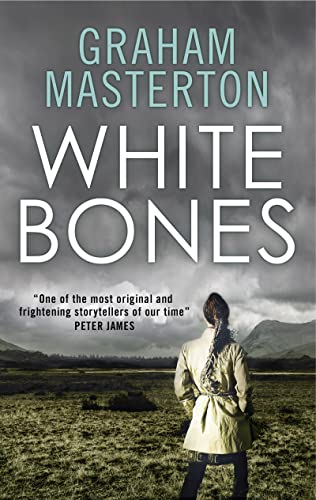 “Graham Masterton is a natural storyteller with a unique gift for turning the mundane into the terrifyingly real. . . . compulsive reading.”

One wet November morning in southern Ireland, a field on Meagher’s Farm gives up the dismembered bones of eleven women. Detective Katie Maguire, of the Cork Garda, is used to dead bodies.

But this is wholesale butchery. Her team of investigators believe that these long-dead women are a waste of police time, but Katie is determined to give them justice, regardless of what anyone thinks.

In this part of Ireland, unmarked graves are not uncommon, sometimes as the preferred place for the I.R.A to hide the body of an executed informer. There are also rumours that they could be the victims of British Army retaliations against the local population for siding with republicans during the bloody war.

But these bones date to 1915, long before the Troubles and the I.R.A. What’s more, the bones bear the marks of a meticulous executioner or perhaps a serial killer, and all the victims were almost certainly skinned alive. But these are no ordinary bones:

“Katie tagged on a tight plastic glove and accepted one of the bones. It had been pierced at the upper end, where it would have fitted into a hip socket, and a short length of greasy twine had been tied through the hole. On the end of the twine dangled a small doll-like figure, apparently fashioned out of twisted gray rags, with six or seven rusted nails and hooks pushed into it. Every thigh bone had been pierced in the same way; and every one had a tiny rag doll tied onto it.”

Just when the investigation is focusing in the past, a young American tourist, Fiona Kelly, goes missing, and her bones, carefully stripped of flesh, are discovered on the same farm.

With the crimes of the past echoing in the present, Katie must solve a decades-old ritualistic murder before this terrifying killer strikes again.

But Katie has her own personal battles to fight, as well. She has to contend with the shadow of her father, a former cop, and a husband she suspects could be having an affair or at the very least dealing in shady business transactions.

A refreshing and marvelous creation, Katie Maguire is a young woman fighting and holding her own in a male-dominated world, and never afraid of mixing it up with the tough guys, be they bad or good. For all her toughness and intelligence, she is not without sensitivities, especially toward victims.

Graham Masterton is a natural storyteller with a unique gift for turning the mundane into the terrifyingly real. The intricacy of the plotting in the book is rendered expertly with a telling hand, making White Bones compulsive reading and Katie Maguire someone we can all cheer for.