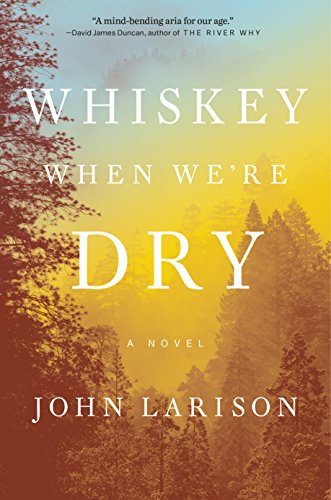 People talk a lot about “voice” when discussing fiction. In this book, voice comes at you loud and strong from the moment you open the cover.

At first, it feels almost contrived, but within a few sentences that wears off and you’re sucked into the mind and reality of Jess Harney in the still-wild West of 1885. Her mesmerizing voice holds true for all 400 pages.

Don’t enter this book expecting a classic cowboys and Indians adventure; this story is no “oater.” While yes, it’s a Western in its grit and gunfighters and landscape, it lacks the romantic heroism typical of the genre.

Instead it’s more of a literary saga, like, say, Lonesome Dove, or similar long, deep, contemplative, character- and place-driven Western novels. It might garner awards for the strength of voice alone, but that would be supported by a masterful evocation of time and location.

While the time is specified, the location never is. Most Americans, however, will recognize in general the plains, mountains, deserts, forests, and canyons that narrator Jesse Harney passes through on her quest to find her brother, Noah.

The center of most action is the fictional Pearlsville, which Jesse captures in one paragraph:

“Pearlsville was the biggest city I ever saw. It was where the gold and timber and beef that drained from them mountains met the straight current of the Union Pacific. The railroad had spawned wealthy businessmen with employment to offer, which done brought workingmen with their families, falling to this after their dreams of homesteading had worn thin.”

There’s no opportunity for Jesse in Pearlsville except for serving as a guard for the rapacious and ambitious governor. He is after Noah for different reasons from hers, but he unknowingly gives her a vehicle to move in Noah’s direction.

Noah is all Jesse has left, and she means to bring him back to the family farm. He abandoned her there five years previous after a violent clash with their father, then became a notorious outlaw. After their father dies (their mother died giving birth to Jesse), she disguises herself as a man and follows “Wanted” posters and rumors across the country to find Noah. When she finally does (thanks to the governor),  she ends up joining Noah’s Robin-Hood-style band of outlaws instead of bringing him home.

It may seem surprising on the surface for a teenage girl to become an outlaw. But Jesse’s loyalty, her desperation, her ignorance, and her extraordinary ability to sharpshoot make it an inevitable outcome.

So does her gender—or seeming lack thereof. Although born female, she’s never given an opportunity to identify with her sex or serve in the narrow roles allotted to women during that era. Jesse is defined from birth by brute labor and harsh environment, growing up without any female guidance and virtually no social interaction or intellectual education. For who she is and what she needs, being female is a liability. Her lack of gender conditioning is what lets her face whatever comes and deal with it at a survival level, in the context of each event.

Her innate morality and strength of character see her through her journey, one step at a time, rolling with each situation as it plays out into the next. When she experiences love, it’s purely from the heart without gender associations, so her relationships are varied and sometimes off-kilter according to today’s social mores.

Her story is so solidly told from her frame of reference, however, that acts or viewpoints that might be considered skewed by contemporary readers come across as reasonable in Jesse’s world.

It’s a hard, crude world that most of us today could not endure. Jesse is one of the few characters in the story who make it to the end. Her journey from rough origins to her rougher fate creates a heavy duty, life story saga that lingers long in memory.

As for the unusual title, it reflects not only its literal meaning—whiskey is a big player in this cold, cruel world—but also its metaphorical one. Jesse describes it thusly:

“A potent whiskey come over me then, all at once. It poured from their eyes when those eyes flinched from me. In that whiskey was proof I too was made of grit and gravel and could not be blown from this earth by simple winds. I racked the Winchester, and for once found what I was after all those times I tipped a bottle.”

Cold and scary. At the same time, the book is flavored by oddments of warmth and poignancy. Early in the narrative, we are treated to this description:

“We come to a desolate section of the trail without even a juniper for shade. It was sagebrush and flat, and the sun beat on us from early to late. The distance quivered in the heat. Dust on our skin baked into a hard crust. Seeds that clung to [my horse’s] mane roasted and give off the smell of fresh bread. For a day and a half we barely spoke. There wasn’t no energy for even daydreams. We pushed on because that’s all there was to do.”

Don’t know about you, but that item about seeds roasting in the horse’s mane and giving off the smell of bread is the kind of detail that brings a moment into up-close-and-personal intensity. Whiskey When We’re Dry is full of such moments, along with plot twists and surprises on all levels. This on top of Jesse’s attention-getting voice marks the author as someone to keep an eye on. Apparently, the film community has already figured that out.