Whiskers in the Dark: A Mrs. Murphy Mystery 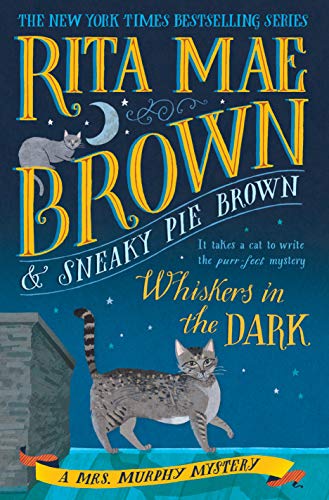 Sentient animals are tricky to characterize in novels without making them cartoonish. Rita Mae Brown, in her long-standing mystery series (this is book 28), has found the right balance, making her critters behave like real animals.

The key characters—cats, dogs, and horses, who often interact with birds, possums, mice, even snakes (and in this book a ghost beagle)—think in human language as they communicate with each other from animal viewpoints. Meanwhile they try to communicate with their loving human who does not understand them.

Despite this, they play a crucial role in solving the crimes. In this case, though, they are more spectators and commentators who help convey the story than actively involved in solving the dual murder mystery.

The series breaks pattern in other ways. While one of its ongoing features is colorful and interesting information about the region’s setting, culture, politics, and history (northern Virginia, Blue Ridge area), here history dominates the plot.

Alternating narratives set up a death each in 1787 and 2018, which apparently have something to do with each other though nobody can figure out what. The modern community where heroine/amateur sleuth Harry Harristeen lives find a grave in which old bones have been dropped on top of conventionally buried citizens. The unknown victim’s neck had been snapped, and she was wearing valuable strands of vintage pearls.

Then Harry and her cohorts come across the body of a man whose throat has been cut. He was, and they still are, enthusiastic hunters using sporting dogs to chase rabbits in competitive trials. They find his body in the woods while preparing for the Hounds for Heroes benefit for veterans. Much damage to the event grounds had occurred over the winter, and the volunteers invest several weekends cleaning up. The victim was one of the volunteers.

Nothing factual shows that he had anything shady in his past to explain being murdered. But everything about the crime suggests somebody in the hounds circle is responsible.

The mystery is a good one: hard to figure out, the clues widely planted. But if you pick up the book because you’re a mystery fan, the process of discovery will be slow going. The mystery is the underpinning of the story, not its driver. You need to want to know all the other stuff woven around it, and enjoy the animal interludes, to have the patience to follow through.

Yet by the end of the book the dual mysteries aren’t fully solved. The author makes it clear in afterword remarks that it’s To Be Continued—mainly because of publishing industry restrictions on her writing a tome. The story is thus intended to be serial, until the two plotlines finish converging. This will be a tantalizing teaser for established fans, but unsatisfactory to someone entering the series at this volume.

That sense of incompletion is enhanced by the writing style. Normally the flavor is friendly and casual but tight; this time it feels sloppy, with many fragmented sentences that just need a few extra words to make it clear who’s doing what, when, and where, as if the author turned in a draft that the editorial team went too light with.

This happens occasionally with long-running series and/or established-name authors, suggesting that the fan base is so familiar with the premise and characters that precision isn’t needed anymore. That may be true, but it shortchanges readers new to the scenario. It also hints at the pressures that prolific authors operate under when they’re not only putting out a book a year, but also might be writing other series or stand-alone works at the same time.

Regardless, the series as well as this volume remain appealing to animal lovers. If they stick with it until the next one comes out, they will surely be rewarded. Until then, new readers have many a back title available to familiarize themselves with the troupe and context. This will set them up to be eager and appreciative when the ongoing story is resolved.