Where the Sky Begins: A Novel 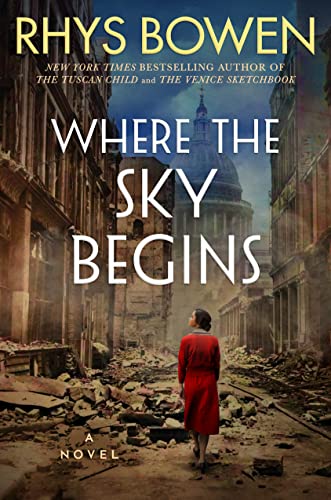 “The writing is so smooth and consistent, and the narrative unfolds so steadily, it’s hard to look up from.”

World War II changed so many people’s lives that we’ll never run out of stories about it. This one covers the German bombings of England and evacuations of people all over the country, especially women and children.

Josie Banks is an example. Raised in the London slums, having to quit school early to help her family, always working-working-working, she’s ultimately left alone in the city with her mother after Josie’s brutish husband is called off to war. And then comes the blitz, which she barely survives. After that she has nothing and no one. Nothing, that is, except her unvanquishable spirit.

Upon recovering from her injuries, she is gathered into the evacuation program along with others bereft of homes, families, money, and belongings. They are spread around the countryside to government-arranged billets for who knows how long.

Josie’s placing seems at first to be a nightmare billet. The elderly widow’s manse is bottom choice on the list, owing to the woman’s haughty, bitter, and miserly behavior—plus the site’s proximity to an RAF air base. The widow’s remaining servant is likewise hostile, making it hard for Josie to fit in.

But Josie won’t be put down. Her will and self-confidence, combined with imagination and an entrepreneurial nature, lead her to make good things happen wherever she goes.

In this case, as she moves around the rural community buying and bartering for scarce supplies, she meets some air and ground crews from the bomber base. Noticing how lonely, scared, and homesick so many of them are, and knowing the odds against them for surviving the war, she’s inspired to create her own unique contribution to the war effort.

But first she must persuade her selfish hostess to open an unused part of the manse and employ its dusty, beautiful things to create an informal eatery for the servicemen. Josie’s most recent, and satisfying, work experience before the blitz was in a little London tearoom. She knows that giving the men a space to unwind through easy company, a homey environment, and wholesome food will not only give them a bit of peace but also remind them what they’re fighting for.

This requires creative juggling of ration cards and favor exchanges. Once word gets around, townspeople and travelers come, too, making the tearoom an instant success.

Through the enterprise she meets a handsome Canadian pilot with a shadowed past. Romance sparks between them, but with her being married and him at daily risk of death, they reject each other’s love. Just as well, for one day he doesn’t come back, and her husband does, and the bombings go on and on. Every time something starts to work for Josie, another disaster changes her path, robbing her of loved ones and opportunity.

Ever more sorrowful, she continues taking whatever comes with pragmatism and the stereotypical British stiff upper lip. This sees her through the end of the war to a future she could never have imagined.

The story forms an admixture of historical fiction, women’s fiction, and romance. It is the latest of the author’s standalone novels about women and families as the collateral damage of war. Despite the overall horror and deprivation of their circumstances, these characters provide heartening tales about courage and resourcefulness. The drama is built into the time and place, sparing the author the need to manufacture it. Instead she focuses on the human side, giving us characters like Josie who overcome hardship through love and kindness, humility, endurance, and common sense.

The combination creates a light read instead of a painful one, even though it’s about the wages of war. At times the story feels a little cliché, and it gets a bit rushed at the end, but that’s forgivable in such a well-crafted and compassionate recounting of historical events. The writing is so smooth and consistent, and the narrative unfolds so steadily, it’s hard to look up from.

Overall, Where the Sky Begins is another solid novel from a prolific and reliable author.