Where She Went: A Novel 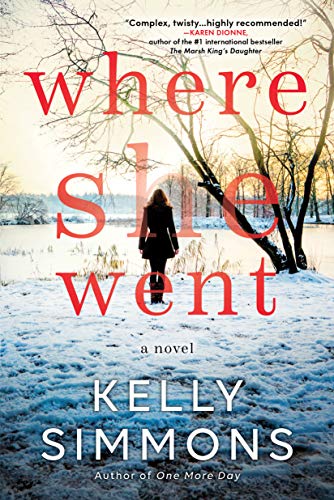 “Where She Went is a fast-paced thriller . . . The characters and setting are well-drawn, the plot is tight, and the writing flows in a way that keeps the story running full-out.”

Maggie O’Farrell’s daughter is missing. Maggie worried when Emma went to college, but it was the normal, child-growing-up kind of fear. Now her daughter has disappeared, and no one understands or recognizes the urgency. Not the police, not the school, not even her daughter’s friends. She wishes her late husband—adulterer though he was—could be there to help, to be a partner. To give her distress the respect it deserves, unlike his former colleagues.

“But now, angry as she was, she missed her husband deeply. Not because he knew better what to do—she’d learned plenty over the years after all—but because he’d go off the playbook. A mother going crazy with grief is a harridan, easy to dismiss. But a father? A cop? He was a vigilante, not to be crossed.”

Emma, however, is not just a simple co-ed, missing for expected reasons. She’s a journalist—or, she wants to be—and has found a story worth reporting. College women—her Semper roommates!—are involved in something she never could have imagined. Who knew young women would compromise their lives to pay their school debt?

“[Emma] also found a four-year-old Inquirer article claiming that hundreds of Philadelphia college students, male and female, were engaged in a variety of activities to pay off their student loans, one of which was ‘sugarbabying’ or ‘sugaring.’ The highest percentage of participants, they claimed, came from Semper University.”

Alternating chapters take the reader through Maggie’s quest to find her daughter and Emma’s investigation of the hot story about the young escorts. Maggie must battle the authorities who won’t believe her or treat the situation as critical. Emma must fight her own peers, and ultimately the people who are behind OurArrangement.com, where they claim nothing criminal is happening. They’re just “introducing friends to friends of friends.”

Where She Went is a fast-paced thriller, inviting the reader to turn yet another page. The characters and setting are well-drawn, the plot is tight, and the writing flows in a way that keeps the story running full-out. Highly recommended for anyone who enjoys suspense, in-depth character study, and an unpredictable storyline.