When You Find Me: A Novel 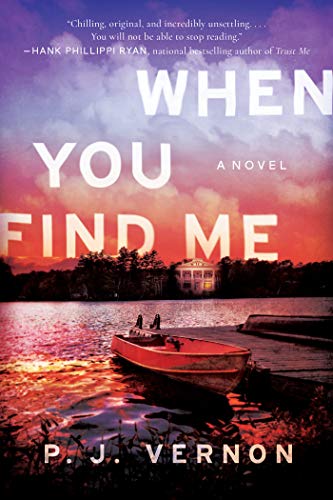 “Readers will end up hoping for more of the same from this stunning new author.”

This story has it all. Family dysfunction, substance abuse, old secrets, betrayal, madness, and a missing husband. In other words, prepare for a gripping read, and be sure to start early. Your eyes could be on the pages until sunrise.

This suspense filled book is another in a long line of compelling mysteries coming out of Crooked Lane, a publishing house that is releasing book after book after book of gripping suspense written by a stream of talented new writers.

Author P. J. Vernon introduces the reader to Gray King Godfrey and her husband Paul Godfrey as they arrive at the King family estate in South Carolina for the holidays. After Christmas Eve church service with Gray's sister Charlotte and their mother Joanna, old friends invite Gray, Paul, and Charlotte to join them for drinks at a local pub.

Paul reluctantly agrees to go, and makes Gray promise to have no more than one drink. With Gray, glasses of wine always turned into bottles, and she'd already been on her way to a stinking drunk when they got off the plane. Gray promises to take it easy at the get-together, but immediately begins to calculate and connive how many doubles she can sneak in during the evening without Paul realizing it. He hates her drinking. Her sister tolerates it. Her mother is seriously annoyed by it.

Gray is successful in her seek-a-drink mission, and after becoming rip-roaring blasted and making a spectacle of herself on the dance floor, she experiences a blackout. She wakes the next morning with a raging hangover and a missing husband. Neither she nor the family are too terribly worried at first. They surmise that Paul is simply cooling off somewhere after a late-night argument with Gray.

As for Gray, she doesn’t remember a thing. Not the argument, not the drive home, not how she—or whoever—undressed her and got her into bed. Neither Gray nor her family see any reason to contact the police to report Paul missing just yet.

But everything changes after a mysterious phone call:

Annie's chilling messages about Paul and his whereabouts continue, sending Gray into a tailspin. When Annie fails to show up for a prearranged meeting at a local restaurant, Gray, an unreliable narrator if there ever was one, begins to panic. But that doesn't stop her from ordering two more bottles of wine. To go.

What follows are enough plot twists and misdirection to keep readers guessing until the bloody denouement and the final surprise on the last page. A few readers might see through some of the author's telegraphed foreshadowing, and maybe figure out at least one of the two primary plot twists. But even that won't lessen the impact as the action unfolds.

It takes a while for this story to come together. It opens slow with a whole lot of backstory, but picks up the pace pretty quickly. Chapter four would have been a good place to start.

But those are minor flaws. None of them mean that Vernon's writing isn't first class. It is. His original, inventive word choice and descriptive imagery, if a bit verbose at times, are a joy to read. Even his slightly overwritten, fanciful descriptions that take a re-reading or two to visualize are worthy of admiration. He somehow makes them far out and on point all at the same time:

"Beneath an overcast sky, the house sat like a rotting log concealing secrets beneath its moist belly. A malignant tumor latched onto the surrounding marsh-side bluff . . . White siding peeled like curling fingernails . . . Snaking vines withered into stringy skeletons rather than grow lush."

Readers will end up hoping for more of the same from this stunning new author.