When You Are Mine: A Novel 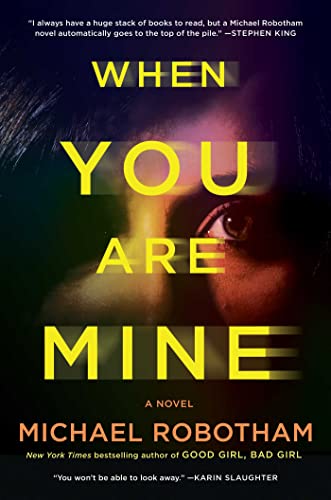 “When You Are Mine serves up top-notch suspense and psychological insight. Double-lock the door, keep some lights on, and try not to read this one too close to bedtime.”

We all know someone who’s done it: gone overboard trying to “save” someone else from a mistake or a tough situation. It’s even a moral imperative sometimes. For Philomena McCarthy, an officer with London’s Metropolitan Police, it’s the slant that takes her beyond where she should step. Trying to “rescue” young women from an obviously violent but socially powerful man won’t get her thanked. Just in trouble.

On the other hand, Phil’s no stranger to trouble. Only daughter in a known mobster family, she’s wrestled her way past more hurdles than most, to get this prize career. And she’s been fortunate to find a more than decent man who loves her as much as she loves him; wedding bells are about to ring.

But with Michael Robotham, a British author who lives in Australia, even the best situation in life is only a stage on which terror can rise up and threats can escalate. In this psychological thriller, Phil’s kindhearted “rescue” of domestic violence victim Tempe Brown opens the door to terror and humiliation, with Phil’s job under threat, her integrity impugned, and charges against her. Charges that will become increasingly serious, and that her loving family—even when she decides to reconnect with them—isn’t equipped to battle for her.

After all, Phil can see her family pretty clearly: her dad and his brothers, all tackling different aspects of the mob-style criminal life that advances their business. When Phil opts to reconnect with her father for his 60th birthday, she’s overwhelmed by how much she loves these men and has been taken care of my them. However: Her dad is “such a charming old bugger. He’s like one of those animals that looks harmless, even cuddly . . . but behind those big, intelligent eyes and wide, welcoming face, there will always be the mind of a predator.”

Meanwhile, for way too long, Phil buys into Tempe’s own “white knight” syndrome, even after her fiancé begins to call Tempe “weird.” Phil admits, “She says things to shock people or to prompt a reaction . . . I think she’s clever the way she puts people off their stride. She makes them think.” It won’t feel so attractive, though, once Tempe’s claws begin to show.

And that makes her re-think her family connection, as the police force begins to cut her out and perhaps frame her. After all, Phil in adulthood has sensibly avoided her dad and uncles. People disappear around them, or get badly hurt if they’re just mildly in the way. “These are the reasons I have avoided my family, but there are other reasons for embracing them,” Phil reflects. “Morality isn’t a rule, or a plumb line that swings back and forth. It is something that is part of each of us like a gene that evolves over time, but unlike other genes, it is affected and altered by the decisions we make and don’t make, by compassion, empathy, forgiveness.”

Robotham is a pro at pushing the tensions and risks to terrifying heights, embedded in the almost philosophical tenderness of Phil’s family reckoning. He also nurtures the conflicts and tensions of British class conflicts, waving them in as fan dance that can blind a person to danger because of the huge effort to be tolerant, to ignore one’s own reactions that must be bigotry, instead of honoring them as reality. Phil’s naiveté is sure to crush her, in the face of the cynicism of those around her. Or is it?

When You Are Mine serves up top-notch suspense and psychological insight. Double-lock the door, keep some lights on, and try not to read this one too close to bedtime.