When You Find Out the World Is Against You: And Other Funny Memories About Awful Moments 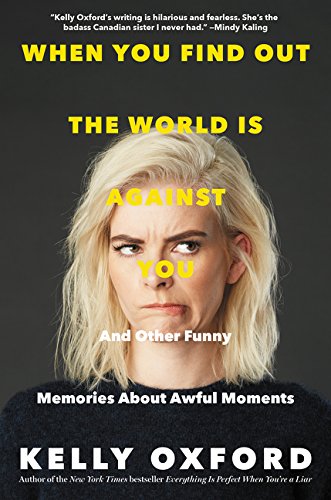 As the old saying goes, “Close, but no cigar.” When You Find Out the World Is Against You and Other Funny Memories About Awful Moments by Kelly Oxford is a book that tries to put a humorous spin on the author’s personal experiences of embarrassment, shame, and awkwardness.

When an author writes about uncomfortable or negative experiences for all the world to view, it takes intestinal fortitude and deserves congratulations. It is never easy to publish memoirs, especially when they involve airing embarrassing dirty laundry. As is often suggested about comics in general, negative experiences are reformulated into jokes and funny personal views.

Despite book jacket positive reviews from prominent comedians and from a few readers on bookselling websites, the book fails to be “hilarious.” The author writes with crisp words and phrases that in written form mirror the verbal timing of a standup comedian. The reader can almost visualize a comedy club performer standing at the microphone with exceptional timing, but ultimately having to say, “Hey, I’m dying up here.” Despite an occasional chuckle, there simply are very few laugh-out-loud moments. When quoting a four-year-old daughter, the dialogue sounds like it is being produced by a sarcastic overly mature teenager. The author, who describes herself as “boy crazy,” is depicted as nonstop fixated on males, relationships, and body image.

The latter portion of the book takes a much more serious tone. Her reactions to a parental divorce and the sudden death of a beloved friend and father figure are painfully and poignantly described. Even more so is the author’s reaction to the recording of Donald Trump saying about women “Grab them by the pussy. You can do anything.” She describes her own demeaning sexual experiences and asks others on social media to write about theirs. She receives an overwhelming number of responses from other females who have been sexualized, objectified, sexually assaulted, and raped. It is painful to read about the frequency with which these behaviors occur—almost to the point of leaving a universal stain on male society. During this portion of the book, there is minimal attempt to make the situations humorous—if indeed they could be. The author’s experience is documented clearly and in a way that will make all readers, whether male or female, cringe. If this part of the text were a memoir meant to the serious and heartbreaking, it would succeed. These pages however, set an entirely different tone than the first half of the book and its title.

Don’t expect a lighthearted funny book. This is indeed a cumbersome, difficult read. Perhaps this should have been two books, not two sections of one book.