When Women Ruled the World: Making the Renaissance in Europe 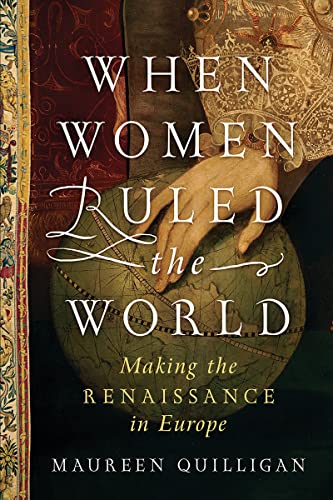 “threads of When Women Ruled the World make up a history of women not just as rulers but as women who were rulers. . . .”

Maureen Quilligan weaves an epic saga of a “remarkable number of European women who were in positions of premier authority in the sixteenth century” in When Women Ruled the World. Specifically, the author explores “a quartet of Renaissance queens whose crowded lives were intertwined by complex blood and marriage ties”:  Catherine de Medici, Elizabeth Tutor, Mary Stuart, and Mary Tudor.

This work also explores the atmosphere of the female “regiment” in power in Europe’s Hapsburg, Medici, Stewart, and Tudor families. This environment allowed for the influence of these female monarchs. related (and in more than one way) women of prominence make appearances throughout this work including Isabella of Aragon and those of the Peace of the Ladies in 1529. The men in their lives also find discussion.

Popular general misconceptions that Quilligan corrects include the motivations in the personal relationship of Elizabeth I and her cousin Mary Queen of Scots. They carefully planned a succession to the throne of England. If they succeeded, the British Isles could be united in peace, and even the conflict between the Protestants and Roman Catholics could ease.

The literally deadly seriousness of these politics made its positive outcome only possible in a long game. Throughout When Women Ruled the World, Quilligan reminds the reader of the power and dangers of the public’s opinion of the time. These four queens sometimes failed, as the author explains in describing their roles in infamous “accidental” murders that changed history.

Catherine de Medici, mother of monarchs, “has become one of History’s favorite villains” but what was falsehood, necessity, or just misunderstood? Quilligan argues for analysis and study of these four queens over popular prejudice and legend. Catherine became a part of the conspiracies, plans, and schemes from the beginning, sometimes literally as a would-be king maker.

Becoming a female monarch had the usual, and sometimes deadly, problems of claims to ascension. Women also had to contend with prejudices against anyone of their sex as a ruler or their failures to produce male heirs. The author finds particularly good examples of these obstacles in discussing Roman Catholic Mary Tudor and her successor the Protestant Elizabeth I as rulers of England. Mary taught her half-sister and successor Elizabeth I to be “mother to her people, gallant orator in a crisis, a women wedded to the realm.”

Quilligan writes of books, gifts, jewelry, poetry, sewing, tapestries, etc. that these women shared but as “inalienable objects of political resistance.” Beyond that, clothes served as among the few symbols of power and wealth. A well-crafted outfit of cotton, fur, silk, and wool could cost more than a house.

This relatively short book devotes much space to the seemingly incidental such as the legends of the Mary Tudor Pearl, the baptismal fount of James VI of Scotland, the St. Bartholomew’s Day Massacre, the Armada, and Hadrian’s Wall. Such threads of When Women Ruled the World make up a history of women not just as rulers but as women who were rulers, however.

Much of When Women Ruled the World involves Philip II of Spain. He did dominate much of the world and was “Mary Tudor’s husband, Catherine de Medici’s son-in-law, Elizabeth Tudor’s suitor, and . . . Mary Queen of Scots’ declared heir.” He “understood that women were capable of ruling and rule well.” He sent his army and fleet against Elizabeth I (Tudor) in a campaign to decide the future of the world.

These women did not rule the world, but they helped to build empires that would dominate the globe. When Women Ruled the World benefits from scholars, often women, who have delved “into an untouched archive of evidence that Renaissance women’s lives were culturally consequential at all levels of society.” It also comes from a “new anthropological theory that has rewritten the ‘rules’ of human society.”

The author keeps the narrative focused when it could have become mind numbingly complicated for readers not familiar with the subject, even as it discredits popular misconceptions about commonly accepted misinformation. When Women Ruled the World has annotation, a bibliography, and illustrations.