When Women Ruled the World: Six Queens of Egypt 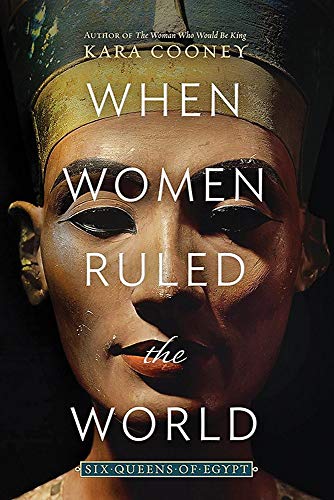 "When Women Ruled the World (or at least the Egyptian part of it) draws the reader into many less known aspects of ancient history with an informal prose and style for the general reader."

Kara Cooney writes a great deal about feminine power in ancient Egypt in When Women Ruled the World, but a lack of surviving source material and the rareness of female rulers made that research difficult. The author, for example, has found little more on Neitthhotep and Nitocis.

This book uses the six female pharaohs as a framework for the author to explore under discussed history in 3,000 years of "a culture so beautiful—with its golden masks and colossal statues" and "also ruthlessly authoritarian." "Egyptians were typically silent about such unsavory historical details that marred their perfected kingship."

Each of these women who ruled was "put in power by an Egyptian system that needed her rule" and each came to power by a different route. They opposed history as abnormal and anathema.

Women "were the cautious choice for a circumspect and prudent Egypt when it seemed that all was lost." "A female could rule only in [this] the most unequal of social systems" despite "the most totalitarian and authoritative of governments."

The author explores why the royal harems with sometimes hundreds of women did not produce enough of the needed male heirs. Also, Cooney asks, looks at the question of why "choose the path of the female queen at all, instead of picking a capable man in some way related to the Royal Family?"

When Women Ruled the World touches on homosexuality, incest, pharaohs who lived too long, infertility, and much more in the context of power. "The Egyptian female could be witch or goddess, ferocious protector or vulnerable woman, temptress or mother."

Even queens not ruling "didn't compete with the patriarchy but rather supported it." "The masculine and the feminine were two sides of the coin of power." "The Egyptians were light-years ahead of us in their trust of female power." Nonetheless, "a woman could never have stepped into power with only her ambition" but based on the needs of her people, on consensus."

In these specific instances "female rule was not only permitted, but required." "Only a woman could put a susceptible and weakened country on a better footing." Egyptians would also "suffer a woman ruler than allow an unrelated warlord to step into power."

The queens served to guarantee "prudence, safety, and protection" for "their fathers, husbands, brothers, and sons." "Female rule kept power within the family unit" as "there is no feminism to speak of at this point in history." "It's as if the harem were created to give all the royal women—the King's Mothers, Sisters, and Daughters—the home court advantage."

Merneith became one of the first rulers of Egypt because of a son too young "to handle the practical decision-making" as pharaoh. This came in an age when funerals of a king came with "sacrificial burial" of "elite women and men—the young, the healthy, the valuable."

Merneith buried her husband Djet with hundreds of corpses of his entourage o show the power of a pharaoh. Her son buried her in a tomb literally fit for a king and with 120 sacrifice victims. Did the Egyptians remember her, Cooney asks? "The answer may be the expected and deflating no."

Neferusobek marked a first in known history. She would claim the highest office in the land—the kingship itself—for the simple reason that there was no royal man to take it." Despite and because of her failure to produce an heir, she "became Egypt's first female king." In her less than four-year reign, she ruled in every way as a pharaoh and as a woman.

The now famous Hatshepsut came to power as regent for a son not her own. She remained in power "for more than two decades: the longest tenure of any female leader in ancient Egypt." Her long list of accomplishments "left Egypt better off than she'd found it."

A well-educated and shrewd politician, Hatshepsut came from an environment of influential royal females on the highest levels. Her nephew and likely son-in-law Pharaoh Thutmose III had no problem with sharing power with her but his much later "death marked a momentous shift away from female power."

Nefertiti became queen in an era of unprecedented excess and wealth. Her husband Amenhotep IV (later renaming himself Akhenaten) would "implement the most extreme of religious changes and overturn the most traditional rites and belief systems" in a joint rule with Nefertiti "of ideological excess."

Akhenaten had his wife depicted "not only decidedly unattractive but animalistic," as he also had himself rendered. Nefertiti's "expanded political role is just now bring uncovered by archaeologists and historians" but she remains "all but invisible as a woman of real power."

"Distrust of royal women . . . was unwritten but displayed everywhere in Ramesside Egypt," what followed Nefertiti's 18th dynasty. "In the midst of a civil war between rival factions of Ramses the Great's family," however, the non-royal Tawosret ruled as "a little known, yet formidable, Egyptian female king."

Tawosret first served as "the regent for a [crippled boy] king nobody expected, to whom she was in no way related, protected by a man feared and hated." After the assassination of the all-powerful minister Bey and then the death of the boy pharaoh," she ruled in her own right for her few remaining years.

Cleopatra VII needs almost no discussion, as she became the subject of histories, movies, and plays. she "seized Egypt on the cusp of its absorption into the Roman Empire, and she manipulated statesmen of that empire to fight off Roman domination." Cooney points out that Cleopatra alone of the women in this book "combined brilliant leadership with a productive womb."

This last pharaonic ruler also had "bald ambition translated directly into survival." She "played it close to the vest, always representing herself as fully in control, idealized, godlike, perfect." None of the children of her father Ptolemy XII "would die a natural death," however, including famously herself.

"Cleopatra's reign," however, "presents historians with a different challenge" as almost all that survives of her story comes "from Roman politicians or rhetoricians opposed to her agenda and outside of her cultural milieu." "All of it was written by Romans, so all of it must be regarded with suspicion."

When Women Ruled the World (or at least the Egyptian part of it) draws the reader into many less known aspects of ancient history with an informal prose and style for the general reader. Sometimes, such as with comparisons to modern American politics or phrases like "when these alliances went south" the writing becomes flippant with a humorous bent. The book has documentation and includes a bibliography and section of illustrations from artifacts and ruins.