When We Lost Our Heads: A Novel 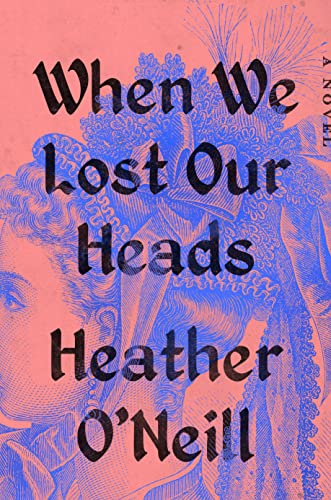 One of the joys of reading literature is discovering an astute author’s powers of observation and finding these deliciously woven throughout the narrative.

Heather O’Neill, in her latest novel When We Lost Our Heads, knits well-observed statements into the colorful patchwork of her quirky, vibrant story. Her prose is riddled with simile; sometimes these delightful images capture the situation, the object, the person described, and sometimes they pull the reader into distraction. “Watching her handwriting was like watching a kite in a breeze. Or a cat playing with a string.” Or describing “bottles of dried mushrooms. They looked like the appendages a witch had severed from children murdered in the woods.” At once off-putting and seductive, the temptation in this kind of narration is to become obsessed with the cleverness of an imagination seemingly influenced by hallucinogenic drugs.

To begin, O’Neill introduces the reader to two main characters who are so self-absorbed and so blunt that they resemble one another to the point of confusion. At first, because of this self-conscious cleverness, the reader has difficulty feeling any kind of empathy or even identification with either of the two main characters. Marie and Sadie are each so defiant and self-satisfied that they are instantly annoying characterizations.

This begins to change when they are 12 years old and spontaneously fall into an obsession for each other. At this point, the reader can see the flaxen color of Marie’s hair and the dark, dramatic flowing mantle of Sadie’s. Marie is pampered, her father the obscenely rich owner of a sugar factory; Sadie is inexplicably sadistic, born to a family striving for political and social gains. Neglected by her mother, Sadie is intelligent, with a quick mind and a defiant spirit. Marie's self-flattery is buoyed by the constant reminder of her princess-status: her image on every bag of sugar the factory produces. Both girls discover their healthy appetite for mutual envy when they meet each other.

Woven into the story is O’Neill’s historical vision of society in 1873; her novel is told against the backdrop of the end of the 19th century and what has been dubbed The Second Industrial Revolution. Both Marie and Sadie live in the Golden Mile neighborhood of Montreal, and we see the exaggeration of the privileged life in O’Neill’s exquisite simile; we also experience the reality of the brutal lives of the factory workers. O’Neill highlights the limits of women’s lives as sexual objects and disposable workers, the violent gender imbalances embedded in society, and the excesses of the rich against the despair and suffering of the poor.

In a bizarre bet between Marie and Sadie, both girls face off in a duel and accidentally kill a maid who steps between them—getting hit with one bullet from each of their two guns. Sadie is blamed for the scandalous murder and exiled to a boarding school where she discovers her “life passion”—writing. Years later, unable to forget Sadie, Marie summons her back, with a ruse to marry Sadie’s brother. But when Marie’s father dies suddenly and Marie is left with his estate, she understands that once she marries, she will forfeit all her agency and wealth to her husband. Once she decides to call off her engagement to Sadie’s brother, the trajectory of the story shifts.

Ultimately Sadie is kicked to the street in The Squalid Mile, tossed out by her family and temporarily lost to Marie. Here she meets a large woman named George (who dresses as a man) in a brothel, and for the first time in the novel, Sadie’s quirky and defiant personality becomes understandable and loveable. O’Neill introduces Mary (the illegitimate daughter of one of her father’s indiscretions and a doppelganger for Marie) separated by the chasm of class but driven to insinuate herself into her half-sister’s life to get her due. Why is she exiled to poverty and Marie lives the pampered life of the ultra-rich? With an uncanny resemblance to Marie, and exquisite bakery confections made with the sugar of the factory, Mary becomes an extreme character who drives the narrative to its chaotic, revolutionary conclusion.

O’Neill’s five-novel winning streak began with Lullabies for Little Criminals, a coming-of-age saga featuring an irresistible protagonist with an observant voice that was at once incisive, hilarious, and unsettling. When We Lost Our Heads shares the oddball descriptions so characteristic of O’Neill’s voice as a narrator and combines brilliant observations with a simple style that sometimes reads like a children’s book—or a writer trying to sound like she is 13 years old. This is both the novel’s attraction and its weakness. O’Neill’s characters inhabit the gritty streets of Montreal; most have their vocabulary of experience formed around their survival in this vibrant, brutal, unjust place where the characters have nothing to lose. This could be the reason that a description of their reality by necessity sounds like a slap in the face. O’Neill uses it to perfection as the narrator, challenging gender roles, unspoken imbalances and systemic injustices, as well dazzling mot cles about the human condition, drops delightful discoveries that describe complex realities in a few, short sentences.

The historical world of the late 1800s that O’Neill recreates is fascinating and highly entertaining due to this sassy point of view. Although men are described in context of their privilege, violence, and power, in When We Lost Our Heads, the all-knowing narrator describes everything from the POV of a woman or a girl. Men get sliced down to size by her piercing wit, and O’Neill writes a satisfying herstory interpretation of events. The plot satisfies with twists and turns to the end, but it’s the audaciousness of spirit emboldening most of her female characters that makes this novel shine. “The crowd was right,” she writes. “When women were this angry, they were always right.”