When the Stars Go Dark: A Novel 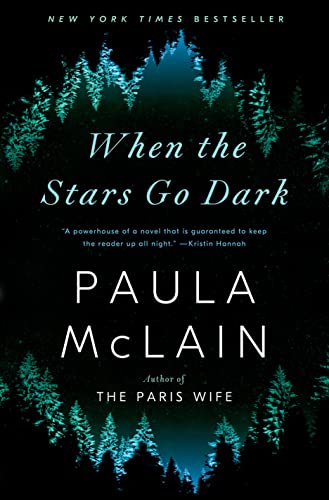 “When the Stars Go Dark is an intriguing, harrowing story that suggests we should never grow comfortable in a false sense of security . . . It’s a masterfully written story of resolution and reconciliation that operates on multiple levels of time, mind, and spirit.”

Paula McClain’s When the Stars Go Dark lures you into engaging with the story lest you miss a moment of its well-wrought beats. This is a haunting, intelligent novel for the discerning reader; the thinking man’s page-turner; a riveting crime-detective story seen through the wounded soul of 35-year old narrator Anna Hart whose life comes full circle as she tries to outrun her past.

Abandoned by both parents, Anna survives a handful of near misses in the Northern California foster care system before landing as a wary adolescent with Eden and Hap Strater in the picturesque, coastal town of Mendocino. Easing out of her shell is a process, and McClain delivers it strategically throughout this wonderfully paced suspenseful story. Now weighted with her own heartbreaking problems, which she left with her husband in San Francisco; Anna flees like a homing pigeon to the only place she ever felt safe. “For seventeen years, I’ve stayed away from Mendocino, locking up the place inside myself like something too precious to even look at.” Of Mendocino’s idyllic locale, Anna explains, “The first time I saw Mendocino, it hardly seemed like a real place. The tidy streets were lined with gingerbread houses, most of them white with lavish trim and picket fences. The whole village stretched out on the shaggy, rounded bluff against the Pacific, small enough to take in all at once, with one grocery store, a handful of cute shops, two cemeteries, and an elementary school.”

For understandable reasons commiserate with her personal narrative, Anna Hart is a detective who specializes in missing children. We are on a mission with Anna. Though newly arrived in Mendocino without a plan, she cannot resist joining childhood friend—now sheriff—Will Flood, in trying to solve the abduction of 15-year-old Cameron Curtis. The similarities in Cameron and Anna’s upbringing are unsettling, prompting Anna to reflect on her childhood, “I’ve had too many mothers, and not enough mothering.” Her stoicism is impressive. Anna stays focused on the month-long case to the point of obsession, even as her past and current troubles threaten to roil to the surface.

Anna is uniquely qualified as an outdoorswoman due to her relationship with Hap, who is employed as lead warden by the National Forest Service. He is a man of few words with great respect for the outdoors, and Hap’s parental boundaries are tested when Anna spends the night alone in the woods. In a life-changing statement on the wisdom of outdoor survival skills, Hap responds, “If you’re going to be out here on your own, let’s get you smart about it, so you can take care of yourself.” His sage-like tutelage of the natural world is of paramount importance to the story, and McClain is at her finest when depicting the woods. “Morning sun comes through the canopy in spears. Light catches dozens of spiderwebs, turning them into diamonds. Some are the size of maple leaves. Others are tiny and pearled with dew, like fairy hammocks or swings. It’s the kind of place that can make you believe almost anything: that whole civilizations can live under mushroom caps; that the usual laws have never fully landed here or mattered.”

When the Stars Go Dark is an enthralling foray into the step-by-step mechanics behind the hunt for a child abductor that grows with surprising linkages into the search for a serial killer hiding in plain sight. With painstaking detail and knowledge of the criminal mind’s minutiae, Anna Hart observes, “The media likes to sensationalize psychopaths and evil geniuses like Charles Manson and David Berkowitz, but in real life, people who commit serial murders are typically of average intelligence, and rarely show an obvious degree of mental illness, at least not on the surface.” The detective is equally aware of the chilling fact that “Most serial killers have a comfort radius and a clear anchor point they hunt from, a narrow range of territory they’re intimately familiar with.”

When the Stars Go Dark is an intriguing, harrowing story that suggests we should never grow  comfortable in a false sense of security even as it praises the merits of small-town community life. It’s a masterfully written story of resolution and reconciliation that operates on multiple levels of time, mind, and spirit. As for the poetic title, McClain hits a high note. In her desperate search for the perpetrator in what dovetails into multiple, missing child cases, Anna Hart is not beyond listening to an intuitive’ s insightful suggestion. “This is your life’s work for a reason. The things you’ve lost have drawn you to help these children and young women,” the psychic says to Anna then goes on to hit the bull’s eye, “The ghosts of the kids you’ve helped, they hang on you like stars.”