When the Stars Lead to You 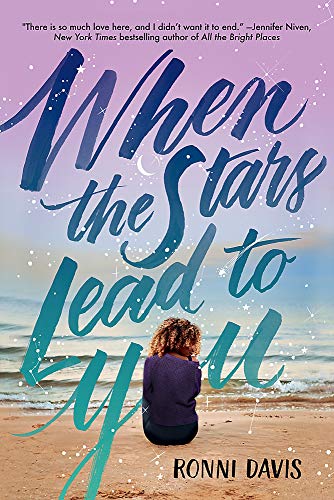 “When the Stars Lead to You holds a diverse cast of characters and deep discussions about mental illness, race, and sex.”

“You’d think someone who wanted to study the stars would know better than to wish on them. There was no logical reason for me to put so much hope in exploding balls of hydrogen and helium, especially since they were millions of light-years away. But it didn’t matter. Every single night, I turned my head toward the sky, closed my eyes, and dreamed.”

Devon is doing fine on her own. She just wants to finish high school, go to the college of her choice, and learn about the stars. But then she spends the summer with her cousin at the beach and meets Ashton. They have a magical few months, but when it comes time to enjoy their last day together he disappears. Devon is devastated, and spends the next year trying to get over the heartbreak. She never hears from him again . . .

. . . until the first day of her senior year. Suddenly there he is, across the hallway at her school. Despite how he treated her, she is drawn to him. She can’t say no, even though she knows how much he hurt her, and how she has worked to pull herself together and move on with her life.

“Ashton was distracting me way too much. Look how quickly he’d managed to make me forget about scholarships and McCafferty and school. Look how I was sitting here right now trying to analyze him when I needed to just stop. But I couldn’t stop it. Memories from that summer rushed back like comets. Him and me, walking along the boardwalk, holding hands and sharing our hopes and dreams and fears. Sitting in the surf together, laughing while the waves knocked us around. Kissing deeply under the stars. I’d known his every heartbeat, his every breath, and I’d wanted it all. I’d wanted all of him . . . and I’d wanted him forever.”

Devon is drawn back into his world, only to find a maze of mental illness, racism, and classism. Her own life is put on hold, and then into a tailspin, as she tries to make sense of Ashton’s behavior and what it means for her and her life plans.

When the Stars Lead to You holds a diverse cast of characters and deep discussions about mental illness, race, and sex. Parts of it are disturbing, such as Devon’s lack of self-control and apparent struggle to do what is best for herself instead of following her heart and hormones completely. For teenage girls already struggling with self-esteem and putting themselves first, this could perhaps make them think that allowing others to control their lives is not only possible, but in some cases unavoidable.