When the Shooting Stopped: August 1945 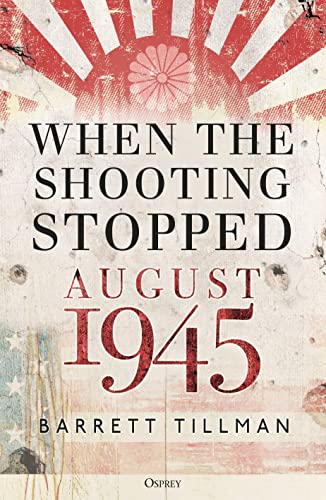 “You learn a lot, change a few long-held assumptions. And it goes down relatively easily, because it’s so well-written—by an author with hundreds of flying hours in historic military aircraft.”

Wars don’t end neatly. As sometimes shown in trench warfare dramas like The Passing Bells, the tragedies continue to unfold even as the all-clear signal is sounded. Barrett Tillman’s When the Shooting Stopped: August 1945 focuses closely on the very end of World War II, and in particular that one crucial month that brought us VJ Day, the atomic bomb drops, kamikaze last stands, and much more.

Tillman, whose father was a World War II aviator (he has an apparent cameo here), has written more than 40 books, almost all of them focused on the air war. He knows the territory, but this book is a bit different from titles like Wildcat: the F4F in World War II (1983). The battles in the sky are understandably more detailed, but the scope is wide, covering what was happening on land, air, and sea.

It’s a complex story, very well told here. The Nazis have surrendered, but the soldiers who fought from North Africa to Berlin are waiting for orders to take part in Operations Olympic and Coronet, the planned invasion of the Japanese home islands. The D-Day landings involved 150,000 allied troops; these two operations together, code named Downfall and planned to commence in November 1945, would have involved almost one million—the largest amphibious landing in history.

Given the Allied experience liberating the Solomon Islands—an entrenched enemy willing to fight to the last combatant—the casualties of such a campaign, on both sides, were expected to be enormous. But it didn’t happen, and Tillman looks closely at the forces at work, especially the nuclear bombing of Hiroshima and Nagasaki. His lens is wide angled enough to also include both the view from the cockpit of the Enola Gay and the horrific experience of Japanese civilians on the ground after the bombs were dropped.

There’s scholarship here on the diplomacy involved, but the story of Hitler, Stalin and Churchill has been many times told. August 1945 is strongest when focusing on the war from the vantage point of ordinary soldiers, especially in cockpits and on the decks of fighting ships. Some samples:

Many of these deaths occurred after tentative peace feelers began to emerge from Japan, relayed through roundabout channels. The terms included preserving not only the emperor but also the country’s military structure—a clearly unacceptable offer. But reports that Japan would sue for peace gave hope to a war-weary world. The Nagasaki bomb was dropped after no unconditional surrender order was issued.

A chapter on the Soviet invasion of Manchuria is hugely instructive. Stalin declared war on Japan only as the war was ending in August 1945—because he wanted control of southern Manchuria, which was occupied by the Japanese. On August 9, more than 1.5 million Soviet troops were committed to what became the last major offensive of World War II. Equipped with American Studebaker-built trucks, Sherman tanks, and other Allied equipment, more than 70 infantry and motorized rifle divisions launched a brilliant surprise attack that was hugely successful—and over by August 22. The Soviets losses were 11,000 dead, 24,000 wounded. This was described as “a nearly bloodless conquest of an immense, productive area.”

It's that kind of book. You learn a lot, change a few long-held assumptions. And it goes down relatively easily, because it’s so well-written—by an author with hundreds of flying hours in historic military aircraft. This passage describes an end-of-war dogfight:

“As the two American flights reversed into the diving Japanese dozen, gloved fingers curled around triggers in molded plastic stick grips. In that desperate maneuver the four-plane divisions lost cohesion as wingmen slid abeam of section leaders, breaking into fighting pairs. Any semblance of organization was lost as both formations shredded at the merge, hosing off 50-caliber machine gun ammunition in one direction and 20-mm cannon rounds in the other . . . One Hellcat caught a volley of explosive rounds and pitched upward, out of control. Another broke away, streaming smoke, seeking the sanctuary of the sea. A Zeke lost a head-on encounter with six Browning .50s, gushed flame, and snap-rolled to destruction. Thus began the manic, unchoreographed dance that was dogfighting. If the war was seemingly over, the dying was not.”