When She Was Good (Cyrus Haven) 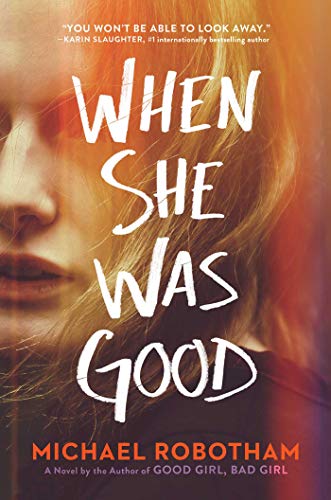 “When She Was Good makes a desperate plea for the forces of love and justice to prevail. And with each tense additional revelation, it’s clear there’s only disaster ahead. The question is, Whose lives will be sacrificed?”

Michael Robotham’s second crime novel to feature forensic psychiatrist Cyrus Haven (his 15th overall) pits two good people and one abused teenager against a possible network of pedophiles in Britain with unlimited power. When She Was Good is a page-turner from the start, and only in part due to the rapid and terrifying action taking place. The really compelling aspect is, these three people deserve so much better.

Take Evie Cormac, being hidden in a secure children’s home—except the place has few homelike characteristics, is run by grim people without humor or affection whose main role seems a cross between a school principal and a jailer, and the only friend she’s got is a younger girl unable to remember the insults and rebellions that pattern Evie’s life with others. It’s not just that Evie’s blunt to the point of rudeness most of the time. It’s that she knows if someone’s lying to her and won’t put up with it. So who’d want to be her friend or share power with her?

Actually, Cyrus Haven is desperate to find the keys to freedom for Evie. Dodging the police departments and national security team with which he’s supposed to collaborate, he’s set himself a mission of finding out what really happened to Evie before she was rescued. And then corralling the perpetrators so she can have a life.

But when he locates and tries to recruit Sacha Hopewell, the woman who rescued Evie, Sacha’s not optimistic. After Cyrus does his best to convince her that Evie needs the help that only openness and revelation can provide, Sacha admits to Cyrus that she’d tried to reassure the child herself:

“Sacha looks up from her empty bowl. ‘Do you know what she did?’

I shook my head.

‘She gave me this look that laid me to waste inside. It was so full of despair, so bereft of hope. It was like dropping a stone into a dark well, waiting for it to hit bottom, but it never does, it just keeps falling. That’s what frightened me. That and her voice, which came out all raspy and hoarse. She said, “Nobody can protect me.”’”

Alternating voices, between Cyrus and Evie, Robotham lays out terrifying experiences and threats, one on top of another, like a fearsomely tall stack of misaligned playing cards. Any touch or breath could send the whole stack toppling. And although Cyrus won’t realize it for a while, his own connections and careful inquiry into Evie’s past are the triggers that lead the deadly forces who can’t afford to have the teen survive and speak.

While Cyrus tumbles over and over into the self-deception that he’ll be able to protect this battered child to whom he’s given his heart—for her courage, her honesty, her disarmingly dangerous refusal to collude with liars—Evie’s correct when she denies his ability to save her. Even the police force can be corrupted by the politically potent and wealthy circles that Cyrus has pried open.

When She Was Good makes a desperate plea for the forces of love and justice to prevail. And with each tense additional revelation, it’s clear there’s only disaster ahead. The question is, Whose lives will be sacrificed?—beyond that of Evie’s only friend Ruby, whom she discovers dead in her own bed:

“Poor Ruby. Dumb Ruby. Deep as a puddle. Thick as a plank. As friendly as a puppy. She’s dead because of me. . . . Ruby’s eyes were open and one arm lay across her waist, another on the pillow. My pillow. . . . They expected to find me. They thought they killed me.”

Word of Evie’s survival is all it takes to launch further attacks. Don’t try to get anything else done; just keep reading. The only way this book will let you go is if you walk, or run, with Evie, Cyrus, and Sacha to the last page.