When McKinsey Comes to Town: The Hidden Influence of the World's Most Powerful Consulting Firm 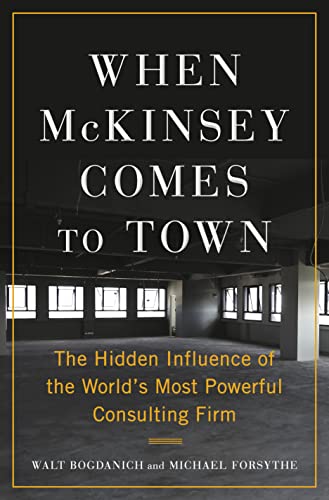 “A detailed and devastating portrait of a company whose influence reverberates throughout American society.”

Each year, some 200,000 of the nation’s brightest college graduates—many from Ivy League schools—apply for jobs with McKinsey & Company, a consulting firm that has advised most Fortune 500 corporations and more than 100 government agencies worldwide. About one to two percent are hired.

Like other top companies, McKinsey offers promises of riches and status. In addition, it lures smart, idealistic young graduates with the chance “to use their talents for a higher purpose, to make the world a better place,” write New York Times investigative reporters Bogdanich and Forsythe in When McKinsey Comes to Town, a blistering expose.

And what better way to begin a purposeful career than with a starting salary of $195,000?

Drawing on prodigious research, not only in scarce documents from the highly secret company, but also interviews with nearly 100 current and former McKinsey employees, all of whom had pledged never to discuss their work for clients, the authors reveal the underside of the self-proclaimed “values-driven organization.”

McKinsey may do things that come down on the right side of global warming and inequality (if so, they are not included here). Often, its best advice leads to cost-cutting, including layoffs and maintenance reductions, with sometimes disastrous outcomes.

As the authors show in story after story, McKinsey has advanced the goals of polluters, cigarette manufacturers, drug companies, Russian oligarchs, and others. Making millions itself in the process, the consulting firm, under the guise of “scientific management,” has enabled innumerable clients in their pursuit of corporate profits and greed.

Perhaps the most egregious example is its work for Purdue Pharma to increase sales of OxyContin at a time when thousands of Americans were dying from overdoses of the opioid.

In its marketing advice, McKinsey said Purdue and other drug companies were doing a poor job of analyzing prescription data. By targeting “physicians who are most likely to prescribe more of a given drug over time,” companies could “turbocharge” opioid sales.

“From 2004 to 2019, Purdue paid McKinsey $83.7 million in fees for marketing advice that made its billionaire owners even richer by stoking the nation’s appetite for the painkilling drug OxyContin,” write the authors.

Said Tom Peters, co-author of In Search of Excellence, and a former McKinsey consultant: “I am shocked [at McKinsey’s work for the opioid industry]. I am appalled and I am pissed off. How do you do that and then pretend you are a values-driven company?”

In its work with ICE (Immigration and Customs Enforcement), McKinsey helped advance the Trump administration’s policy of deporting undocumented immigrants, including the forcible separation of children from their parents at the border.

“McKinsey recommended that ICE spend less on food, medical care, and supervision of detainees,” say the authors. The revelation triggered a tremendous backlash among McKinsey consultants and alumni, including many who had joined the firm based on its supposed value of social betterment.

This was not the kind of “change that matters” that McKinsey promises job-seekers, write the authors.

Nor did it seem an act of social consciousness when McKinsey helped Disneyland avoid blame for the death of a youngster on a ride even as the amusement company worked to lay off expensive maintenance workers who could ensure the ride’s safe operation.

The book also offers insights into the vaunted consulting firm’s culture and operations, from its recruiting of new corporate and government clients at prestige events in Aspen and Davos, to its obsession with PowerPoint presentations and its internal lingo—consultants are not fired, they are “counseled to leave.”

A detailed and devastating portrait of a company whose influence reverberates throughout American society.