When the Killing's Done: A Novel 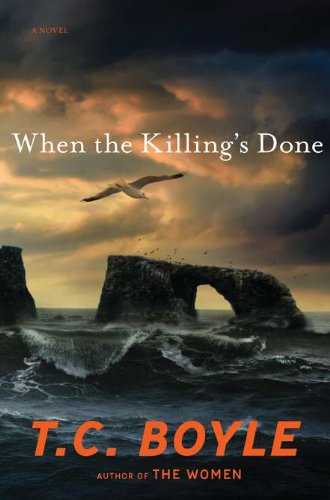 T. C. Boyle’s new novel opens with one of the most gripping chapters in contemporary fiction. A young married couple, recently reunited after World War II, are sailing their newly refurbished cabin cruiser, the Beverly B., in the Santa Barbara Channel. A storm comes up requiring them to fight for their lives. You know it won’t end well because the chapter is titled “The Wreck of the Beverly B.”

Beverly, the wife, eventually washes up on Anacapa, the easternmost of the Northern Channel Islands off the coast of Santa Barbara, CA. By the time she is rescued, she has had an awful time with rats. Fast-forward 60 years to Alma Boyd Takesue, National Park Service biologist and Beverly’s granddaughter.

Alma’s passion is saving the islands’ endangered native creatures from invasive species. Snakes, rats and feral pigs have been introduced to the islands over the past two centuries by both human accident and design. Having no predators there, they have proliferated and fed on defenseless birds as well as other small mammals to the point of near extinction.

Alma and her lover Tim are serious ecological workers too busy to sort out certain commitment issues. They suffer from crowded freeways and automobile exhaust, while attempting to eat a vegan diet. They drive a Prius and abhor the overpopulation and technology that threatens wild life and habitats. Alma’s orderly and tight-wound personality makes her a difficult person to like despite her admirable aims.

Ostensibly the villain of the novel, Dave LaJoy is a local successful business owner with dreadlocks and severe anger issues. His organization of animal rights volunteers, For the Protection of Animals, is adamantly opposed to the strategies spearheaded by Alma because they involve killing off hoards of rats and pigs. The FPA members demonstrate outside Alma’s building, while Dave LaJoy revels in disrupting Alma’s press conferences and conducting twisted eco-terrorism raids on the islands.

As the battle between these two uncompromising individuals wages on, we get a close personal look at one of the key dilemmas of modern life: Which groups or organizations should be given the responsibility of protecting the land, waters, and wildlife? What are the correct solutions to mankind’s unthinking, often greedy disturbances of ecological balance? And why the heck do some people get so emotional and dramatic about it all?

For a socially conscious tale, the pace is brutal. The wild beauty and allure of the Channel Islands erupts from the adventures and conflicts of gloriously complex characters whose tangled backgrounds are as perplexing as an island forest or a windstorm. Though the book offers no easy answers—and in fact mocks our human habits of attempting to control everything—When the Killing’s Done is also T. C. Boyle’s paean to the uncontrollable nature of all organic life forms.