When the Garden Was Eden 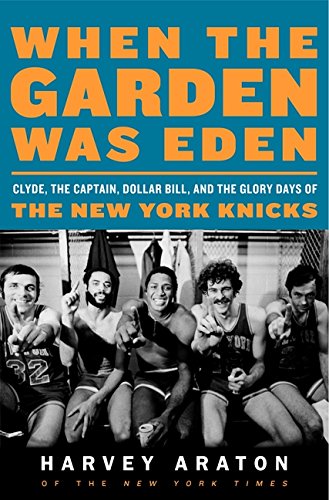 “Harvey Araton writes as if he is reliving his youth in the days when fans young and old lived and breathed New York Knicks basketball—the days when the garden was indeed Eden.”

New York Times columnist and author Harvey Araton first found the religion of New York Knickerbocker basketball as a teenager far removed from the seats he would one day occupy in his job at the start of his career as a beat writer for the New York Post, following the team.

Mr. Araton was a teenager during the years when the Knicks were emerging as the National Basketball Association’s team to beat, and he reveled in the upper reaches of Madison Square Garden rooting for the likes of Clyde (Walt Frazier), The Captain (Willis Reed), Dollar Bill (Bill Bradley) and the rest. The “rest”—including Dave DeBusschere, Earl “The Pearl” Monroe, Cazzie Russell, Dick Barnett and Phil Jackson—were a steady group of players that would become as well known as the first three mentioned because they melded together as important parts of a team void of supercilious egos that had one goal: to win.

The author blends his memories and editorial commentary with the rich stories gleaned from members of those glorious championship teams of the 1970s along with numerous well-known and longtime Knicks celebrity fans to bring the reader back in time. The Knicks of the late 1960s and early 1970s, though high-profile citizens of the “city that never sleeps,” are regaled for their independent spirit—a sure sign of the times—that also manifested into a team complete with stars, grinders, and role players. And everyone knew their roles.

When the Garden Was Eden is Mr. Araton’s ode to the players of that era who, unlike those in today’s NBA, played basketball with the idea that having one more point on the scoreboard at the end of the game was what mattered most.

The story is a must-read for basketball fans who predate cable television and are old enough to understand the historical context Harvey Araton writes about with such candor and clarity.

The fruit in this story is the Big Apple and the eclectic group of characters who lived their youth in front of millions of rabid fans and delivered the only NBA championships to date for the storied New York franchise.

And while it is tempting to try to judge different eras of basketball with the cynicism that might be borne of his 30+ plus years as a sportswriter, Mr. Araton doesn’t fall into this lazy approach. Harvey Araton writes as if he is reliving his youth in the days when fans young and old lived and breathed New York Knicks basketball—the days when the garden was indeed Eden.