When Evil Lived in Laurel: The "White Knights" and the Murder of Vernon Dahmer 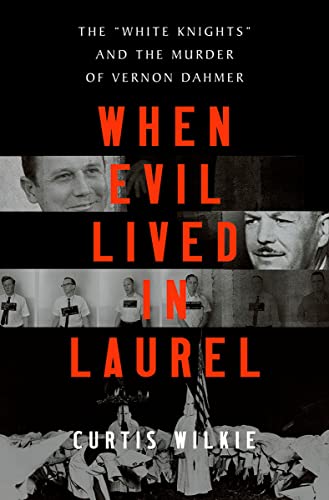 “It is more than a little disconcerting to read that each meeting of the White Knights, no matter how sparsely attended, opened with a Christian prayer before discussion turned to their decidedly un-Christian agenda.”

On the night of Sunday, January 9–10, 1966, two carloads of Ku Klux Klansmen from the White Knights sect in Laurel, Mississippi, murdered Black businessman Vernon Dahmer for a perceived sin that was unforgiveable in their eyes: “his tenacious efforts to register Blacks as voters and his defiance of threats by angry segregationists. . . .”

In acclaimed journalist Curtis Wilkie’s fascinating new book When Evil Lived in Laurel: The “White Knights” and the Murder of Vernon Dahmer, the author takes the reader inside the White Knights sect to document their rise and fall during the civil rights movement of the 1960s, a fall that came too late for their victims.

That nighttime raid on Dahmer’s home would be comical were it not so deadly. It included a Klansman in one car shooting up the other car, mistaking it for the police, and forcing it to be abandoned. And it was a borrowed car, at that.

Another Klansman, who had created his own “quick draw” holster, never had a chance to draw. To make matters worse for him, his pistol fell out of that holster at the Dahmer property, something that, like the abandoned car, provided clues to investigators.

Despite the clumsiness of the raid, Dahmer’s killers might have gotten away with it had it not been for the courage of Tom Landrum, a Klan infiltrator for the FBI. As it was, not all of the participants were punished and those that were evaded punishment for years before the law finally closed in.

The FBI had recruited Landrum, who worked in the Jones County, Mississippi, courthouse, to infiltrate the Klan and report on their activities, which Landrum did at great risk to himself and his family, particularly if his infidelity to the Klan should be discovered. After joining, Landrum was shocked to realize that membership in the group “included popular church deacons, respectable businessmen, and civic leaders.”

While Landrum feared repercussions from the Klan should his infidelity become known, he also worried about blowback from the larger society should he ever be outed as a member of the White Knights. He even requested a letter from FBI director J. Edgar Hoover to document his role as an FBI informant. Although his handler, agent Bob Lee, agreed to the request, FBI headquarters in Washington, DC, was unwilling to provide it.

Why? The author writes that “Lee was told that the bureau feared Landrum might write an unauthorized book about his experiences” and Director Hoover “wanted no wildcat books, no stories that did anything other than burnish his reputation and that of his empire.”

Landrum did, in fact, make detailed notes of his conversations and the goings-on at Klan rallies and meetings, and made copies for himself before turning the originals over to his FBI handlers. Sometimes the handoff occurred at the library of Mississippi Southern College in Hattiesburg because the “library was thought to be the last place a Klansman might show up.”

Hoover need not have worried about Landrum going rogue with a book, though, because Landrum kept his silence until long after Hoover’s death. Shortly before Landrum’s own death in 2019, he made those copies available to author Wilkie and sat for extensive interviews. So if the events of When Evil Lived in Laurel seem a little too real, it’s because it is based on a real-time accounting of the events.

Written with the gripping narrative of a thriller novel, When Evil Lived in Laurel makes readers feel as if they were actually there as the Klansmen plotted and carried out their reign of terror in Laurel and surrounding counties. Landrum’s reports offer insights into the world of hate, how it takes hold, how it spreads, and can lead to unthinkable acts by seemingly normal people, at least on the outside.

Wilkie posits that the White Knights and other sects were motivated as much by fear as hate: fear of seeing their place in society being replaced by the burgeoning Black community. To protect that place, they called on God and country as justification for their actions. It is more than a little disconcerting to read that each meeting of the White Knights, no matter how sparsely attended, opened with a Christian prayer before discussion turned to their decidedly un-Christian agenda.

White Knights leader Sam Bowers even claimed that “he had been called by the Lord to take up the work of preserving the purity of his blood and his land.” Wilkie reports that Bowers’ “theories would evolve into the ‘Christian militancy’ that became a tenet of the White Knights.” As Landrum wrote following a particularly small gathering of Klan members, “I feel ridiculous being in this group of four men with a Bible and a gun in a bitterweed infested pasture, talking about letting the Lord solve our problems.”

As much as a history and a true crime thriller, When Evil Lived in Laurel is a clarion call to learn from the past, including those episodes that most people would prefer stay hidden in the shadows. But “the demons of racism and anti-Semitism that [the Klan] worshipped were still alive a half century later.”

Noting that, in 2019, the Southern Poverty Law Center was tracking nearly 1,000 hate groups across the country and that long smoldering racial tensions have erupted anew, Wilkie writes, “Meanwhile the White House was occupied by a Twitter-obsessed leader whose remarks and frenzied rallies often resembled the language and political fire of George Wallace.”

When Evil Lived in Laurel, offers a first-hand look into the scary world of hate and provides valuable context for the discussion of it. It also gives us an example of how one man or woman who is determined to make a difference can actually make a difference.

Tom Landrum worked undercover for four years without pay, with only one regret. “He was concerned that his membership in the Klan might become an unwelcome legacy.” Because of that fear, he opened his documents to the author to make sure the record was unequivocal that he was involved with the Klan, not as a willing and blind follower of hate, but as someone trying to do good in a world of evil. As he told the author, “I’d like to think I helped a little.”