When an Elephant Falls in Love 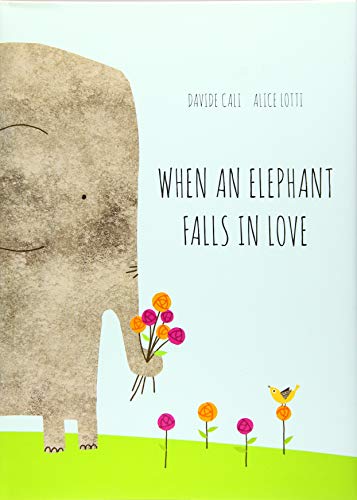 When an Elephant Falls in Love is an adorable story with a sneak peek into the heart of love’s first nibbles. It is sweet and simple, tender and relatable. Even the youngest of readers will identify with Elephant’s angst and rejoice at its victory: Love wins.

Elephant, our protagonist, is the epitome of bashful. Overtaken by a touch of love, he has no idea what to do. He does what anyone would in this condition. He responds with a bout of the crazies.

He balances on a tightrope wire while teetering an umbrella on his trunk. He flees behind a skinny tree, obviously way too big for this to be an effective hiding spot. He indulges in cheesecake; he can’t decide what to wear; he writes letters he will never send. And most courageous of all, he leaves flowers at her doorstep. Of course he is too shy to be seen and runs away after ringing the doorbell. Oh, Elephant pines, “If she only knew I existed!”

Then one day Elephant glimpses the yellow-bowed tail of the girl elephant he admires as she scampers away from his doorstep . . . after ringing the bell. Equally shy, equally smitten, she has left flowers for Elephant! Now that Elephant knows she feels the same, the two join trunks and loop their flowers together. They glow with a blush of happiness.

Wonderfully illustrated and smartly designed, When an Elephant Falls in Love is truly precious. Blocky, awkward Elephant is depicted showering in a club-footed tub. He is shown staring at a refrigerator full of healthy fruit—and cheesecake. He stands in front of a mirror attempting to augment his wardrobe with classy accessories. He even stretches out in the grassy hillside gazing at the drifting clouds in a dreamy daze. All the while his faithful friend, a little yellow bird, keeps him company. Each illustration is funny and clever with accompanying text sparse yet spot on and translated seamlessly.

First published in Italian, When an Elephant Falls in Love is the work of creative Italian duo Davide Cali and Alice Lotti. Cali is a veteran storyteller with dozens of books published in as many languages. He is an international children's book powerhouse who began publishing books in Italy in 1998. Only recently has he presented English originals with I Didn’t Do My Homework Because, published in the U.S. in 2014. While Cali has been collaborating with other designers and illustrators for decades, this is the first with Lotti, a visual designer also based in Italy.