When Death Becomes Life: Notes from a Transplant Surgeon 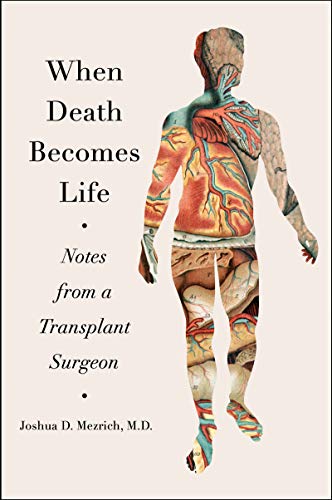 “Although When Death Becomes Life is about courage and innovation and dedication, it is foremost a book about hope.”

The most compelling histories of illness are those in which the author combines a deep, often personal understanding of a particular disease with a grudging respect for its power and genuine awe toward the scientists and physicians who seek to tame its savagery.

The past several decades have proven a golden age for such comprehensive volumes—part memoir, part quest—written both by patients including Andrew Solomon’s The Noonday Demon: An Atlas of Depression (2001) and by doctors such as Siddhartha Mukherjee’s The Emperor of All Maladies: A Biography of Cancer (2010).

In the latest of these panoramic volumes, When Death Becomes Life, noted transplant surgeon Joshua D. Mezrich approaches the development of his field as he does the care of each of his patients: with meticulous technique, the ability to draw and synthesize a staggering swath of complex knowledge, and an epic dose of humanity.

Although the formal organization of When Death Becomes Life begins with the history of transplantation and then shifts to stories of individual patient experiences, the effect is that readers are first introduced to the endeavor’s scientific hurdles and then to its ethical quandaries.

In narrating the history, Mezrich renders a century of technical innovations as gripping as any gumshoe potboiler by Raymond Chandler or Dashiell Hammett. Yet rather than merely a single mystery, the development of transplantation consists of multiple puzzles involving different organs and diverse scientific detectives—as though the casts of several Agatha Christie novels had crossed paths on the same page. Mezrich sews each of the strands of this history into a riveting organic whole.

The historical narrative begins with French surgeon Alexis Carrel who demonstrated how to stitch blood vessels together in 1902—making the insertion and removal of organs technically feasible—before pursuing research into positive eugenics that led to “a fascination with strongmen such as Mussolini and Hitler” and his ultimate disgrace.

We soon meet Dutch dialysis pioneer, Willem Kolff, who built his first machines in secret during the Nazi occupation of Holland using cellophane sausage skins, and Oxford University’s Peter Medawar, whose chance discussion with an animal breeding expert from New Zealand on how to distinguish “between fraternal and identical cattle twins” led to a seminal breakthrough in “acquired immunological tolerance.”

Yet the most fascinating characters in Mezrich’s history are the pioneering first-generation transplant surgeons who pushed ahead with their vision at a time when “most level-headed people had given up on organ transplantation as anything more than a crackpot idea that some crazy scientists were doing in a lab”: “analytic and religious” Joseph Murray of Boston’s Brigham Hospital who performed the first successful kidney transplant on identical twins in 1954; Minnesota’s Norman Shumway, known for eschewing “publicity and fame” after achieving the first successful heart transplant in the United States; brash and ambitious South African Christiaan Barnard, “much less of a natural surgeon, and much less comfortable in the OR,” whose sheer force of will enabled him to undertake the world’s first human heart transplant a month before Shumway—and to sleep with countless nurses during his years of intense preparation; and cancer survivor Walt Lillehei, who downed “numerous martinis every night” to help cope with the high mortality of early transplant surgeries.

“They never gave up,” writes Mezrich. “It would never have crossed their minds.” And the stakes were high: “The pioneers in transplant were willing to persist even with not only the very clear reality that their colleagues thought they were crazy, and outright killing people, but also the knowledge that they could end up in jail.” Until the emergence of novel immunosuppressant medications like cyclosporine in the 1980s, one-year survival rates often ran as low as 20 to 50 percent.

Mezrich saves his strongest admiration for Thomas Starzl, the father of modern transplantation and the audacious surgeon behind the first liver transplant, whom he finally meets in person in a “dilapidated building” which housed the offices of the nonagenarian surgeon at the University of Pittsburgh. Starzl professed later in life that, unlike many of his contemporaries, he “hated surgery” and “always feared he would screw up and kill the patients.”

In reflecting on Starzl’s persistence despite his seemingly relentless series of setbacks, Mezrich is able to bring to bear his own surgical insights. He writes, “it is easy to say that those patients would have died anyway, so it’s not a big deal. But I don’t buy that for a second.” Rather:

“Having had a patient die while in my hands; having had to walk out of the OR while everyone was standing in silence looking at me and the patient was lying there cold and lifeless, blood pouring out of the incision and onto the floor; having been the one to have to tell the family about their loved one’s death—I don’t see how it helps to know that the patient would have died anyway.”

Only a surgeon like Mezrich can lend emotional resonance to the incessant mortality that characterized the lives of these “driven beasts” who soldiered on in the face of constant loss.

To his credit, Mezrich approaches these pioneers with reverence, but also with a dispassionate eye. He is quick to call out conduct that strikes him as unseemly or even unethical.

In one notable section, he questions the decision by Richmond surgeons Dick Lower and David Hume to transplant the heart of an African American accident victim, Bruce Tucker, “without [his] family’s knowledge or consent.” Although the surgeons later won a civil lawsuit, Mezrich writes that “a great disservice was done to Bruce Tucker and his family” because “the donors (and their families) are our patients, too.” He describes these donors as “the heroes, the ones who make it all happen,” and how their buy-in is essential to the transplantation process.

In the second half of the volume, Mezrich gives voice to his own patients. Some of these accounts are harrowing, others inspiring. All are gripping. Nate, a medical student suffering from primary sclerosing cholangitis, asks Mezrich to perform his liver transplant, hoping to serve as his class’s graduation speaker in seven weeks. Gary, a retired high school teacher, has to return to the OR after Mezrich forgets to tie shut one end of a bile duct. Michaela meets the mother of the young car wreck victim whose death allows her to her live. And in what may be the most indelible moment among many memorable episodes, Mezrich nearly gives up on a patient, Tito, who appears to be dying on the operating table, but then miraculously pulls the man through after a transformative interaction with Tito’s daughter in the waiting room.

Into these patient narratives, Mezrich masterfully weaves many of the most unsettling ethical questions surrounding modern transplantation: Should alcoholics be eligible for scarce livers and under what circumstances? (Yes, says Mezrich, if there is a convincing commitment to sobriety; he notes that only approximately 20% of transplanted alcoholics relapse.) Should patients who play no role in causing their own hepatic demise, such as those with biliary diseases, be given preference in the allocation process? (Yes, argues Mezrich.) How much risk should living donors be permitted to endure to save family members? Can a relative meaningfully appreciate a risk of a mortality between 1 in 200 and 1 in 600 for a live liver donation?

While offering his educated opinions, Mezrich—like any good ethicist—raises more questions than answers. For instance, he pinpoints the paradox underlying the current hepatic allocation system: “When you are waiting for a liver, you want to be as healthy as possible going into this massive operation, but at the same time, you need to get sicker to get the liver, but not too sick that you get passed over when the time comes.” Yet he does not offer policy prescriptions for increasing organ availability, as one might expect, although he notes that xenotransplants from miniature pigs might someday fill the void.

A deep insight into psychological and social toll of serious illness pervades the work. Mezrich observes that, [s]ince I began taking care of sick people, I have noticed that one of the hardest things about getting sick, really sick, is that you are separated from the people you love. Even when families are dedicated to the patient, illness separates the well from the sick.”

The volume is also striking for its resounding eloquence, all the more remarkable for a physician writing a first book. In describing the aftermath of a heart procured following the tragic choking death of a child, Mezrich writes: “We hope Caleb’s heart is out there somewhere, still beating away, pumping blood around some boy or girl, giving him enough strength to run around a playground. Maybe someday LeAnn and Dan [Caleb’s parents] will get to listen to its rhythmic sound.”

Although When Death Becomes Life is about courage and innovation and dedication, it is foremost a book about hope. In his graduation speech, Mezrich’s patient, Nate, describes hope as “the most powerful currency we carry as patients.” This monumental and enthralling history of one of modern medicine’s most rousing triumphs is a definitive testament to that hope, and to the brave physicians and patients whose sacrifices made it possible.