When All Is Said: A Novel 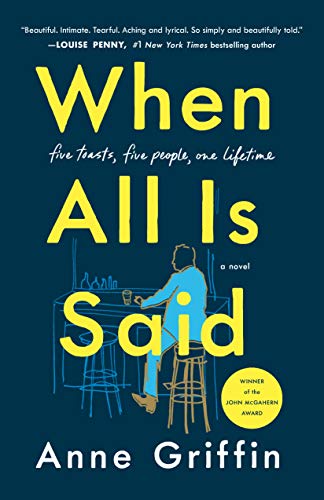 The first page of When All Is Said is an advertisement from a Thomas Dollard for an “Edward VIII Gold Sovereign Coin, 1936. Willing to pay top price.”

So begins the debut novel of an award-winning author, Anne Griffin. When All Is Said chronicles the life of Maurice Hannigan from a bar stool in a grand hotel, as the 84 year old raises a toast to the five most significant people in his life. Even as he is talking to the reader, Hannigan is really addressing his son, Kevin, who is the absent witness of the entire tale. Kevin lives across the ocean with his wife and Hannigan’s grandchildren Adam and Catriona. The tale reads like a solo theatrical show, with enough character to hold a live audience.

Before the first toast, Maurice whispers under his breath: “I’m here to remember—all that I have been and all that I will never be, again.”

Told in the present at the bar, and the past—which is vast for an 84 year old—the narrative is surrounded by the details of Hannigan’s final arrangements; he’s taken care of everything, sold or given away his possessions and his property, will spend the night in this hotel before moving onto a home where he’ll presumably spend the rest of his life. So we settle in the bar, and it all unfolds.

The story of Hannigan’s life is set up in his first toast to his older brother Tony. Tony is his beloved and loyal companion of his childhood who dies of tuberculosis at a young age, propelling Hannigan into adulthood on his own. Now with drink in hand, at his over-80 years’ vantage point, Hannigan weaves a story that starts with deep admiration and love for his brother and ultimately focuses in on a festering secret, an old intrigue that happened quite by accident when Hannigan was a child.

Back then, Hannigan and his mother were abused and bullied by their employer, Hugh Dollard and his son Thomas. When fate presented him a chance for revenge, Hannigan took it. Fate was possession of an Edward VIII Gold Sovereign Coin, accidentally dropped from Thomas’ fingers out of a window during an argument with his father. Revenge was Hannigan keeping the coin hidden from its rightful owner for the remainder of his life. Hannigan let the consequences of the loss of that coin warp his tormentor Thomas over the years. As the story unfolds, the reader discovers how.

The next toast to his stillborn daughter, Molly, allows the reader to experience Molly’s mother, the love of Hannigan’s life, Sadie. in all the scenes of anticipation there is ultimately devastation when the child dies. The writer lifts all this history out of “backstory doldrums”—with the colorful language of Hannigan and the ongoing thread of the missing coin woven into every toast as the lifetime consequences of the theft unravel. This tell-all format from “a slightly drunk old guy cornering the listener” can be predictable, but Griffin has twists up her sleeve in the plot to keep the reader going.

The courtship of Hannigan and Sadie is revealed in Hannigan’s toast to Noreen, Sadie’s sister. Noreen, who lives in an institution, is an innocent soul and accepts Hannigan with open arms into their family as he woos Sadie. Again the coin is introduced, and the intrigue moves ahead.

A toast to their son, Kevin, is next and we see Sadie again, mothering her small boy and more about the growth of Hannigan’s personal fortune, which is tied up in the history of the hotel he’s sitting in. Hannigan’s final toast is to Sadie, his wife, “the best ‘til last,” and here it sinks in how much he relied on her presence, how much he loved her, and how empty his life is without her.

But Hannigan proves to be an unreliable protagonist as he’s been hiding something from the first page. His final toast complete, Hannigan reveals his true motive. After all this telling, it’s no surprise.

Told with tenderness and empathy for all of us as humans who must face our own demise, or the loss of a loved one to age, When All Is Said is the voice of an old man, looking back a at a life shaped in equal parts by love and revenge.