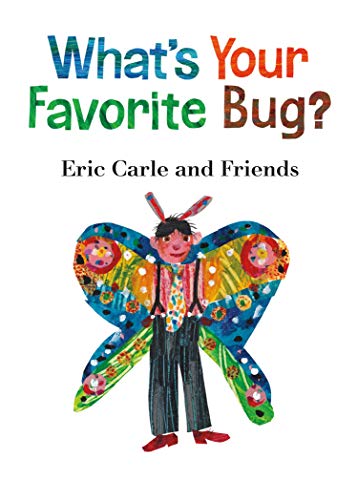 “What’s Your Favorite Bug? is a creative stand out, a little collection so full of personality that the reader will be tempted to look for the other titles in the series.”

Carle provides the opening with, what else, caterpillars (although he has every reason to pick ladybugs, spiders, fireflies, or even aphids). He admits that due to the success of The Very Hungry Caterpillar, that little bug has grown on him, but it was not always his favorite. It took being one of the bestselling picture books of all time with translations in 62 languages for him to appreciate caterpillars!

After Carle’s take on his favorite bug, 14 other illustrators fall in line. Denise Fleming, Beth Krommes, and Ekua Holmes are among the Caldecott rankings, while other illustrators have equally impressive artistic credits to their careers. But each artist has their own style and has submitted their bug from their unique perspectives.

Fleming loves the praying mantis. This critter hides so well and can look right at you with its forward-facing buggy-eyes. Her illustration places the mantis in a beautiful camouflaged collage with textures dominating, lines communicating movement, and a sparse positioning of lavender providing a perfect pop of lively color.

Krommes chose her bug, the dragonfly, for its symbolisms. It represents courage, strength, and happiness shimmering in the sunshine. Dragonflies are “Fierce hunters and fast fliers . . .” Her illustration shows a large dragonfly with graceful details on its wings, surrounded by sunflowers, sunshine, and some mosquito dinners. Fans of Krommes’ will recognize the cross-hatching wood-block artwork that earned her a Caldecott for The House in the Night (2008).

Holmes picked that worker of workers: ants. Far from being a nuisance bug, Holmes tells how, as a young girl, the only “pet” she could have in her apartment was an ant farm. She loved watching them for hours as they moved sand, dug paths, and tended their cocoons. Her illustration is something of a self-portrait peering into the see-through ant farm plexiglass.

Artwork dominates and each What's Your Favorite Bug? artist lets their personality shine through their choice of bug, their explanations, and their designs. Other bugs include Teagan White’s moths, Maggie Rudy’s katydids, Brendan Wenzel’s peacock spiders, and Eric Fan’s worker bee. The reader is treated to a snippet of bibliographical information as well as a snapshot from each illustrators’ childhood.

What is missing is a description of the artistic process, methods or materials each artist used to make their piece. So many are familiar with Carle’s paper making process that it is easy to assume that these other artists are using the same techniques when in fact they are all going about their work using something slightly different. What that something-slightly-different was would be nice to know.

Inviting participation from a variety of voices adds so much interest to this book. The youngsters will be forming opinions, agreeing, disagreeing, and answering for themselves what it is that constitutes their own favorite bug, and why. What’s Your Favorite Bug? is a creative stand out, a little collection so full of personality that the reader will be tempted to look for the other titles in the series.