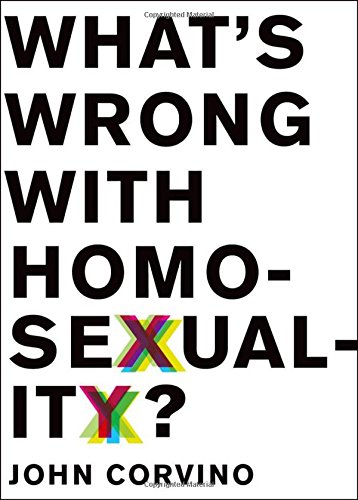 “Get past the title.”

That’s what I told a friend when I suggested she read this book. It is a provocative title and one that will put off many people—or entice others to pick up the book. The latter will be surprised, and possibly dismayed, by the book’s tone and content.

What’s Wrong with Homosexuality? does not condemn homosexuals or provide fodder for those who choose to demonize gay men and lesbians. Rather, it presents the author’s considered response to a variety of positions taken by people who oppose gay rights and LGBT people.

According to author Corvino, “[T]his book is the product of two decades of speaking, writing and debating about same-sex relationships. It grew out of a lecture.”

Mr. Corvino’s frequently debates same-sex marriage with Glenn Stanton. Stanton is the director for Family Formation Studies at Focus on the Family in Colorado Springs. He is also a research fellow at the Institute of Marriage and Family in Ottawa.

That said, it is difficult to reconcile the statements made by Stanton with the personal impact his positions have on LGBT people. Mr. Corvino mentions this in the first chapter, “Let’s not soft-peddle it: when Glenn opposes same-sex marriage, he is opposing us—me and Mark, and countless others like us. He wouldn’t put it that way, of course—another point on which we sharply disagree.”

Mr. Corvino addresses the religious arguments used to support anti-gay rhetoric. The standard go-to for the religious right is Sodom and Gomorrah. The author includes that scenario but, unlike the opposition, interprets the passage as reflecting the mob’s desire to rape the foreigner—the story has nothing to do with same-sex attraction. It has everything to do with inhospitality.

Therein lies one of the more interesting facets of this book. Mr. Corvino takes the usual points made by the religious right to condemn lesbians and gay men and provides an alternate interpretation by including the complete passage—not just the parts that support a misleading position.

The author spends considerable time dealing with morality. One of his more poignant statements is, “[T]here is something perverse about using moral arguments to inflict harm rather than to alleviate it—and sadly, the harm arguments are more often experienced as weapons than as points of insight.”

Mr. Corvino opines that morality deals with how we treat each other and “it is quintessentially a matter of public concern.” The “morality” issue comes up frequently in Mr. Corvino’s work. Each of us has an independent moral compass by which we navigate our lives. While people may agree on a “moral viewpoint” it is likely that how we arrive at that agreement varies.

The author addresses the “but, it’s unnatural” argument by discussing that what is unusual or unconventional is considered unnatural. Many people believe gay sex is unnatural because it can never result in procreation. That argument often raised by opponents of same-sex marriage. They believe the sole purpose of marriage is procreation. The fact that many heterosexuals marry without any intention to have children is dismissed.

And the fact there are no laws mandating procreation by married couples is also ignored. Many people deem the procreation argument specious. It just does not stand up to a reasonable debate. And, its proponents are hard pressed to defend it in a rational way—other than to say, “but that’s what it should be.”

This book provides many thought-provoking ideas and comments. What is moral? How do we define morality? Can I define it differently from you and we both be right? What is effect of one person’s comments on the life of another? Who is right? Is anyone wrong?

One shortcoming of the book is its concentration on gay sex--meaning sex involving gay men. There is little mention of lesbians. Perhaps he is uncomfortable talking about lesbians. Or, perhaps the restriction is more because women are normally left out of the conversation. This does get tiresome.

However, the arguments dealing with morality, religion and philosophy provide significant tools for lesbians and gay men to use when rebutting those that tout a religious based anti-gay rhetoric.

Yet perhaps someone will read this book and reconsider a position taken and staunchly defended. Maybe that will be someone who picked up the book thinking it was about one thing and discovering it is written from a different point of view.

If nothing else, this book is one that cannot be told by its cover—or its title.