What We Don't Talk About When We Talk About #MeToo: Essays on Sex, Authority and the Mess of Life 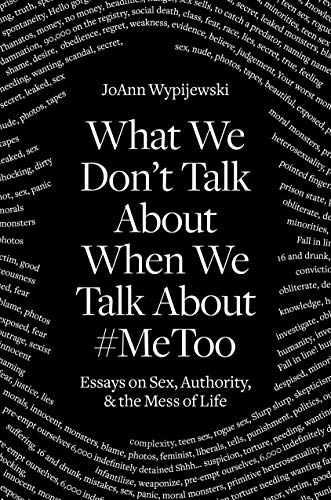 Over the last generation, sex has been mainstreamed into a multi-billion-dollar industry yet remains a war zone of fear and scandal. JoAnn Wypijewski captures the complexity of this social contradiction in her collection of a dozen-and-a-half revealing essays, What We Don’t Talk About When We Talk About #MeToo.

The case studies collected in this book were written between 1992 and 2018 and map out the nation’s contested terrain of sexual values. They reveal many of the lies, hierocracy, and just plain ignorance that are promoted by opportunistic media pundits and law enforcement officials.

Wypijewski’s radical perspective is grounded in a critical analysis that is no better revealed than her assessment of the Weinstein case and the #MeToo movement. As she insists, “Desperate situations demand desperate measures. After the terror of 9/11: war, torture, mass surveillance, the gulag. After the terror of Weinstein, to what ends must we go to feel safe?” She adds, “Rage, revenge, the frisson of command as the list of accused men grew—these emotions reigned as #MeToo burst into the air-conditioning system of the culture.”

She has no ideological or false feminist appreciation of #MeToo:

“Strip the veneer of liberation, and an enthusiasm for punishment is palpable. Look beyond declarations of revolution, and there is an under-analyzed conception of patriarchy. Take seriously the argument that any social conflict will have winners and losers, and there remain cavernous, unplumbed realities of loss.”

She then warns as to the consequence of the panic associated with the Weinstein case: “In the cauldron of panic, definitions collapse. . . . Rape, a terrible and serious crime, is conflated with behavior that may not be criminal at all—with the perverse effect that efforts to ensure fair criminal investigations and eliminate bias against people who report rape are undermined.”

In three separate pieces, Wypijewski brings a rigorous analysis to bear on the Catholic priest pedophilia scandal. “The priest scandal has raised a hysteria against which any rational line on youthful sexuality has about as much chance as that student facing the tank in Tiananmen Square,” she warns. “Even without that, nothing seems to make the blood boil like the suggestion that it’s possible for teenagers to emerge unscathed or even enriched from consensual sexual relations with adults.”

She applies her critical eye to the real cases involving two defrocked priests at the heart of the scandal, John Geoghan and Paul Shanley. She makes clear that deeper issues at play. Geoghan, along with others, was “(a) a priest [who] had molested children; (b) he had been found out; (c) rather than report him to police, his superiors reassigned him, often packing him off first to church-run therapy; [and] (d) the priest molested again.” Making matters worse, she reminds readers that “between January and June 1992, some 250 priests and three bishops nationwide would resign or be sacked. More than a dozen would be arrested. Three would be shot, two of them killed. Two would commit suicide.”

Wypijewski, however, looks beyond the media hype about sex and kids, and reminds readers of a more fundamental truth:

“rather than promise kids a world of good sex—like promising a world of happy marriages, monogamous fulfillment, self-sustaining nuclear families—maybe it’s more helpful to explain sex as the sea of clear water, giddy currents, riptides, sounding depths and rocky shoals that it is. You learn to navigate, find wonder in the journey, scrape yourself up, press on anyway and survive.”

She concludes on a utopian note as to the essence of sexual pleasure: “And sometimes, sometimes, you experience a bliss beyond expression.”

She applies the same critical perspective to the sensational saga involving the alleged sex scandal involving Woody Allen, his former partner, Mia Farrow and her daughter Dylan Farrow.  She carefully reviews the public record, especially the court transcripts, and notes:

“amid the shards of human experience on display, is a confrontation with malleable memory, with love and cruelty, with suffering as public spectacle, and our own tenuous attachment to something without which any of us would sink in an era hot for punishment: the benefit of the doubt.”

She recalls the cautionary note expressed by the presiding judge, Judge Elliott Wilk, “We will probably never know what occurred on August 4, 1992.”

Wypijewski eloquently warns: “There is a creepiness to the way so many who write about this case luxuriate in suffering, hang on every insinuation, wring from it the dirtiest conclusion. This too is the legacy of moral panic: in the guise of defending the child, children were sexualized. They could not be looked at naked, photographed in the bathtub, kissed all over, without raising alarms. Adults could be arrested for that, and have been, with the result that every child’s body, no longer innocent in delight, became a potential crime scene.”

Her reflections on the killing of Matthew Shepard, a gay student at the University of Wyoming, in Laramie, WY, in October 1998, evokes the same humanism.  She finds that he was “lured out of a bar by two ‘rednecks’ (‘trailer trash,’ ‘drop-outs,’ every similar tabloid term has been applied), kidnapped to a lonely spot outside of town, strung up like a scarecrow on a buck fence, bludgeoned beyond recognition and left to die without his shoes, his ring, his wallet or the $20 inside it.” Her study invokes Truman Capote’s 1966 classic tale, In Cold Blood, that was fully realized in Richard Brooks’ noir crime film.

Wypijewski’s complex analysis includes a detailed examination of the sex life in a small town and how AIDS took root among young people and people of color. She observes, “No one knows what goes on behind the doors in any town, just as no one knows what goes on between two people. But from what’s in plain sight, it’s hard to understand how anyone could consider Jamestown safe in the fullest sense of the word.”

Her essay on James Baldwin reveals not simply the complexity and humanity of Baldwin’s thought but that of Wypijewski’s as well. She reminds readers of perhaps Baldwin’s deepest truth:

“As a man-child when a thirty-eight-year-old Spanish-Irish racketeer fell in love with him. It was a dangerous love in 1940; it would be today. It made him feel beautiful for the first time, and, though not without anguish—a word that appears frequently in Baldwin’s explorations of human relations—this love shattered ‘all of the American categories of male and female, straight or not, black or white’ that work to define the totality of a person and so thwart self-definition. ‘I will be grateful to that man,’ he wrote, ‘until the day I die.’”

She concludes: “No American writer since DuBois dissected the problem of the color line with such intimate and ferocious grace. No other so persistently explored the price of our history and the price of love. And no other so embodied the convergence of liberationist energies that once and briefly spared the culture from utter rot.”

Wypijewski’s invaluable collection would have benefited from a brief overview of the role sex scandals play in the nation’s larger sex culture. Americans live their lives within a sex marketplace that includes everything from sex paraphernalia (e.g. toys, lubricants and costumes), pornography (i.e. online and other media) and “consensual” sex work as well as an increasing number of sex-enhancement medical procedures (e.g., Botox injections, breast augmentation and breast lifts) and sex-enhancement drugs (e.g. Viagra, Zytenz, and marijuana). The steady stream of sexual messaging inculcated by the media (e.g. films, TV) and fashion/cosmetics saturate daily life.

The only case study missing from this otherwise revealing and inspiring work is Wypijewski’s critique of Donald Trump, the living sex scandal who is the nation’s president.