What W. H. Auden Can Do for You (Writers on Writers) 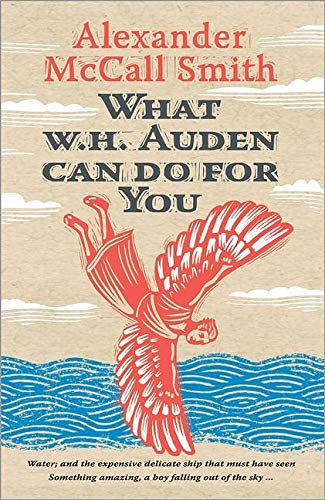 The title “poet of the century” may not have the same impact when applied to the 20th century that it did back in the 18th, but if there was a poet worthy of the honorific, it was W. H. Auden, whose life and work is celebrated in the latest in Princeton University Press’s Writers on Writers project, What W. H. Auden Can Do for You by Alexander McCall Smith.

Alexander McCall Smith is, of course, an author of some note who has enjoyed great success with his series of mysteries based on the casebook of the No. 1 Ladies’ Detective Agency in Botswana, Africa. And while the lady detective of the series, Precious Ramotswe, perhaps best displays Auden’s viewpoint of life (local focus, simple faith, gratitude), it is in another series that Mr. McCall Smith more clearly shows his fictional dedication to the poet.

In an Edinburgh-set series based on the adventures of literary lady Isabel Dalhousie, Auden is much quoted and clearly adored. So much so that his real-life literary executor Edward Mendelson has made a couple of appearances in individual mysteries.

So the links between Auden and Mr. McCall Smith were well documented even before the publication of What W. H. Auden Can Do for You. But if there is still any doubt in the reader’s mind, there is this:

“I have learned so much from this poet. I have been transported by his words. My life has been enriched by his language. I have stopped and thought, and thought, over so many of his lines. He can be with us in every part of our lives, showing us how rich life can be, and how precious. For that, I am more grateful to him than I can ever say.”

Which is high praise indeed. And yet no less than the man deserves.

Wystan Hugh Auden was a man who left his native England in a hurry. He rushed about, Iceland to Spain (where he intended to drive an ambulance in the Spanish Civil War—about as inappropriate a pairing of man and occupation as is possible) to Berlin. It was there that his close friend Christopher Isherwood opened his eyes to the vast possibilities for sexual hijinks that he himself would immortalize in The Berlin Stories, which became the musical Cabaret. He then moved on to Austria and Italy and Greece, and, most important, to these United States, where Auden would live for the majority of his creative years, wandering around New York City in carpet slippers and a stained old cardigan.

These travels became the weft and weave of his poetry, especially the poetry of his youth. And Mr. McCall Smith traces the trajectory, both of his travels and the resultant poems (“Spain,” “September 1, 1939,” the collection Letters from Iceland, “In Praise of Limestone,” etc.), in a pitch-perfect conversational tone. His purpose in writing this, you see, is not educational some much as it is something of a testimonial:

“This small book does not purport to be a work of criticism. It does not claim to shed new light on a body of work that has already been extensively examined. It is simply an attempt to share an enthusiasm with others who may not have yet discovered, or may not have given much thought to the work of, Wystan Hugh Auden, generally known as W. H. Auden . . .”

And Alexander McCall Smith, if nothing else, has a mad genius for sharing the things he loves. From Botswana to Edinburgh through the hardly-mysterious-at-all mysteries of his. His is a gift of charm, and of clarity of image—both of which he uses to the best of his ability here, in the creation of a book that is both the perfect jumping-on point for those coming late (forty-odd years after his death) to Auden and the perfect celebration for those who, like Mr. McCall Smith and this reader, have long revered and loved this odd little man and his teeth-rattlingly good poetry.

Early on, Mr. McCall Smith has a perfect Auden story to share:

“I saw Auden only once. It was in Edinburgh, a short time before his death, at a reading that he gave in the University Lecture Theatre in George Square. I was in my mid-twenties at the time, and I had just taken up my first academic post in Belfast. I was back in Edinburgh for a visit when I stumbled upon a notice announcing that W. H. Auden would read form his work at such-and-such a time on such-and-such a day. I got hold of a ticket and found a seat close to the front.

“The poet came in, flanked by members of the committee of the Scottish Society for the Speaking of Verse. The party mounted the stage and introductions were made. Then Auden stood up, and it became evident that the fly-buttons of his trousers were undone. There was an audible gasp from the audience, but Auden seemed unaware of anything untoward or, if he was aware of it, did not care. He began to recite his work, entirely from memory, including ‘The Fall or Rome’ and ‘Musee des Beaux Arts.’”

The picture conjured, the little, wrinkled man in oversize, wrinkled clothing, fly undone, his lunar face, “with its geological catastrophe of lines and crevasses” tipped forward to his audience, reciting “Musee des Beaux Arts” from memory, is quite perfect. As was Alexander McCall Smith’s decision to use individual poems as touchstones, as the baselines from which his chapters (“The Poet as Voyager,” “A Vision of Agape”) were drawn.

What W. H. Auden Can Do for You speaks to each of the poet’s major works with equal aplomb and gives each its proper niche in the man’s life, and, in doing so, presents a thumbnail for each of the Seven Ages of this man, from the Voyager to “the mature Auden, the Auden of settled views, the religious Auden; and finally the cantankerous and complaining Auden of late middle-age,” each lovingly wrought.

What quibbles there are are slight and small. “Musee des Beaux Arts,” the first Auden poem that this reader ever stumbled upon and one that opened doors in his mind that he had never suspected existed, although alluded to and used as the cover illustration, complete with a couplet of lines, is mentioned again and again, but never discussed.

Other works—“The Shield of Achilles,” Auden’s poems based on Shakespeare’s The Tempest, including the superb “Caliban to the Audience”—are never even mentioned. But this is Alexander McCall Smith’s recounting of what Auden has done for him and not my own memorial, so what the hell.

What W. H. Auden Can Do for You is a wonderful work, one that more than holds its own with the other authors canonized in Princeton’s series, Walt Whitman, Susan Sontag, and Arthur Conan Doyle.

And if it accomplishes what it sets out to do—to make the case that reading the poetry of W. H. Auden allows for the spontaneous combustion of the human intellect—then Alexander McCall Smith will have done something pretty great for us all as well.