What Sammy Knew: A Novel 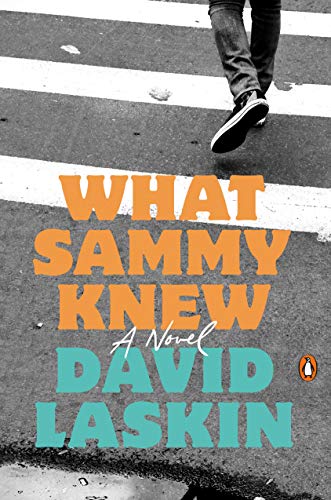 When a writer decides to base his novel’s plot around a middle-class Jewish kid’s coming of age adventure on Long Island in 1970, it’s not a promising sign. Our culture has embraced this tired tale too many times before.

It’s not a hopeful start, but somehow, thankfully, the rest of this novel manages to be just fresh and entertaining enough that it races to the finish line as a compelling read well worth your time.

Protagonist Sammy Stein is a whip-smart high school senior who attends the New Year’s Eve party of his dreams on January 31, 1969. That’s the night Sammy meets the lust of his life, Kim Goodman, a fellow senior but, as Sammy discovers, someone far more radical than his middle class sensibility can handle.

Within hours of meeting, Sammy and Kim fall into bed, she being far more experienced in nearly everything including sex. But somehow, they latch onto each other and find common ground in critiquing the bourgeois life of their parents, especially Sammy’s.

The writing here is breezy, and writer Laskin takes a few decent swings, as in this description Sammy has of his parents: “Their privilege was so new and shallow it threatened to come off in the rain like a bad dye job.”

Although Sammy’s parents certainly think of themselves as liberals with all the right politics, they have no problem telling their longtime African American housekeeper Tutu that she’s out of a job once Sammy heads off to Harvard.

Tutu is not happy, but knows she has little power and takes the news in stride. Sammy and his newfound friend Kim, do not. Kim, we soon discover, has the soul of a 1970s revolutionary, and, unlike Sammy, it’s not enough for her to merely read about the radical underground in Newsweek. She fancies herself the real thing although she can’t overcome a teenager’s naïveté.

Social niceties break down when Sammy invites Kim over to his house for dinner and Kim challenges Sammy’s father about his firing of Tutu while shoving her socialist ideology down his throat. Sammy’s father tells them to go live in Havana if they don’t like America.

Havana is too far but the couple instead heads toward the East Village where they know a gay guy named Richard who went to the same high school. And so the plot begins winding its way toward the climax. We’re treated to a nostalgic look at New York City at the dawn of the 1970s when radicalism was alive and taken seriously.

Sammy is angry at his parents and will only communicate with them through Tutu, which he believes may save her job. He may be living apart from his parents but he can’t tear himself away from his old high school. Sammy can hardly shake off his upbringing and continues attending senior year classes via the Long Island Railroad.

Kim, on the other hand, gives up high school and immerses herself in the Weather Underground while trying to ingratiate herself with the Black Panthers. She abandons Sammy, and he grows closer to Tutu, traveling up to Harlem to attend Baptist church services where he meets Tutu’s nephew Leon.

Leon wants to be a singer but can’t meet the right “Jewish” record producers. Richard takes advantage and uses Leon as the necessary black person Richard needs to sell a cache of Israeli-made Uzi machine guns to a contingent of Black Panthers.

Richard and his Israeli cousin Eli are just trying to make a quick buck. Kim is trying to win over the Black Panthers. Sammy is trying to win over Kim. It’s a mess with no one looking out for poor Leon. It certainly puts the lie to all the talk of racial justice. Somehow, they fail to protect the one black person they know.

All the plot points crash together nicely in the end as the characters speed toward a haywire caper doomed from the start. In the end, Sammy acquits himself even if it means disrupting his future, and author Laskin overcomes a hackneyed start to write a sweet novel that holds our interest to the last page.