What Noise Against the Cane (Yale Series of Younger Poets) 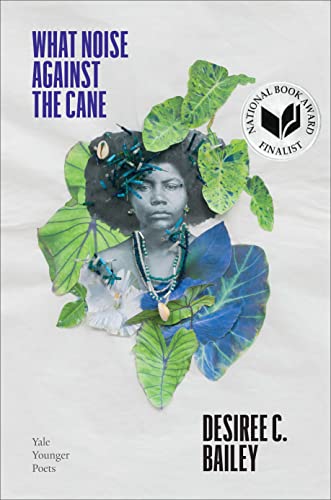 “Bailey can look forward to a great future as a poet.”

Since 1919, the Yale Series of Younger Poets has been granting an annual literary award through a competition “open to emerging poets (no age limit) who have not previously published a book of poetry and who reside (citizenship not required) in the United States.” Desiree C. Bailey, born in Trinidad and Tobago, raised in New York, won the 2020 award, and her book, What Noise Against the Cane, is published with a foreword by Carl Phillips, who judged the competition.

Bailey opens the book with “I am I.” I is a tricky self-reference. I is unbearable when I is the I of a colonialist, a supremacist, a maniac, a serial murderer. However, I is an emancipation proclamation when I is the I of the person who can finally breathe. Bailey uses poetry to expose “the whites’ two-tongue/talks of liberty  equality  fraternity”—the French Revolution’s slogan. [Extra spaces replacing commas and periods are used in many of Bailey’s poems.]

“Chant for the Water and Dirt and Blade,” the first and the longest poem that spans nearly half the book, is set during the 1791 Haitian revolution against French colonialism. Note that the Haitian revolution occurred during the French Revolution, considered paramount in Western civilization. The poem’s speaker is a single young woman, “a girl  an I unbroken and spotless  smooth as obsidian’s kiss.” In folklore, the natural black obsidian stone is a crystal of healing, also a blade to cut the ties with negativity.

The first poem captures complicated emotions of fear, rage, grief, discomforting memories, vengeful prayers against the French colonists who demanded reparations for each person that the 1791 revolt freed. The French cruelties linger in minds and hearts even though “I want memory to fail.” When the memory refuses to go away, supplications take over: “O water hemlock  sprout/from the grave mouth of my shell/your poisoned roots  seizing their eyes/and joints  blistering the organs.” Praying for the enemy’s bitter death is primordial, particularly amid a liberation revolution.

Moreover, the young woman in the first poem fights against the evolutionary urge to reproduce and leave a progeny. She imagines the Haitian children and the children of other Africans forcibly brought to “ruthless americas” “floating free/swimming the realms of possibility/unborn  unforced/unbroken  by the whip  unnamed/by coffee’s currency.” Repudiating the breeding instinct, she is willing to accept complete annihilation if “great gods” promise to give birth to “no sons or daughters/to stock the mills/no sons or daughters/pockmarked with price.”

If life is servitude, the poem argues, the utmost freedom dwells in being unborn.

The poem roves through seas and oceans. The Caribbean Sea binds the various islands scattered over hundreds of miles from Trinidad to Haiti and beyond: “our sea is not  can never be the wound.”

Mami Wata (Mother Water), “sea-spirit  goddess  mermaid,” unites Africa with the Caribbean, unbuttoning the distance and the chains: “when my sea-spirit enters/I am cast from my body’s tethers/I am no slave/I am the first language.”

As for the oceans, the poem’s speaker is willing to forgive the ocean that facilitated slave trade, brought warriors, missionaries, cruelties, torture: “ocean  O ocean/I forgive you  for not sinking/ the ship to a water-grave  stripping/it clean to bone.”

The first poem ends with a hopeful future: “I begin again . . . my body/making itself free   onward onward/toward a beginning  in one hand/ my machete  in the other the sea horn/ . . . blaring . . . my song.” Learning a lesson from the Haitian revolution, self-defense and self-expression vow to remain together.

Though not officially designated, the second half of the book contains 18 or so poems ranging in topics and formats. The poems experiment with ekphrasis, visuals, interdisciplinary visions. On some pages, the words are scattered to create a visual difference from a traditional layout.

Because immigration is a life-changing experience, no immigrant poet can preclude immigration encounters. Bailey, an immigrant, raises some core questions that most immigrants carry in their hearts and minds. “The jury is still out/on whether being just/ from one country is a luxury/or a limitation . . . a voice, an accent/drifts between the sounds/of two or more shores.” And then the encounters with condescension: “The new school wants to know if I can read cat, dog, hat. I think they think big words don’t exist on islands.”

The people of African descent living in America carry a crushing burden, a series of direct and vicarious racist traumas, whether they are newly arrived immigrants or came here eons ago in the slave ships. “It’s Risky to Love in the Season of Hunters” captures the dynamics of living an everyday life while hunters converge their guns to obliterate you out of existence. Black kids (such as Travyon Martin) strolling inside the gated communities are presumptively criminals, never lovers. “When the dark tightens/around my neck I think . . . my lover/will cross a hunter’s eye . . . to be gunned down.”

Even emerging poets, publishing their first book, are rarely unidimensional. Poets live in overlapping galaxies. Bailey does not write only distressing or rageful poetry. Many readers will enjoy “Flowers Pressed to My Head” as a love poem, a poem of ecstasy bordering Sufism. “The mirror is not a home . . . The mirror is not a home without you.” Here, the poem’s speaker drops the I, the self, as an inadequate shelter. “There is I and I, which is you too. You and I intertwined . . . I’d like to stitch myself to the divine . . . Which is to say I am floating on the light.” Here, the readers familiar with Rumi’s poetry will understand perfectly well what Bailey is saying.

The book ends with a second take on the opening poem, “Chant for the Waters and Dirt and Blade.” Now there is no revolution taking place except inside the ever-restless mind. Like before, the anxiety is intense but not catastrophic. All immigrants know the feeling of going back to the first home, located across the seas, sometimes in the seas. “Where will we live I ask my ocean-torn love where/will we raise our children . . . we/of many soils  we who know the curse is the blessing/ is the curse   we of many and no homes.”

Bailey can look forward to a great future as a poet. The drawings are showing that the building would be spectacular. The Yale Younger Poets series is finding gems, and removing the age and citizenship requirements for the competition must be lauded. The series may in the future waive the residency requirement and nurture a more robust international competition in English poetry.