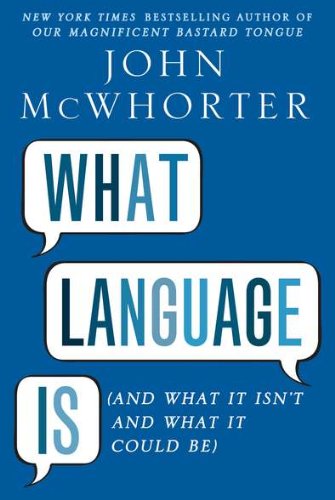 “If there is something [John McWhorter] doesn’t do well, we won’t find it in his new work, What Language Is . . . And speaking of prose style, this book is an example of the sort of writing everyone should aspire to. . . . While language is ubiquitous, written ones are a minority. This book is a reason to consider ourselves fabulously fortunate.”

Author, scholar, teacher, popular media personality, and linguist James McWhorter is so prolific and good at everything, his talents behoove either admiration or jealous resentment. He has written over a dozen books on language, both for general and academic audiences. If you have not taken one of his classes at Cornell, Berkeley, or Columbia (where he currently teaches—disclosure: so do I, and I hope to meet him one day), you may have read his column in the New York Sun, or seen him on PBS or the Penn & Teller show, or heard him on NPR or The Teaching Company.

If there is something he doesn’t do well, we won’t find it in his new work, What Language Is: And What It Isn’t and What It Could Be. Like the rest of his work, this is a fascinating and extremely well crafted overview of the nature of languages and how they change. It presents his overview and explanation of languages, and argues for reconsideration of how we view Black English, rules of grammar, and the role of writing down what we say.

Native speakers of English often find it difficult to learn foreign tongues, and we tend to be fairly snobby and inflexible about how we view versions of English that are different from what we learned growing up. Indeed, “native” and “growing up” are the keys to understanding both linguistics and relatively straightforward languages like English. As children we learn intuitively the rules and nuances of our mother tongue. As with culture, self-awareness comes when we travel abroad and learn new forms of communication.

Dr. McWhorter begins with the useful analogy of observing marine life. Were you to look at a book from the early 19th century with drawings of life under water, the perspective would be from the beach. Diving technology was only available to Europeans after 1840 (in pursuit of a good analogy, he glosses over Aristotle’s description of a diving bell in the fifth century BCE), and even after the invention of diving the water was murky and depth was limited. So our view of marine life was from the perspective of people who do not venture under water.

As non-specialists, our understanding of languages is like seeing jellyfish spread out on coastal rocks, and even for linguists, it is like peering through murky shallow water. There are probably more than 6,000 languages in the world today, and very few of them are written. One of the most pervasive, English, lacks the inflected endings and other complications that languages commonly use to impart meaning.

When, for example, we study German we struggle to understand seemingly arbitrary rules that seem designed to enable native speakers to enjoy schadenfreude at the expense of adult learners. (A certain person comes to mind, who decided to enroll in first year German while on sabbatical at Harvard, and found himself embarrassed by the language acquisition skills of young crimson-snot-nosed freshmen).

A great number of children in the world speak languages that are even more complicated than German. English, unusual because it has dropped gendered nouns and inflected case endings, may have been simplified by invading Vikings, whose broken rendition of the local spoken language remained a part of our grammar.

After you try to read Chaucer or even Shakespeare you can easily surmise that English has changed dramatically over a relatively short time. We codify what people speak today in grammar texts and dictionaries, and then turn up our noses at anyone who speaks differently. As author McWhorter points out, Black English is normally considered an ungrammatical slang—the product of a social status that precluded education. In fact, Black English is a grammatically consistent dialect. It is what a linguist should expect when adult slaves, all of whom spoke different languages, were forced to speak with each other using newly-learned English vocabulary.

Much the same process happened in the historical transition from Middle to modern Persian, and with many other languages cited by Dr. McWhorter. “Standard” American English is the only version taught in schools, and everyone is expected to speak it. When a subjugated group develops its own dialect, it is an extension of American politics and culture that we view the dialect as substandard.

Just as English grammar is a stripped down version compared to its Germanic ancestor, Black English dispenses with many verb conjugations and possessive endings, and this usage dates back to the 1790s. No American will fail to understand the meaning of “this one fine book.” Black English conveys meaning just as well as the standard dialect—and perhaps it is even a bit more efficient in doing so.

Author McWhorter compares the way that adults developed and propagated Black English with the recent progression of modern Hebrew from biblical Hebrew. Modern Hebrew was a language adopted by adults who spoke other mother tongues, and it has different verb conjugations from what one finds in the bible.

But here I must disagree with his claim that modern Hebrew is a much simpler form of the biblical language. True, the conjugations are different, but they are not fewer or less complex in the seven basic verb forms of trilIteral roots. Possessive constructs come naturally to a modern speaker, and what case inflections existed in ancient times are still required to make a proper sentence.

Indeed, Hebrew was already a fairly simplistic version of Western Semitic 2,500 years ago. It does not have the dizzying case endings of Classical Arabic, and in keeping with Dr. McWhorter’s argument, the grammar of colloquial Egyptian Arabic is closer to Hebrew than to Classical Arabic. This is not to diminish his argument about Black English; but rather to suggest that the analogy of Hebrew is inapposite.

Just as anthropologists often have difficulty defining the boundaries of cultures and subcultures in an increasingly interconnected world, linguists (who can trace much of their ancestry to the field of anthropology) argue over terms such as languages, tongues, dialects, idioms, pidgins, and creoles. The author’s view of language is that it is IDIOM, which is to say that it is Ingrown, Disheveled, Intricate, Oral, and Mixed. When we understand the wonderful diversity of how people speak to each other in languages learned from birth, we have a clear aquarium view of the ecological intricacy of linguistics.

From this vantage point with a less murky view, we should adjust our perspective on what constitutes a “real” language, which ones are more or less “sophisticated,” and how fast we must stick to codifications of grammar. What harm is there in recognizing that our language evolves as people change the way they speak to each other? He writes: “In so many ways, we celebrate hybridity, diversity, ‘synergy,’ and, more particularly, democracy and attending to multiple voices.” It would be a natural outgrowth of these values to recognize “the demotic in our formal prose style.”

This is a difficult lesson to digest, especially for the grandchild of a Brooklyn high-school English teacher. I stubbornly boycott grocery store express lanes unless they take the trouble to say (however many) items “or fewer,” not “or less.” (You can go ahead of me if you have fewer containers of milk than me, but your quart won’t put you ahead of my half gallon). Dr. McWhorter’s advice is, in so many words, to lighten up. Stop worrying about ending sentences with prepositions. He would allow us to boldy split infinitives.

And speaking of prose style, this book is an example of the sort of writing everyone should aspire to. Not only does Dr. McWhorter seem to have an extraordinary talent for picking up complicated languages, but he also uses his native English artfully and gracefully in speech and in writing. While language is ubiquitous, written ones are a minority. This book is a reason to consider ourselves fabulously fortunate.