What He Did in Solitary: Poems 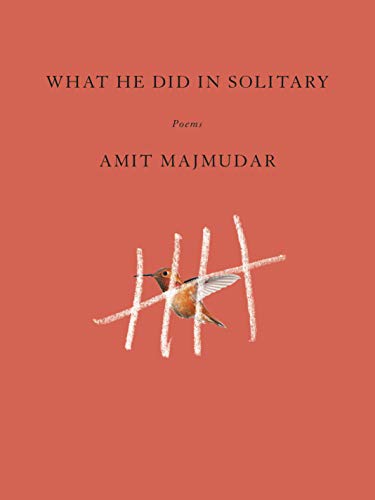 Amit Majmudar, the first poet laureate of Ohio, brings a lot to the table: South Asian heritage, Hindu spirituality, immigration awareness, novel-writing praxis, and physician’s knowledge of radiology. All this mirrors in What He Did in Solitary: Poems. Amit (a name he inserts in several poems following the Urdu/Persian poetic traditions) composes cross-cultural multidimensionality in his effusive imagination.

The titles of the poems spill the secret that we are reading physician poetry. The title tags such as “invasive,” “bloodline,” “neurology,” “syndrome,” “pediatric cardiothoracic surgery,” “virus,” “neuroastrogenesis,” and “replacement fertility (titled twice)” construct an imposing medical pathos. Inside the poems, lines call to attention “capsule narratives,” “zigzag ECG,” “Doorknob-slobber droplet,” and pain that “Vanishes suspiciously within seconds of swallowing baby aspirin.” Perhaps by chance, “The synapse where your pain was crossing widens.”

Only an ingenious physician can perceive poetry in X-ray machines, pills, viruses, and capsules. Amit does it daringly.

Amit also brings his novel-writing aptitudes to his poems, weakening the borders between prose and poetry. Many poems are loquacious, as might be chatty characters in tedious novels, piling words on words, hiding emotions, even meaning, in exuberant verbosity. “Worthy Oriental Gentleman, he said, was really just a back formation from/the word, obviously tongue-in-cheek—the real origin was polliwog, that is,/ tadpole, that is , they were calling our forefathers armless legless helpless slips/atwhich (sic) in a swarthy Oriental backwater, but . . .”

Paragraph-type prosy poems are turning into a popular genre of poetry. Yet the readers may totter while looking for rhyme, meter, music, or poetry.

Several poems integrate Amit’s Indian heritage. He reminds Cleveland, “City where the dying/come to stay” that “My dad was one of your diligent/Indian physicians.” Musing on “Invasive Species,” a beautiful poem referring to the indigenization of foreigners and asserting that “Everything is alien,” Amit points out that “Everybody thinks the Mughals/Indian, but Mughal comes from Mongol,/Invaders make themselves at home and home/remakes them into natives.” No homage to Hindu India is complete without drawing attention to its sacred rivers, “That Ganges with the lights along it, holy/cities feeding off it like electric/mosquitoes plugged in the mother aorta.” But then India has been Muslim for over a thousand years.

Amit demonstrates a complicated relationship with Islam and Muslims. Though sympathizing with bearded Ahmad Rahami, “my doppelganger Afghan, / mon semblable, I will not say mon frere,” the poem draws a vivid distinction between resemblance and brotherhood. You look like me, but you are not my brother is an ominous slogan that the exclusionists chant in Modi’s India, Trump’s America. However, no such meaning can be attributed to Amit’s poetry. Possessing a generous spirit, Amit is unlikely to scapegoat Muslims for the wounds that history has inflicted on India or Hindus. “I, a Hindu, make this song/to show my own, to own those wounds.” Amit does not play the blame game.

Calling upon Rumi and Hafiz, the great Persian masters of verse, some poems in Solitary seem to have absorbed strands of Sufism. Rumi and Hafiz evoke intoxication as a metaphor to express the love of God. “His rhymes, when broadcasted by the muezzin, / A rain of red wine out of the blue, Hafiz/ . . . Making Marines cry Allah. Mobs cry Oorah, /Lovers who never knew they knew Hafiz.” “You’re always asking us the way to Mecca. / Kafir, maybe it’s time you went yourself.” “I said the Ninety-Nine Names/And then, somehow, the rhymes came.” This is delectable poetry in the realm of Sufism.

As a child of immigrants, Amit is aware of unremitting racism that nonwhites and even some whites face in America. “I showed up scruffy the next day, and they called me terrorist.” A Sikh or Hindu donning a beard takes the risk of being associated with the Taliban. With a beard much like that of “Ahmad, Amit, Rahimi, him me” “I am alone here now, / among Americans a foreigner/when just last year I used to be/among Americans American.” Social prejudice cuts through boundaries in search for a broader category of scapegoats, mixing and matching ethnicities without knowledge. And yet, “Strange, how in my nonwhite heart/ Faith in the Western World defends its last redoubt.”

The most innovative poems experiment with the spectacle of reincarnation. “Everything is past.” Amit explores the idea of writing letters to a future-self: “Hello again from who you were/Before.” The Hindu concept of samsara (cycle of reincarnation) makes no promises that a human would be reincarnated only as a human. Reincarnation considers karma in determining the future-self. “When I was younger, kid, /I spiked the karmic punch, /And now what’s in me/Is bound to be in you.”

In the complicated calculus of evolution and regression, reincarnation promotes and demotes the status of beings. Regardless of karma, Darwinian evolution turns monkeys into humans, but Hindu samsara can downgrade humans with bad karma into reptiles or other lowly creatures. Linearity is the optimistic imagination of the simple-minded. The poet knows both the science and theology. All the pasts are “Nested, life in life in life.”

The lovers of poetry will appreciate that publishers are sponsoring international poetry, promoting poets with diverse racial, religious, ethnic, and linguistic backgrounds. Poets like Amit are building pathways across cultures and nations to explore and share universal feelings, anxieties, and other predicaments. While solitary, people across the world do the same funny things: “Did a hundred squats/ . . . “shouted at the ceiling/” . . . “Sobbed/” . . . “Ate.”

Good poetry offers memorable lines that enthrall the readers’ hearts. Here are a few from Solitary: “It’s spring in the labyrinth, but we waste it looking for a thread out.” “I know the name of your God. Can you name mine?” . . . “I want a white name, / But not too white,” . . . “a dozen whitecoats clustered bedside” . . . “Love is a circle that ends when it ends.”