What Happened to Paula: On the Death of an American Girl 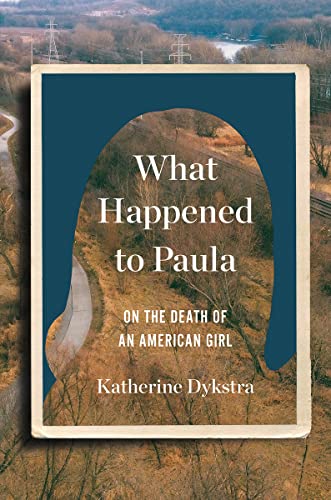 One picks up What Happened to Paula? On the Death of an American Girl, expecting a true crime murder mystery. On the surface, it checks all the boxes. Eighteen-year-old Paula Oberbroeckling leaves her home in Cedar Rapids, Iowa, in the middle of the night and never returns. When last seen, she was barefoot and wearing a dress so flimsy it was referred to as a nightgown by the police.

Paula’s body is found four months later in a culvert with her wrists and ankles bound. No one was ever arrested and her death, in July 1970, remains an unsolved cold case 50 years later.

Author Katherine Dykstra married into this case. Her mother in law Susan, who grew up in Cedar Rapids, is the instigator, having started a documentary film project that never quite gets off the ground. Although Dykstra is initially repelled by the brutality of Paula’s case, she eventually signs on to help her mother in law with research and, before long, she finds herself going down the rabbit hole of “what ifs.” Coming out the other side, Dykstra has produced an extraordinary book that is nothing like your typical true crime saga.

Using Paula’s death as a jumping off point, Dykstra has written a sociological study of how society mistreats women and how many of us—even mothers—teach girls and young women to turn the other cheek and be quiet when faced with perverts, creeps, and killers. That acquiescence and learned experience allows violent men to turn females into throwaway toys, not occasionally but often.

This book is a damning examination of how vulnerable women are in our society, and it’s a topic that is hiding in plain sight. “In 2017 alone, 3,222 women were murdered in the United States. Here is one giant gaping wound that, never triaged, is festering just beneath the surface of American society.

“There is rarely physical equality between men and women,” Dykstra writes. “In this way a woman would nearly always be at a disadvantage.”

It’s jarring to hear a feminist writer admit in print that women are the weaker sex physically but just as jarring are the statistics Dykstra quotes. She notes how often all of us read about dead and missing women, but rarely does anyone stop to connect the dots: “In recent memory I can recall the stories of women whose bodies had been tossed into fields, into bodies of water, buried under leaves in the forest, run over by cars, chopped up, put in trash cans, stuffed into suitcases and left at the side of the road.”

Dykstra begins her journey in a very different place. Naively perhaps, she expects to unearth enough evidence to avenge Paula’s death by finding her killer. She does what any true crime reporter would do: retracing Paula’s steps on the fateful night when she leaves her house in a flimsy dress never to appear again.

Dykstra pores over police reports and attempts to talk to relatives who refuse to talk to her. Dykstra gets almost nowhere with her first-person reporting, but what saves her are the earlier interviews done by her mother-in-law.

Dykstra’s journey into Paula’s last days seems to shift when she learns the young woman may have bled to death—her body dumped—after getting a botched abortion.

As she writes: “It dawned on me that what I wanted to say about her death was less true crime and more sociological study. Meaning, though a girl had been killed, and though the details of her disappearance and death are important . . . this is not a book about a murderer.

As the details of Paula’s case pile up, Dykstra realizes to her horror that, despite Paula’s horrible end, society might not see her as a sympathetic enough victim. Even Dykstra’s own husband is not so sure he “likes” Paula because, in the days before her death, she was playing one boyfriend off against another. When Paula rushed out of her home that night, she alternately was dating an African American and a local blue-collar boy. It seems likely the African American boy was the father, a societal taboo at the time.

Among other things, Paula’s story puts the spotlight on how much has changed in society since 1970. When the police tell Paula’s mother they’ve reached a dead end, she tries to enlist the local media, but a man who later became the newspaper’s publisher tells her, “There’s no interest.” Compare that to today’s wall-to-wall media coverage whenever a blonde and beautiful Caucasian girl goes missing. Chances are, the name Paula Oberbroeckling, as hard as it might be to pronounce, today would be on everyone’s lips.

What Happened to Paula? is a powerful book and a touching one. Dykstra learns she is pregnant with a daughter in the middle of her research and finds herself wondering what the future will hold for her baby girl. She writes: “Figuring how to move forward with the knowledge that we send our daughters into a world tilted against them, reconciling our own roles in making this so, and keeping our eyes open to the dangers that lurk as well as to the many wonders and opportunities—these would be my challenges now.”