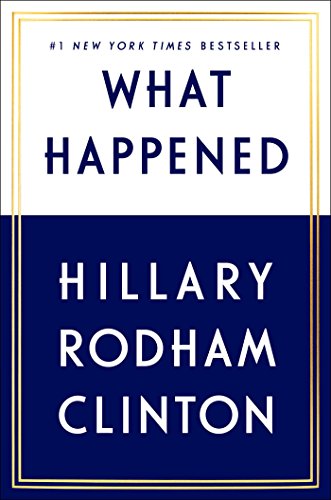 “I never liked her. She’s too pompous,” said a middle-aged woman.

With comments like that, it can be a challenge to review a book written by (perhaps) the most vilified woman in modern public life. Not since Eleanor Roosevelt has any woman evoked such a vituperative reaction in so many people. Pundits demand that she “stop talking.”

Hillary Rodham Clinton, the singular most qualified person to ever run for president, lost the 2016 election despite winning the popular vote by 2,864,974 votes.

Hillary’s book, What Happened, published less than a year after her unforeseen defeat by Donald Trump, is a personal and comprehensive reflection on the 2016 election. The title alone is enticing because it is a clear, concise statement that is poignant in its simplicity.

Countless others, no doubt, will parse and parry for years to come over what happened and why. This book, however, provides a unique insight into the 2016 election.

One theme runs through the book. Hillary—and everyone around her—thought she would win. The fact that she won the popular vote, but lost due to the Electoral College is galling.

What Happened takes the reader from Hillary’s decision to run, through the primary and the general election campaign, and into the aftermath. It’s a view from the ground up, and everything is laid out. Not everyone will agree with her analysis—and that is unimportant. What remains is a detailed account of what happened . . . to her and to the country. It’s her book and her perspective. And she gives it the gravitas it deserves. At times, intensely personal, at others, extremely wonky, the book is pure Hillary.

Hillary’s critics clamor for her to stop talking. But why should she? The same demands never occur when a man is involved. Yet Hillary persists and she has a lot to say. Besides, Hillary follows Eleanor Roosevelt’s advice, “Do what you feel in your heart to be right—for you’ll be criticized anyway. You’ll be ‘damned if you do and damned if you don’t.’”

There is a sense of freedom in this book. It is grounded in the fact that Hillary Rodham Clinton will never again run for public office. There is no further need to cater to the vacillating whims, demands, and expectations of the electorate, donors, or the media. Losing the 2016 election gives Hillary the opportunity to opine, dream, comment on, and predict.

“I’ve tried to give an honest accounting of when I got it wrong, where I fell short, and what I wish I could go back and do differently. This isn’t easy or fun. My mistakes burn me up inside. But as one of my favorite poets, Mary Oliver, says, while our mistakes make us want to cry, the world doesn’t need more of that.”

She freely admits that many people just do not like her. And she admits that hurts. This is a personal book giving readers a rare glimpse into the world of one of the most buttoned-up women in the public eye. By turn, funny, sarcastic, sad, angry, insightful, thoughtful and prophetic, the book takes reader is taken on a tour of the soul-searching Hillary engaged in after her defeat.

Why did she run? She realized she could lose. Her husband, former President Bill Clinton, reminded her that she might lose. That had already happened once. But she persisted.

“I ran for President because I thought I’d be good at the job. I thought that of all the people who might run, I had the most relevant experience, meaningful accomplishments, and ambitions but achievable proposals, as well as the temperament to get things done in Washington . . . I was as prepared as anyone could be. I had ideas that would make our country stronger and life better for millions of Americans . . . In short, I thought I’d be a damn good President.”

The chapter “Get Caught Trying” presents one of the best “fly-on-the-wall” experiences. This happens throughout the book, and it’s attributable to Hillary’s writing style, which is not wonky at all. This chapter is about sausage-making nature of a campaign, and it is not pretty.

There is the “caricature of me as a power-hungry woman” that Hillary acknowledges was a factor she considered. Considering that no man is every accused of being “power-hungry” or criticized for being ambitious when seeking political office, these accusations carry the stench of misogyny that Hillary faced. If nothing else, the 2016 election confirmed what all women instinctually understand: They are held to a different, and higher, standard than men.

Hillary is no neophyte in the political arena. She knew the challenges that lay before her, “Political campaigns are massive enterprises with thousands of people working together toward a common goal, but in the end, it’s intensely personal, even lonely. It’s just your name on the ballot. You’re embraced or repudiated all by yourself.”

The section entitled “Frustration” is particularly interesting. Reviewing various occurrences during the campaign, with the benefit of time and distance, reminds readers that she was held to a much higher standard than her opponent. The “Commander in Chief Forum” in September 2016 is a case in point. Matt Lauer cut Hillary short on answers after spending most of the allotted time asking about emails. He then lobbed softball questions to Trump and treated him with kid gloves.

Still she persisted. As the only qualified person running for president, it is ironic that she was criticized for being too prepared.

Hillary’s analysis of Russia’s interference with the election is both thought-provoking and concerning. Hillary talks about Putin, “It’s all about projecting an image of traditional masculinity, Christian morality, and white nationalist purity and power.” She also mentions how Putin responds to her, “Putin was trying to help his preferred candidate. After all, he disliked and feared me, and had an ally in Trump.”

Along those lines, she talks about Trump’s bromance with Putin. “Trump doesn’t think in terms of morality or human rights, he thinks only in terms of power and dominance. Might makes right. Putin thinks the same way, albeit much more strategically. And Trump appears to have fallen hard for Putin’s macho ‘bare-chested autocrat’ act. He doesn’t just like Putin—He seems to want to be like Putin, a white authoritative leader who could put down dissenters, repress minorities, disenfranchise voters, weaken the press, and amass untold billions for himself. He dreams of Moscow on the Potomac.”

There is no doubt that Hillary has been paying attention to the developments on the domestic and world stage. “America’s lost prestige and newfound isolation were embodied in the sad image of the other leaders of Western democracies strolling together down a lovely Italian street while Trump followed in a golf card, all by himself.”

Hillary spares no sympathy for the media’s refusal to take the prospect of Russian interference seriously. According to her, most journalists thought the argument that Moscow was trying to help Trump was “outlandish and borderline absurd.” They thought the attempt to raise the alarm “was just too aggressive, self-serving, and a little far-fetched.” (How are you feeling about it now, boys?)

Mike Morell, the former Acting Director of the CIA said, “. . . we would say the Mr. Putin had recruited Mr. Trump as an unwitting agent of the Russian Federation.”

She criticizes the Republican congressional leadership for doing everything they could to keep the American public in the dark and vulnerable to attack by a foreign government. She calls Trump “the perfect Trojan horse for Putin.” Overall, the chapter is staggering.

Why did she lose? “I go back over my own shortcomings and mistakes we made. I take responsibility for all of them . . . I was the candidate. It was my campaign. Those were my decisions. Many in the political media don’t want to hear about how these things tipped the election in the final days. They say their beef is that I’m not taking responsibility for my mistakes—but I have, and I do again throughout this book. Their real problem is they can’t bear to face their own role in helping elect Trump, from providing him free airtime to giving my emails three times more coverage than all the issues affecting people’s lives combined.”

“The election was decided by 77,744 votes out of a total of 136 million cast. If just 40,000 people across Wisconsin, Michigan and Pennsylvania had changed their minds, I would have won. I have come to terms with the fact that a lot of people—millions and millions of people—decided they just didn’t like me. Imagine what that feels like. It hurts. And it’s a hard thing to accept. But there’s no getting around it.”

There is more to the book than an analysis of what happened. Hillary is looking to the future and what it means to the United States. “There is no way I am going to waste the time I have. I know there is more good to do, more people to help, and a whole lot of unfinished business. Things are going to be hard for a long time. But we are going to okay. All of us. What do we do now? Keep going.”

After reading the book, a question arises as to whether those who trashed it actually read the book . . . or did they only read some of it? That is a mistake.

What happened? There is no need to imagine because everyone has a courtside seat to the ongoing disaster that is making America irrelevant.