What Future 2018: The Year's Best Writing on What's Next for People, Technology & the Planet 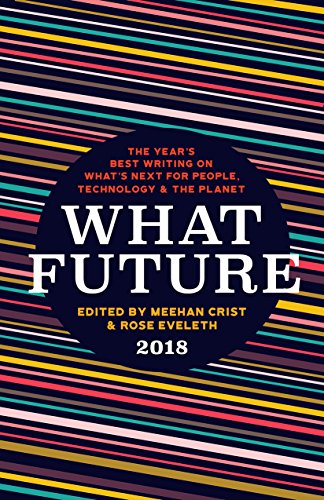 The future is inescapably the past, or so it often seems in What Future. The anthology starts strong with Ed Finn’s “How Predictions Can Change the Future,” which explores how algorithms, from Facebook to Google’s autocomplete, “snuggle right in there between our complacency and our anxiety to fill the empty spaces . . .” giving us what we think we might want based on past decisions but at the expense of explorations that open to new possibilities.

In “Welcome to Pleistocene Park,” Ross Andersen writes of a seemingly quixotic quest to create a Siberian nature preserve complete with bison, wild horses, musk oxen, and laboratory grown woolly mammoths that will spread a grasslands ecosystem capable of (perhaps) preventing tundra from thawing and releasing greenhouse gasses. In the words of the project’s lead scientist: “Playing God doesn’t bother me. We are already doing it. Why not do it better?”

Sarah Laskow’s enchanting “A Forest of Furniture Is Growing in England” understands all too well that “To reshape the world means believing in the promise of sweeping far-sighted plans, and understanding that two millennia might only be half a lifetime. It means thinking in tree time.”

There are interesting explorations of England’s plan for Queen Elizabeth II’s funeral (expected sooner rather than later) and how Luxembourg is leading the privatization of space exploration. What Future’s middle section sags with two unnecessary memoirs, both mired in the past. Walidah Imarisha’s “Science Fiction, Ancient Futures, and the Liberated Archive” raises as many thoughts as thorny questions about what it means to find and preserve the stories of the past in order to provide the knowledge and imagination needed to create a desired future.

Lauren Smiley’s poignant “Someone to Watch Over Me: What Happens When We Let Tech Care for our Aging Parents,” Brishen Roger’s “Basic Income in a Just Society,” and Rachel Riederer’s “The Future of Remembering” all offer a complex and thoughtful analysis of questions that don’t lead to easy answers. Bryan Washington’s “The Future in Motion: Why I Judge High School Debate Tournaments” is a needed reminder that the future belongs to today’s passionate, enthusiastic, and optimistic youth.

What Future leans left in politics and high-tech in science. The arts and humanities, education, and the social sciences are oddly absent, and while climate change is featured, no other environmental or restoration issues are explored. While What Future’s vision is too often narrow, when it ponders the future we are already living in, whether bad (China’s high-tech police state) or good (Estonia’s digital near-utopia), What Future is worth wondering about indeed.