What to Do About the Solomons 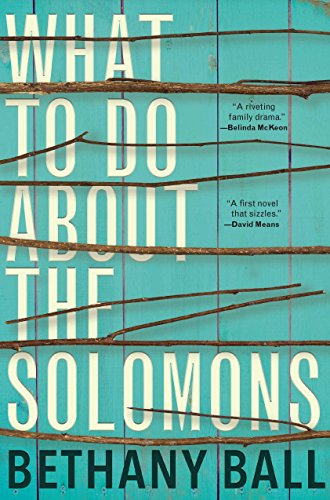 Why do we love the literary family saga? For many of us it's the pleasure of escaping our own less-than-satisfactory family to marvel at an even worse one. Or perhaps it's the comfort of knowing that our own family problems are universal.

The family tree and cast of supporting characters listed on the opening page of What to Do About the Solomons confirms that this is indeed a family saga, centering on the story of Yakov and Vivienne Solomon, still living on the Israeli kibbutz where they have spent their lives, and their five adult children, now scattered around the world. And as with any good literary soap opera, Bethany Ball's enjoyable debut is filled with fighting, betrayal, intergenerational misunderstandings, and a shocking secret or two.

But this novel's interrelated tales of many characters, from inside and outside of the Solomon family, makes it more akin to Jennifer Egan's A Visit from the Goon Squad than to a more conventional family saga, as does its irreverent portrayal of the ennui of the contemporary middle-class, from Marc Solomon and his American wife and children apparently living the American dream in Santa Monica, to Keren Solomon and her family struggling to carry on the traditions of their forefathers on the kibbutz.

Youngest brother Marc Solomon takes up a large part of the narrative: His California-based business is under police investigation for illegal activities, his wife is depressed, and he still has feelings for his childhood sweetheart, Maya. Marc's disillusionment with life is illustrated with a flashback to a truly terrifying episode from his youth, when, as an Israeli army commando, he almost dies in an underwater mission to affix explosives to ships. It is in this moment of danger that Marc feels a vitality he will never be able to replicate.

"The universe withholds something from Marc and it’s up to him to find it again, that click, the sound of the mark found underwater as the device attaches to the ship. Marc will search forever to find it."

The story of his shallow and selfish older sister, Shira, a small-time actress who flits from man to man and dreams of finding stardom in America, also forms a prominent thread in the book, fleshed out by chapters narrated from the point of view of her neglected eleven-year-old son Joseph. Shira still clings to her hopes for romantic love and movie fame, even though she is getting older and fatter:

"In certain clothing, from certain angles, Shira still looks thin. She wears low-cut shirts to show off her breasts. She never wears a bra. She enjoys the way her nipples poke out of the shirt fabric, high and firm. She always wears Spanx in public. When she wears Spanx, she eats less."

Second brother Dror, married and living in Haifa, appears now and then as the bearer of gleefully malicious gossip, a convenient device in a book with so many characters and story strands.

Oldest brother Ziv lives in Singapore and appears in name only. He has disgraced his parents by being gay, especially his seventy-five-year-old father, Yakov, revered elder of the kibbutz and former Israeli finance minister. But Ziv remains the favorite child of his mother, the once-beautiful Sorbonne-educated Vivienne, still stoically at the side of the man she regrets marrying in a country she regrets moving to.

The question in the book's title points to not just to the various existential crises of the members of the Solomon family and their friends, but to the crisis facing the once-flourishing kibbutz system, now in decline. Guy Gever, partner of the oldest Solomon daughter, Keren, seems to personify the state of the kibbutz. The novel begins and ends with Guy's story.

In the first chapter Guy is on the verge of a nervous breakdown as he looks for spiritual direction in life, a breakdown that could be seen as mirroring the decline of the kibbutz system. He is ridiculed by the kibbutz elders for his crazy moneymaking schemes to revitalize the community, but by the end of the book the paintball facility he has introduced has become a success and Guy's sanity has been restored.

A young Yakov Solomon revolutionized the kibbutz in his day by steering it into the construction business, and now next-generation Guy Gever is doing what needs to be done to bring the kibbutz into a new era, leaving us with hope not just for the characters whose troubled lives we have come to care about, but also for the kibbutzim ideal.