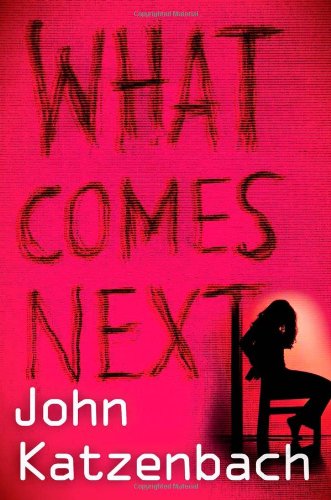 “Reading What Comes Next is an experience akin to riding the scariest roller coaster ride: You gulp with the rush of both trepidation and excitement—and you sigh with relief when it’s over.”

“Inside the black hood that covered her head, Jennifer’s entire world had narrowed to just what she could hear, what she could smell, and what she could taste and each of these senses was limited—by the pounding of her heart, the throbbing headache that lingered behind her temples, the claustrophobic darkness that enveloped her.”

And soon after this portion of the author’s calm narration of the scene, Jennifer hears one of her captors, Linda, state firmly, “From this moment you belong to us.”

The petrified and shivering young Jennifer swept up in a vortex of horror, struggles with her current reality in a dungeon-like room. She is stripped unexpectedly from the outer world and any sense of safety from her previous life.

Chained by the neck to an old metal framed bed with both hands and feet cuffed, clad only her in panties, the reader quickly begins to question why this is happening and more importantly—what will come next.

As the title of this thriller What Comes Next implies, the dehumanization and depersonalization that follows, is unfathomable as each new revelation in quickly unfolding plot is unraveled. It soon becomes known that Jennifer is kidnapped off her street to be the star of a live feed webcast that is being televised worldwide. The audience ranges from college students, businessmen, couples in the creative arts and everything in between.

The reader is privy to a lavish party in a penthouse apartment in Moscow where guests calmly drink vodka and eat caviar as the show is about to start on a large screen television. The eager worldwide audience tunes in to the show with wild anticipation to observe every movement and sound of the show. Viewer’s credit cards are approved by the thousands on the website known as whatcomesnext.com. After approval of a hefty fee, they receive immediate access to what is called “Series Number 4.”

Each subscriber joins the others cloistered in their comfortable abodes as “vibrantly red italicized writing appears, slicing across the frame like a knife carrying the words: What Comes Next.” Along with the live feed comes full access to an interactive board where viewers can post suggestions and comments.

They openly express impatience with what they perceive as a slow scene or dispense rave reviews when the show crosses forbidden boundaries. Some vocal fans on the interactive board vividly describe their morbid pleasure with phrases such as “Kill her! Kill her!” as this real life drama builds in intensity to the anticipated climax of the macabre—torture and death.

The filmmakers and resident torturers Linda and Michael are ensconced in a farmhouse rented with cash as full payment. As they discuss and plan each new possible scenario in the series, the reader hears both their dialogue as a couple and details of each ones salacious proclivities throughout the entire broadcast.

Michael frequently adjusts the camera angles with precision and detail to achieve the intimate close-up for their fans. His obsession with perfection in what he perceives to be film making at its best, is reminiscent of episodes of “Alfred Hitchcock Presents” in which Hitchcock serves as both the director and calmly detached moderator of a nightmare in progress.

As Linda and Michael banter about the series conclusion and plan for “Series Number Five” they are as giddy as two children playing noisily in the park. The more terrified their prisoner becomes, the more passion is ignited between the lovers as they purr with delight while satisfying their insatiable sexual desires.

Author Katzenbach’s portrayal of these main characters mimic real people who would be diagnosed as “sexual sadists” by top-notch criminal profilers. The motivation of these characters adeptly parallel the rare couple that works as a team in a macabre partnership of inflicting pain on others to achieve the heights of passion between them. More often, though, sexual sadists operate alone in their deviant endeavors.

Younger readers of What Comes Next might be reminded of the film Hostel, which is actually alluded to in the book. Aficionados of the horror film subgenre (now referred to as “splatter films” that depict graphic violence and torture with sexuality) will be familiar with the movie’s plot. In the film as in the book, wealthy clients pay a high fee to torture and kill unsuspecting women who have been abducted for this purpose. The millions grossed for Hostel and its sequel were off the charts. If What Comes Next finds its unique set of fans, similar attention might be paid to it.

To fully analyze What Comes Next, one must also mention the intricacy between the couple and the other equally important characters. And as each character is revealed, the plot thickens with subplots that surround the main story and are brilliantly tied in ever so slowly. These subplots both build tension and heighten the mystery of the book.

Author Katzenbach devotes each chapter to another character and then brilliantly weaves them delicately into the main plot in such a way that he creates a thrilling story that is edgy, unpredictable, and mesmerizing.

There are several fascinating characters that are critical to the story. The main one is a retired Psychology Professor named Adrian who spent most of his academic career studying the intricacies of fear. He has been diagnosed with a form of dementia whose symptoms include a rapid decline in cognitive functioning. And he is the only living witness to Jennifer’s abduction. He becomes convinced that he is the one person who can rescue her from a brutal fate.

To cheer him on, providing clarity and direction, are the ghosts of Adrian’s deceased wife, son, and brother. As he rapidly declines, they speak aloud to encourage him in his pursuit to save Jennifer as well as provide helpful clues.

In addition is Terri the detective who had met Jennifer on several previous occasions when running away from home seemed the best alternative for the young teen at the time. At first Terri is reluctant to believe that there is a nefarious plot going on but ultimately Adrian with his logic and conviction still intact, convinces her of the kidnapping. She becomes personally involved in the case as she contemplates how she would feel if her kids were in mortal danger.

Unfortunately, while in pursuit of the perpetrators, Terri pays dearly.

What Comes Next is replete with paradoxes. The main one is that as explicitly terrifying the story is, the more you want to continue reading. You may feel like covering your eyes as you might in a gory film, but you continue to watch and hold your breath to bear witness to the horrifying conclusion.

“Reading What Comes Next is an experience akin to riding the scariest roller coaster ride: You gulp with the rush of both trepidation and excitement—and you sigh with relief when it’s over.