What Comes After Money?: Essays from Reality Sandwich on Transforming Currency and Community 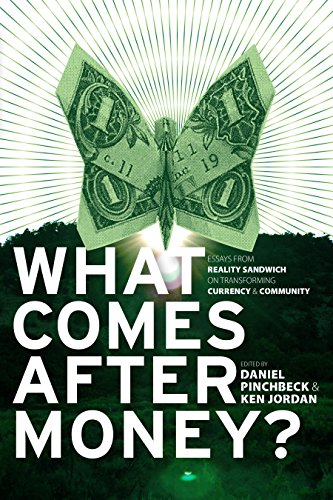 “The contributors to this volume are all very interesting people, but one has a sneaking suspicion that they might have taken way too much LSD at some point in their carbon footprints.”

As Danny DeVito exclaimed in the movie Heist, “Everybody needs money! That’s why they call it money.” For some reason—perhaps they were put off by a dull economics teacher—very few people find money intellectually interesting. In fact, it is a fascinating object of study. It is one of the primary means by which we express value in society. It is a means of exchange, a denominator of exchange, and a store of value.

From its earliest use, as symbolic objects that were traded (knives, jewels), money has been an important driver of local economies and of globalization. According to Herodotus, the ancient Lydians introduced coinage in the seventh century. (As Dale Pendell says, in the book under review, “The Lydians are also noted as being the first to trade items not of their own manufacture, to have the custom of prostituting their daughters, and to arouse the wrath of the Persians.”)

In fact, money as a standardized commodity was introduced around 3000 BCE by both the Egyptians and the Mesopotamians. Coinage became more of a stylized commodity, fiat currency (paper money not backed by any other commodity) took money a step further as an abstract concept, and today a ubiquitous means of exchange is electronic payments based on identity claims. Echoing Giambattista Vico’s 1725 text on The First New Science, John Michael Greer writes that complex societies transform from the concrete to the abstract. Such is the case with money.

Given how interesting the topic ought to be, one has high hopes for a group of creative authors who contribute essays to What Comes After Money? Originally published online for the web magazine Reality Sandwich, this book demonstrates that gathering a group of very interesting people and asking them to think about an interesting problem does not necessarily mean that they will come up with interesting ideas.

Reality Sandwich describes itself as a web magazine with subjects running the gamut “from sustainability to shamanism, alternate realities to alternative energy, remixing media to re-imagining community, holistic healing techniques to the promise and perils of new technologies.” It says that its “goal is to inspire psychic evolution and a kind of earth alchemy. “

The authors who wrote essays for the magazine, which appear in this volume, are a diverse bunch. They include the founder of Burning Man, a popular DJ, yoga teachers, the Grand Archdruid, and one or two academics. On the face of it, they have little in common. But most share a concern about climate change and many are Marxist (or try to be—perhaps they should read Marx a bit more carefully).

Yoga and Buddhism, mother earth, native American traditions, peak oil, and the exploitation of everything are more likely to be found in this collection of 23 essays than in most books on money. As Sharon Garron writes, “We live in a slave culture. Our present economy is based on the domestication and exploitation of animals and nature.

Many of the authors seem to share a view that the present economic crisis is the last act of the capitalist system. This has always been a common refrain in Marxist writing, which constantly predicts a final crisis of capitalism. Just as Marx was disappointed by the revolutions of 1848, this group of writers is likely to be disappointed by the financial crisis that started in 2008. On the other hand, a stopped clock is right twice a day.

So if this group of authors is correct, and the money-based economy is facing collapse, what comes next? Antonio Lopez suggests, “In the midst of this richly unfolding economic crisis we can discover how the power of flower and song will sustain anyone with an alternate vision of our place in the world.” Anya Kamenetz suggests we humanize the economy. Ellen Pearlman thinks what happens depends on how we perceive it.

Four of the chapters describe experiments with local or community currency, a modern form of mercantilism that dates back to at least the 1930s in Austria. Included in this idea is LETS, or a local exchange trading system (which appears to be barter on the face of it, but is essentially the same thing as an electronic payments system). Community currencies have drawn the skepticism of political economists, but one must grant that they are real experiments with real results.

Stella Osorojas describes Time Banking in Santa Fe, in which the means of exchange and store of value is one hour of labor, with all hours valued equally. Philosophically, this was one of the most innovative experiments, and one is left wanting to know more about it. Perhaps because the essays discussing these systems are the most grounded in reality, they are interesting narratives.

By far, the majority of the authors call for a gift economy, which is a more common form of exchanging things of value than you (or the authors) might think. Anthropologists have long pointed to the existence of gift economies, usually in isolated (some would say “primitive”) societies. (The Trobriand Islanders in Papua New Guinea are an oft-cited example.) Gifts are given by everyone, so there is a generalized reciprocity. And in some societies gifts are given to improve social standing.

Book reviewing is a type of gift economy. Whatever motivates reviewers to spend time writing, it is not a form of compensation that is accepted at most purveyors of sustenance. There are many other examples of social networks of goods that are gift economies (open-source software is one). It is more prevalent than the authors indicate, but a gift economy is not likely to take the place of the financial sector any time soon.

On a completely separate note, having nothing at all to do with book reviewers (ahem), the gift economy is often idealized by anarchists, particularly the anarcho-communist school of Kropotkin. But Kropotkin’s theory was very well thought through—he would have had little patience for New Age approaches to economics.

The contributors to this volume are all very interesting people, but one has a sneaking suspicion that they might have taken way too much LSD at some point in their carbon footprints. To be fair, the one author who might admit to such experience is also the most fun to read. Eliezer Sobel relates an experience for which the setting is a hot tub at Esalen in Big Sur (he is the author of The 99th Monkey: A Spiritual Journalist’s Misadventures with Gurus, Messiahs, Sex, Psychedelics, and Other Consciousness-Raising Adventures), and his essay was among the book’s most amusing, interesting, and well-written.

For a group of people who apparently believe that we live in a period when meaningful change is possible, and that a solution to our problems lies in a gift economy, there remains one very big question. Why is this work gathered in the traditional manner, in an edited book, which will cost $18.95 ($21.50 in Canada) when every single one of these essays is available for free on RealitySandwich.com?

After studying all of the essays carefully, here is a piece of advice for the potential reader: Don’t spend money—however you may conceive of it—on this book. Some of the essays are worthy of your time, but they are best consumed in ones and twos at no charge.