What Are We For?: The Words and Ideals of Eleanor Roosevelt 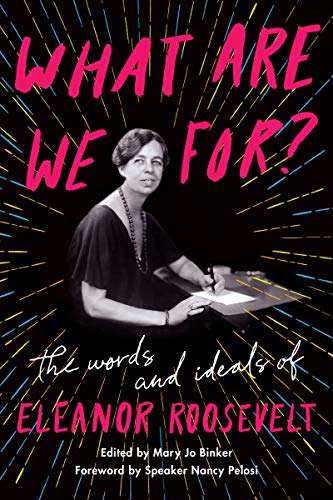 As humbling as it is to write about Eleanor Roosevelt, her own words best represent her to the world. In What Are We For?: The Words and ideals of Eleanor Roosevelt, edited by Mary Jo Binker and foreword by Speaker Nancy Pelosi, some of Mrs. Roosevelt’s best thoughts on life are distilled for the interested reader. Chapters are arranged by topic from politics and government, most auspiciously, to everyday life of women, men, and gender, to emotions and habits. These quotes are garnered from the many published writings and speeches of Eleanor Roosevelt, which are contained in the extensive bibliography.

As editor Mary Jo Binker capably provides, “Much of what Eleanor did and said was based on two profound convictions: first, that every individual mattered, and second, that every individual had a contribution to make.” She goes on to say, analytically, “Besides the sheer breadth of her interests, one of the most striking things about Eleanor’s life and thought is her conviction that many of life’s problems, whether personal or political, had their roots in fear.”  However, Eleanor’s outlook on life was not all dire. Binker offers an important insight with “Failure was simply an opportunity to try again,” and “.  .  . curiosity was the gateway to learning, understanding, and ultimately solving the difficult problems of her time.”

Many nuggets of wisdom from Eleanor Roosevelt can be gleamed conveniently from this short 256-page book. On politics, as quoted from her Tomorrow Is Now, “A group has solidarity.  An individual alone has only his courage and his integrity.” While on political parties, she says, “The value of our two-party system lies in keeping an even balance between the two, and not letting either one become too secure at any time,” from her article, “How to Choose a Candidate,” in 1932.

Paradoxically, she goes on about political leadership with this thought, “A politician interested only in his own personal advancement is not only useless as a public servant but he will eventually fail,” from her You Learn by Living. On government, Eleanor offers, “The price of good government is constant vigilance and the participation of a strong and influential people who want good government on an active basis,” from one of her 30-year daily columns, My Day.

On law and democracy, Eleanor challenges us with this admonition, “.  .  . you must abide by a law until it is changed or you will be flouting the fundamental things that make us a democracy and a law-abiding nation.” (My Day, 1956). And further, “.  .  .  there is no way of insuring that a dictatorship will remain benevolent or that power once in the hands of a few will be returned to the people without struggle or revolution,” from “The Struggle for Human Rights” in 1948.  Also from the same article on totalitarianism, “Among free men the end cannot justify the means.  We know the patterns .  .  .  the single political party, the control of schools, press, radio, the arts, the sciences, and the church to support autocratic authority.  .  .  .  These are the signs of reaction, retreat, and retrogression.”  In her Foreword, Nancy Pelosi, who comes from a committed Roosevelt Democrat family, quickly reminds us that, “In these troubled times, we all could use Eleanor Roosevelt’s wisdom, every day.”

Duty to service was Eleanor’s hallmark as we are reminded with her statement, “The chief duty of the citizen is to make his government the best possible medium for the peaceful and prosperous conduct of life.” (You Learn by Living). Furthermore, on patriotism and voting, she tells us, “Real patriotism means that you look ahead to what is going to benefit your own country  .  .  . [and] to learn to work with other nations of the world,” from “Why the United Nations is Unpopular .  .  . in 1952.”  And, “.  .  . It is only easy to overthrow democracy where the sources of information are not available to the average citizen.” (My Day, 1936)

In this more enlightened age of women’s rights, it’s notable that Eleanor uses the male form throughout her writing, but she states in My Day, in 1937, “As a rule women know not only what men know but much that men will never know.” Furthermore, she tells us, “There is great consciousness of feminism only when there are many wrongs to be righted.” (White House press conference, 1944). And, “If women really understand the issues they will probably talk more effectively to their neighbors than any of the men, especially if the issues are such that they affect their daily lives.” (My Day, 1955)

Eleanor Roosevelt felt deeply about race and ethnicity, freedom and rights, war and peace, and of course, the United States and the world. To each of these, she lent her considerable wisdom based on having “learned by living.” Some of this (immigrant) reviewer’s favorite quotes are listed as follows:

“Mutual respect is the basis of all civilized human relationships.” (You Learn by Living)

“Prejudice so blinds us that we see only what we expect to see, what we want to see.” (Tomorrow is Now)

“Many a good citizen not born in this country has, perhaps, a greater appreciation of what it means to live in a free and self-governing country and, therefore, a greater sense of responsibility for preserving the democratic way of life.” (My Day, 1943)

“.  .  .  many of us have forgotten that our ancestors came here and made this a land of refuge, and that some of our best citizens have been the sons and daughters of refugees!” (My Day, 1946)

“Freedom must always be qualified by the fact that your own freedom must not mean somebody else’s slavery.” (It’s Up to the Women)

“Freedom of expression must be guaranteed to all, not just to those who think in one particular way.” (My Day, 1951)

“People who have glimpsed freedom will never be content until they have secured it for themselves.” (“The Struggle for Human Rights,” 1948)

“Somehow we must learn to live together or at some point we are apt to die together.” (My Day, 1959)

“We can’t take it for granted that we are the only trustworthy people in the world and we must believe in other people’s intelligence and good intentions if we expect them to believe in us.”  (Letter to her daughter, Anna Roosevelt Boettiger, 1943)

“No one likes the rich uncle who flaunts his wealth in the face of your poverty; .  .  .” (India and the Awakening East)

“Our impact on the rest of the world is the sum total of what each of us does as private citizen.”  (Tomorrow is Now)

“ .  .  .  women and children should be helped regardless of political ideas, and food and medical supplies should not be used as a political weapon.” (Letter to Harry Boardman, 1947)

“What we need from our past history is to learn its lessons, profit by our mistakes, analyze our successes, find out all that it has to teach us.” (Tomorrow Is Now)

“The future is literally in our hands to mold as we like.” (Tomorrow Is Now)