What's the Economy For, Anyway?: Why It's Time to Stop Chasing Growth and Start Pursuing Happiness 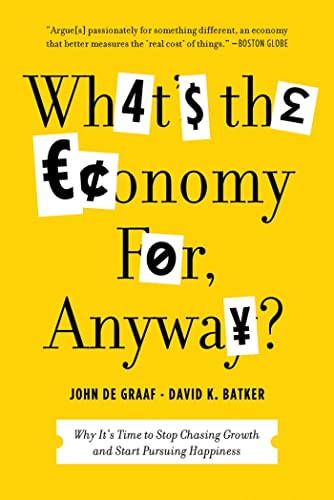 “This is a well argued and clearly written work that will appeal to a wide variety of readers with a broad spectrum of interests (previous knowledge of economics is not a prerequisite). The book makes eminent sense. It ought to be required reading. And even better, it is desirable reading.”

Part of the reason was that the authors begin the same way that I have routinely begun classes on International Political Economy for 30 years: by explaining that our primary indicator of economic well-being—the Gross Domestic Product, or GDP—is an estimation of the total aggregate of what Americans consume (from domestic producers), and bears only a tangential relation to what we value, or even what is economically productive.

When Lorenzo Da Ponte, the librettist for Mozart’s most beautiful operas, came to the United States to teach Italian at Columbia University, his contribution to the GDP was measured by whatever tuition students paid to attend his classes. But when a person buys and consumes a cigarette, goes to the hospital for cancer treatments, and passes away, that all adds much more to how we measure our economy. Is smoking truly more valuable than writing Don Giovanni?

As Robert Kennedy noted in a 1968 speech, the Gross National Product (GNP is a similar measure that takes imports and exports into account) “does not allow for the health of our children, the quality of their education, or the joy of their play. It does not include the beauty of our poetry or the strength of our marriages, the intelligence of our public debate or the integrity of our public officials. . . . It measures everything in short except that which makes life worthwhile.”

But the intelligence of our public debate (which by Kennedy’s standards would currently make us one of the most impoverished nations in history) seems fetishistically focused on economic production. When Americans are asked if they would like to live in one of three hypothetical nations—one with economic equality, one with slight inequality (which turns out to describe Sweden), and one with severe inequality (which represented the U.S.)—almost all Americans of all political persuasions prefer an economy that is more like Sweden’s, and the last choice in the poll was the economy that was most like the one we live in.

Sweden built its economy on Democratic Socialism. Most Americans’ uneducated attitude is similar to that of one of my neighbors. In a discussion about the recent actions of the Governor of Arizona, who slashed corporate taxes and then had to lay off teachers and remove sick people from the public health rolls, he asked me if I was a socialist. When I admitted that is the direction of my political leanings, he drawled, “Well buddy, you’re sucking on the hind teat.”

Just as many citizens know that America is the best nation on Earth, because they have never been anywhere else, most are ignorant of the fact that social democracies are richer than the U.S. by traditional measures like GDP. And its citizens are healthier and better educated, take care of the elderly with state pensions, have more free time, and do not criminalize and imprison people at rates seen only in banana republics (I refer, of course, to the incarceration rates in the U.S.).

Questioning the composition of the GDP is important because it does not properly take into account basic statistics: such as how healthy we are, or how long we live. The United States spends much more money per person than other nations on healthcare (which adds to the GDP). But we do not provide healthcare to many underinsured (even with the passing of a healthcare bill modeled on Mitt Romney’s policies in Massachusetts). Our life expectancy is dropping. And Americans suffer more than citizens of other wealthy nations from stress. The stress is due to inequality, overwork, and financial insecurity. Stress is “the new tobacco,” according to one expert.

The authors propose that a new measure of the economy ought to take into account the greatest good, for the greatest number, over the longest period of time. They argue that we ought to take our founding document, The Declaration of Independence, seriously; especially the part that describes the truths we hold to be self-evident: the right to life, liberty, and he pursuit of happiness. While paying serious attention to the pursuit of happiness may seem to be a fairly wishy-washy proposition (and doesn’t it tell us something, that the current economics profession would view it that way!), there is good social science research on the correlations between economic conditions and happiness, and in fact many countries that are wealthier than the U.S. by traditional measures are also happier.

People in those countries have more equality and more free time, so they are healthier and happier. Americans seem to think there is a trade-off between security and liberty. But in nations where workers have a good social safety net, and free time to balance life and work, they feel more free to pursue the passions that move them. So the greatest good for the greatest number is consistent with what we intuitively envision when we think about wealthy economies.

In the recent past, the U.S. boasted the best system of higher education in the world. And it became more accessible to everyone, which improved the “human capital” of our economy. But today only 37 percent of Americans graduate from college, which is far behind the nations that are outpacing us economically.

We give tax breaks to wealthy people and corporations, their wealth increases while everyone else gets poorer, our economy suffers, and we produce a new generation of uneducated voters. They know that they are angry, and they have every right to be, but they are too ignorant to know with whom to be angry.

None of these propositions surprised me, but this book presents them so sensibly, so clearly, and with such solid evidence, I was fairly amazed that these ideas are not more mainstream.

What did change my mind was the section on sustainability. “For the longest period of time” is not always a given in cost/benefit analysis. It is often possible to take a very big profit in the present, and to invest that profit in a way that makes it more advantageous than smaller future profits.

Messrs. de Graaf and Bakter present arguments for the value of our natural resources, and for investment in preserving them. As they point out, if all seven billion people in the world enjoyed our lifestyle, they would require four more planets of the earth’s resources.

But that is a static analysis, and the authors do not consider the economics of exhaustible resources that, for instance, Harold Hotelling outlined in 1931. Our current lifestyle is not sustainable for the rest of the planet’s population, or for our own future growth if nothing changes. But change is quite possible, given that resources will become more dear, and our use of them must become more efficient. That is not inconsistent with the sustainability that the authors call for. The question is what will motivate the investment to make the use of resources more efficient for the longer term.

As the authors point out, natural resources produce an extraordinary variety of goods and services, they are the basis for all “built capital,” and they require less maintenance than built capital. The problem is that some of the “goods,” such as flood prevention, water, water filtration, habitat, oxygen, beauty, and so on, are “public goods.” When they are destroyed there might be a short-term private benefit, but there is rarely a long-term private benefit to preserve the same natural resources, or to use them more efficiently.

Both our systems of economic analysis and our laws on property make it difficult to justify sustainability from a cost/benefit standpoint. There is an analogy in the private benefit that snake-oil salesmen used to derive from selling poisons as medicines that were deleterious to the public. The creation of federal regulations transformed that market from “buyer beware” to “seller be honest.”

A change in the way that governments consider assigning property rights for public goods also changes the way we perform cost/benefit calculations. Just as consideration of the greatest good for the greatest number would change the discourse over economic policy, changing the rules and the metrics for how we value and assign ownership of the benefits from natural resources would change our cost/benefit calculations.

The authors follow with a brief history of how economic and financial regulation has evolved through U.S. history, explain how this led to the current financial crisis, and conclude with a set of incisive policy recommendations. The brief history makes sense for fully developing their argument, but it covers a huge field with much debate. One chapter on the history of the role of government cannot consider the various arguments in nearly as much detail or as convincingly as the preceding sections.

And I remain dubious that a government focused on the greatest good for the greatest number over the longest period of time would have necessarily engaged in the regulation that might have prevented financial intermediaries from causing a double-dip depression.

This is a well argued and clearly written work that will appeal to a wide variety of readers with a broad spectrum of interests (previous knowledge of economics is not a prerequisite). The book makes eminent sense. It ought to be required reading. And even better, it is desirable reading.