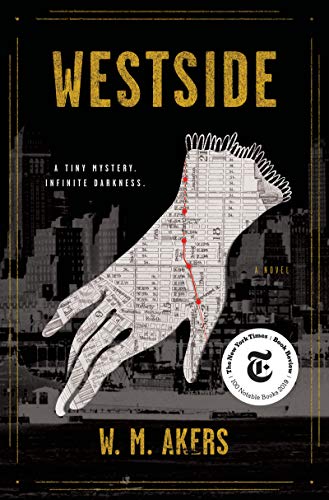 “Beverly Cleary once said great fiction should be, above all things, a pleasure to read, and Westside is certainly that, and then some.”

Gone are the days when genre books unequivocally belonged in the category in which they were labeled. Even better, gone, too, are the times when those same genre books would not be considered literature, regardless of the quality of their prose.

A great example of this newish state of things is Westside by W. M. Akers, a fantasy novel that is both literary and convention bending, reading as horror, crime fiction, dark noir, pulp slasher novel, action, and adventure gaming script, hidden-door-anthropological-history, delayed coming-of-age novel (what happens when an adult 28 years of age thinks like and exhibits the impulse control of a teenager), gumshoe mystery, a love letter to pre-Prohibition New York City, and—would you believe?—a disquieting dystopian fable reminiscent of Lewis Carrol’s Alice in Wonderland.

And yes, it is all of those things simultaneously, using only one narrator and one point of view to tell a complex story, and yes, (for the most part) it works, thanks in no small part to Akers’ talent for staying in tense control of his story while delivering heady, over-the-top prose and quick-paced Raymond Chandler-like dialogue:

“The stink of fish faded as I stepped onto Broadway, crowded and gleaming and smelling of money and judgment, and the fence blocked my path. Even in the punishing glare of the sun, it was a dark thing—thirty feet of wrought iron topped by sharpened spikes, stretching up the middle of the avenue, dividing the healthy Eastside from the deserted west. In the middle was a little door guarded by a little man whose uniform buttons sparkled in the light. I danced through the sludgy traffic and slammed against the iron.”

That 13-mile fence is at the center of the citywide conspiracy threatening two dimensions that tiny mysteries P.I., Gilda Carr, must solve. And what begins as the questionably trivial pursuit of a woman’s missing glove quickly turns into a question as transcendental as any question can ever be: the death of a way of life, of a people’s way of being in the world, especially if when it dies, it takes with it the people who fused under its flag, deriving their identity from it, as well as the place, in this case a city, they called home.

The result is an epic turf war between the forces that control and segregate Akers’ version of 1910s era New York’s Lower Westside from its Upper counterpart, with the Eastside looking on as half the island first disappears, then reemerges to destroy its other (there is no better) half.

“Slummers. They are a plague on the Lower West, traipsing through our alleys, drinking our liquor, staining our gutters with their blood. I might have screamed at Edith for taking such a stupid risk or pushed her into traffic for risking my life on a lie, but the blood was receding from her eyes, and a smile was sneaking across her lips, and it didn’t seem right to knock her back down.”

This Manhattan civil war must be fought even as the Westside faces complete extinction. Everything is disappearing: people, houses, businesses, things as harmless as stair banisters and spices:

“Bullshit. You take the bannister, okay. Your father’s office gone—fine, that is your life, not mine. The condiments go sour, I buy new ones. We don’t have the money, but I find it, because that is what I do. My coffeepot slips away while my back is turned? I say goodbye. I don’t ask questions. I’m not your mother. I’m not even your housekeeper. I’m just Hellida. I’m just here.”

War will also be the key to the Westside darkness that took Gilda’s own father, a legendary cop, gone without a goodbye, the event that orphaned her and almost succeeded in turning her off big mysteries forever.

But, for a disappearing world, the Westside in Westside has a lot of life: that of the lovingly, painstakingly, drawn world on the page, and that of the sheer number of characters, all unique, all fully-rendered for maximum charmingly-grotesque appeal.

“Van Alen was old, but he was gigantic. He wore an apron the size of my kitchen table, and in his hands, the cast iron kettle looked the size of a tennis ball. He moved slowly, not with the trembling agony of an old man, but with the care that comes with a lifetime of being too big for this world. He set a chipped porcelain teacup down in front of me. The tea was green as sulfur and stank like a swamp. I left it alone, wondering if it would eat through the cup.”

And if Gilda’s engaging voice confuses anyone into thinking Westside is a charming cozy mystery, the scenes depicting the height of territorial war will quickly disabuse of the notion. Please be advised the following quote from the book is graphic and violent in nature:

“As the water swallowed the last embers, I saw Barbarossa in silhouette, one of Van Alen’s swordsman kneeling at her feet. She clutched his hair in her fist, pressed that curved knife to his throat, and pulled until she hit spine. She wrenched his head back like it was on a hinge and sawed against the bone, and the darkness was total.”

Granted, there are places where it is inevitable for genre lit, especially fantasy genre lit, to deviate from classic literature, be who it was originally meant to be, as when it goes on for 50 pages more than it needs, if only to deliver delicious lines such as: “The warriors of the Westside fear nothing—except, perhaps, a grown woman,” or: “They were children playing dress-up, but they would bleed like men.”

This is sometimes a pattern of stories that are more about inhabiting a world than about delivering a story with a taut beginning, middle, and end. In this regard, lots of credit goes to the author for his ability to meander without leaving stray strands of story blowing in the bloody stench of old New York, coming up with answers (even if every so often fuzzy and implausible even by fantasy standards) for every mystery he sets up, tiny or otherwise.

And maybe that is what matters most. Not if books deliver on this category or on that one, if they defy the genre or adhere to it, but if they are well-written and fun to read. Beverly Cleary once said great fiction should be, above all things, a pleasure to read, and Westside is certainly that, and then some.