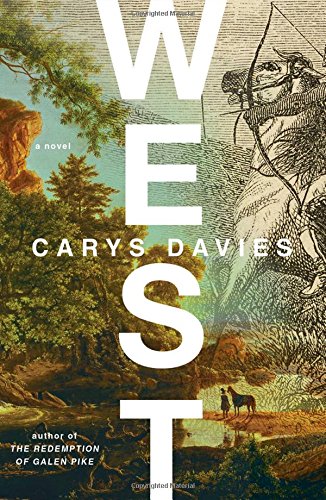 John Cyrus Bellman—widower, farmer, and father to a ten-year-old daughter—seems to surprise even himself one day when he decides to leave everything behind to head west in search of “a creature entirely unknown. An animal incognitum.”

Thus opens Carys Davies's slim debut novel, which takes place in early 19th century America, where most of the land is yet uncharted and wild. It is a land largely uninhabited, unknown, its mysteries an inspiration for anyone with a sense of daring and vision, an innate desire for adventure.

So it is not necessarily a surprise to the reader when Bellman learns of “monstrous bones . . . uncovered where they lay, sunk in the salty Kentucky mud” and decides to head out in search of “the vast beasts the bones had belonged to.”

His newly purchased stovepipe hat atop his head, his goodbyes made to his daughter and sister, who promises to take care of the young girl while Bellman is away, he then “proceed[s] through small towns and settlements along roads, which, though rough and broken for long stretches, [bring] him slowly further and further west.”

This entire journey, however—on which Bellman is also accompanied by a young Shawnee boy called Old Woman From a Distance—is ultimately contained in what amounts to just a few short chapters, making the novel feel a bit too spare given the depth and breadth of the nature of Bellman's undertaking. There is so much more the reader is left wanting, but simply doesn't find in these brief pages.

That's not to say that this novel is not taut, well-crafted, and touching. It is. The father's love for his daughter, his sense of regret for leaving her behind, the doubt he feels, all while still unable to ignore “the prickling feeling he [has] that the giant animals [are] important somehow, only the tingling that [is] almost like nausea and the knowledge that it [is] impossible for him, now, to stay where he [is].”

And it is this very inner conflict that leaves the reader wishing for more: more of Bellman, his daughter, Old Woman From a Distance, even the lecherous town librarian and Bellman's uptight sister. More of an America that no longer is, a country whose own story sprawls and meanders like the rivers that vein its surface and whose circuitous paths Bellman follows, constantly searching, but in the end is left, like the reader, with only a passing glance, a too-quick image as seen from atop a galloping horse.