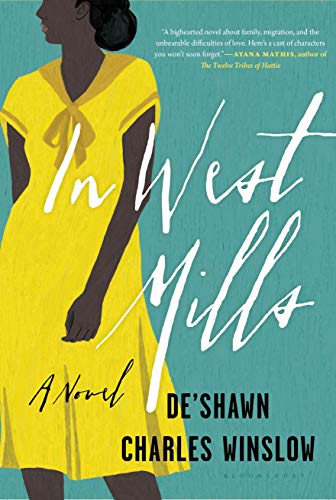 “In West Mills powerfully pays homage to the defiant and affirming spirit of Their Eyes Were Watching God while imagining a vivid and compelling world with distinctive characters that are very much Winslow’s own.”

Like No One Is Coming to Save Us, Stephanie Powell Watts’s 2017 novel that carefully transposed F. Scott Fitzgerald’s The Great Gatsby to an African American community in rural North Carolina, De’Shawn Charles Winslow’s new book, the captivating, heart-rending, and wonderfully funny In West Mills, focuses mostly on rural black North Carolinians and proudly wears its influences on its sleeve.

Although the ghosts of Zora Neale Hurston and (to a lesser extent) Charles Dickens hover over Winslow’s book, neither imposes a framework on his story the way Gatsby does with No One Is Coming to Save Us. Hurston in particular serves as a sort of guiding light, a bearer of lessons well learned by author and protagonist alike.

In West Mills begins in 1941 with a jarring scene in which the book’s central character, Azalea “Knot” Centre, receives an ultimatum from her man: Stop drinking or he’s leaving. After reminding him that she’s a grown woman who will make her own decisions, she sends him on his way with a taunting, “Need some help packin’?”

In West Mills chronicles Knot’s fortunes and struggles and those of the titular small African American community she refuses to leave over the span of a staggering 46 years. Close beside her through the decades are her devoted neighbor Otis Lee Loving, who goes to great lengths to keep Knot out of harm’s way and help her find more stability than she seems to want, and Otis Lee’s frequently fed-up wife, Pep.

There’s more Dickensian intrigue in In West Mills than the characters’ comically on-the-nose, self-descriptive names, and the well-worn copies of The Old Curiosity Shop and other Dickens classics that have remained Knot’s steady companions since she moved away from her parents’ home.

Otis Lee’s parentage remains a mystery through most of his life, somehow bundled up in the deep familial conflicts surrounding a light-skinned half-sister who allegedly sold off the Loving family’s hard-earned land years earlier and has spent her adult life up north passing in white society.

Knot herself endures two unwanted pregnancies and gives up her newborn daughters to childless couples in West Mills with the reluctant assistance of the Lovings. In doing so she alienates both her class-conscious family and the gossips in West Mills, both of whom harshly judge Knot’s fecklessness and her refusal to clear out of a small town where she has two children growing up knowing her only as the hard-drinking woman down the road.

From the outset, Knot establishes herself as proud, prickly, funny, and fallible character willing to choose moonshine over marriage and motherhood, steadfastly refusing to be shamed for the way she lives her life. She’s a fiercely independent woman determined that her mistakes will be her own. “Is it too much to ask for me to live my life the way I want and have folks treat me regular?” Knot wonders.

Besides Otis Lee, who often seems too concerned with her wellbeing for her liking, only Knot’s gay bartender friend and drinking buddy Valley truly “treats her regular.” Not surprisingly, he’s the one person in town with a life less likely to be understood than her own.

Although she never allows herself to be trapped in the sort of self-abnegating marriages that nearly destroy Janie Mae Crawford in Zora Neale Hurston’s Their Eyes Were Watching God, Knot seems instinctively to know what experience taught Janie. She will allow herself to become neither “mule of the world,” as Janie’s grandmother describes black women’s lot in life, or the “rut in the road” that Janie becomes while married to the domineering Jody Starks.

In West Mills powerfully pays homage to the defiant and affirming spirit of Their Eyes Were Watching God while imagining a vivid and compelling world with distinctive characters that are very much Winslow’s own.

Although it’s hardly shocking now, In West Mills reminds readers of two elements of Their Eyes Were Watching God that made Hurston’s classic novel revolutionary and controversial in its own time and for decades thereafter. First, it’s a black novel about black people in which white people are mentioned but almost never appear. Second, it conveys character and humor in dialogue rendered unabashedly in idiomatic speech (albeit more modestly in Winslow’s case) without ever playing the dialect itself for laughs.

Again, it’s hard to imagine Winslow taking any heat for this today, but by evoking Hurston—who, as a folklorist, was dedicated to painstakingly accurate representation even in her fiction, and was unfashionably averse to overt political messaging—he reminds us of the risks she took and the price she paid.

The rare moments in which black and white worlds intersect are, admittedly, some of In West Mills’s most compelling. In one incident—almost a mirror-image of the story Carolyn Bryant made up about Emmett Till that got him lynched in 1955—a white teenager buying candy in a black-owned West Mills store makes aggressive sexual overtures to the black woman who sells it to him. She tells him to leave, and after he calls her “nigger” a few times on the way out, less than 15 minutes later a soda bottle crashes through the store’s front window. As a friend recounts the episode to him, Otis Lee finds himself most disturbed by his friend’s resigned, shrugging conclusion: “Comes ’long with the territory, I guess.”

Perhaps De’Shawn Charles Winslow’s finest achievement in In West Mills is making what comes with that “territory” so vivid without dwelling on it, and at the same time creating such a real, enthralling, and inviting world.