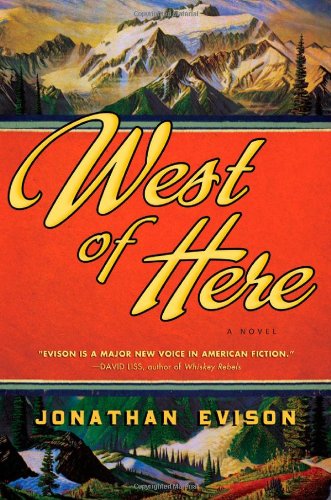 Jonathan Evison’s first novel, All About Lulu, was a compelling coming-of-age story derived from the oddities of family life in the 1960s and their effects on the next generation. While it is a long stretch from that to historical fiction, the impressive aspects of Mr. Evison’s writing are still present in West of Here, expanded and honed even finer.

A mash up of historical fiction and contemporary angst, West of Here is set in the Olympic Peninsula just southwest of Seattle, WA. In November 1889, James Mather sets out to conquer the last frontier of the Washington Territory. He is a 34-year-old Arctic explorer and Indian fighter with an addiction to danger and a compulsion to be the first in any virgin land he enters. It will be the worst winter in the recorded history of Washington.

Other characters include Miss Eva Lambert, feisty feminist from Chicago determined to make her way as a journalist; and Ethan Thornburgh, the father of Eva’s unborn child, who has followed her, desperately desiring to marry her while proving to his wealthy father that he is not a loser. Ethan will become famous for building a dam on the main river, thus bringing electricity to Mr. Evison’s fictional frontier town of Port Bonita.

Meanwhile, the Klallam Indian tribe suffers the depredations of the white man, losing their lands and falling under the influence of alcohol. John Tobin, proprietor of the local tavern, provides the alcohol; his chief whore Gertie befriends Eva; Adam, the census taker, tries to bring justice on behalf of the natives.

A wealth of characters, incidents, and intrigues make for a somewhat confusing read at first. To complicate matters further, the author begins to interweave events from 2006—including contemporary characters that turn out to be descendants of the folks from 1890. All of this requires the reader to be something of an explorer as well, making her own discoveries as she progresses through the novel. Reading the early chapters could require checking back, comparing names, dates and locations, while deciphering the map provided on the first page.

A feeling of being lost in the wilderness will probably upset some readers, but despite the risk he takes, Mr. Evison pulls it off. His writing is robust but terse. He gets to the kernels of basic personality in his characters while adding layers of complexity that bring each person alive, invoking the reader’s sympathy and involvement. Frontier life, challenges of weather and wilderness, the tackiness of a modern dying town, all stand out in broad descriptive strokes with just enough detail.

Best of all is Mr. Evison’s dry humor, reminiscent of T. C. Boyle’s and Michael Chabon’s. He creates a fresh and contemporary approach to the historical genre, tying the present realities of our great but truthfully young nation to the attributes of our pioneer days. In the end, his big, sprawling, entertaining story brings us face to face with the ecological and social consequences of those early days. Without moralizing but with plenty of heart he pulls the past and the present together into a celebration of American spirit.