Wes Anderson: The Iconic Filmmaker and his Work 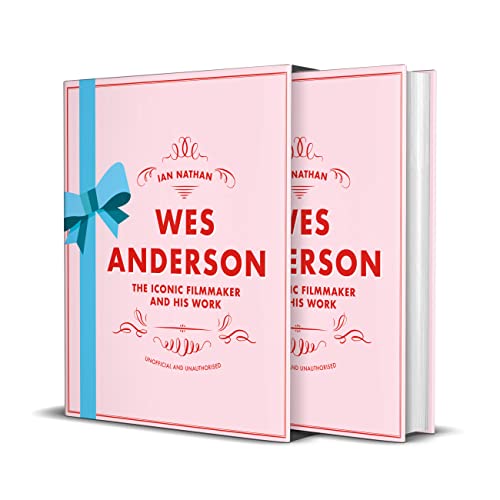 “Wes Anderson: The Iconic Filmmaker and His Work is a satisfying book that will deepen enjoyment of watching (or rewatching) an Anderson film for any fan.”

There are many books about filmmaker Wes Anderson. Some focus on the cinematography or on the illustrated, graphic quality of his films. Others on the quirky scripts. Many seem to be trying to figure him out in order to decide whether he is really a genius, or just an overestimated filmmaker with an eye for color.

Wes Anderson: The Iconic Filmmaker and His Work is different in that it is an inside look at the mind that puts together every aspect of a Wes Anderson film and, as such, it has no use for ambiguity. Yes. He is a genius, it assures you.

As author Ian Nathan writes in his introduction, “He really can’t help being Wes Anderson. His films are extensions of his life and personality, right down to the corduroy suits, alphabetized bookshelves, arty film references, and Bill Murray in badger form. There are times they are almost about themselves—think about the literal film crew of The Life Aquatic with Steve Zissou or M. Gustave’s determined attempts to maintain civility in the face of chaos in The Grand Budapest Hotel. Tormented artists are to be found throughout.”

It is the author’s experience that provides that sense of intimacy, that inside point of view. Nathan is the former editor of British magazine Empire and an expert chronicler and critic, which shows in the conciseness and arrangement of the material, as well as in the beautiful final book achieved with nothing but regular press office visual material and his author/authentic fan’s sense of vision and intention.

In short, the book seeks to give you the nugget. That basic, indispensable insight about each of Anderson’s ten films. The answer to the question, what about what makes Wes Anderson tick went into this or that particular film? For the rest, go back and watch the film again, it seems to say. And in this respect, it succeeds.

Where does it fail? That depends. If you are looking for a comprehensive dissection of motive, or for a social sciences view (social, psychological, or anthropological), then this is not the book for you. But that is by design and not a failure. There is certainly enough fresh insight in Nathan’s succinct book to warrant its place on the bookshelf of any Wes Anderson fan worth their Pantone Pink.

The book is generous with photos, scene stills as well as full color images of iconic film posters. There are also images from the behind the scenes process and of Wes Anderson himself, suggesting that the words “unofficial and unauthorised” are just part of the book’s homage to the filmmaker’s style.

Bottle Rocket, Rushmore, The Royal Tenenbaums, The Life Aquatic with Steve Zissou, The Darjeeling Limited, Fantastic Mr. Fox, Moonrise Kingdom, The Grand Budapest Hotel, Isle of Dogs, and The French Dispatch are all chronicled here. Additional features include an index of Anderson’s more notable short films and featurettes, a visual table of contents of his most important influences, a guide to visual motifs and another one of cinematography touches Anderson uses to seal his style into every movie he makes.

All in all, Wes Anderson: The Iconic Filmmaker and His Work is a satisfying book that will deepen enjoyment of watching (or rewatching) an Anderson film for any fan. As for would-be filmmakers, the best lessons may not be in the explanation of how Anderson approached the adaptation of Roald Dahl’s classic work in Fantastic Mr. Fox:

“The sixth film by Wes Anderson took an unusual turn—the actors were no more than twelve inches tall. In choosing to adapt Roald Dahl’s blackly comic children’s tale of a tailless fox he turned to stop-motion animation, but without losing any of his human insight.”

It might instead be in the emotional principle that went into achieving the human connection that made the film a blockbuster success:

“What makes Fantastic Mr. Fox so delightful is not the breathtaking precision of the animation, but how cunningly it conveys character and a deviant version of modern life. It is a sublime marriage of script and technique. And unlike live action, with its human limitations, with stop motion Anderson could think things up on the spot (which would bring its own obsessions). But first he needed to acquire a Dahl frame of mind. This was, after all,  Anderson's first, and to date his only direct adaptation.”

Or maybe it’s in how his love for his stars translates into directing magic: “‘Murray is different,’ began Wes Anderson, pondering what it was about Bill Murray that draws him like an inquisitive moth to a sardonic flame: ‘He’s the one that I’m most likely to describe as a genius, which I don’t necessarily mean as the highest compliment even, just as more a description of him.’”

Another way to say that for Anderson filmmaking is about the human heart, or about nothing at all.