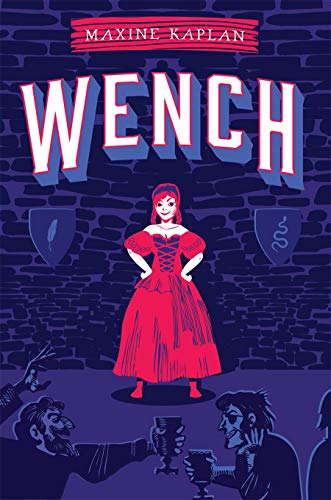 “A tavern maid’s-eye view of epic fantasy is an appealing concept, but in the end, it feels like that eye is looking in too many directions at once.”

In the fantasy land of Lore, the titular tavern wench, Tanya, finds herself bereft of both home and livelihood when the owner of her tavern dies without leaving a will. Determined to reclaim the business for her own, she attaches herself to the company of queen’s soldiers who have requisitioned all its supplies in the hopes of traveling with them to the royal court, but she soon finds herself caught up in adventures involving a magical quill that a great many people seem to want.

The down-to-earth premise and personality of the main character are refreshing, but unfortunately, Wench suffers from a lack of focus on multiple fronts. Tonally, it is neither quite serious, nor quite a send-up of epic fantasy from the viewpoint of a tavern maid.

On the one hand, the plot features many convenient coincidences, like Tanya’s immediate and illogical success in using the quill, or her ability to single-handedly produce a multi-course gourmet meal out of the provisions available in a bandit camp—but the tone is not quite broad enough to sell these moments.

On the other hand, Tanya faces significant threats ranging from violent bandits to a literal demon, but her primary moods seem to be pride in her own skills and irritation at other people’s lack of competence and organization. When she is afraid, it rarely seems to last for more than a paragraph, as when she realizes that she might for the first time be in a situation she can’t control:

“The thought occurred to her: Maybe the [tavern] was the only thing she was capable of controlling.”

What ought to have been a worrisome moment vanishes almost immediately after: by the end of that same page, she’s back to annoyance at her captor’s ham-handed attempts to use the quill, with no lingering sense that she might be in real trouble. Even for a fantasy aimed at a younger audience, the treatment of danger and difficulty feels shallow.

This lack of commitment to emotional depth undermines the relationships as well. Tanya is attracted to several characters (both male and female) and forms friendships with several others, but the foundation for those bonds is thin, especially when the characters in question tend to vanish from the narrative for long stretches of time.

Toward the end of the novel Tanya has a very welcome epiphany that her insistence on self-reliance and her assumption that other people are trying to diminish her means she has pushed away those who care about her . . . but since the story has provided very little foothold for why they care about her, it doesn’t carry the impact it should. She then proceeds to resolve the conflict on her own, relegating the others to the job of rescuing her afterward, which rather undercuts the epiphany.

The end of the novel is particularly frustrating because it holds the most interesting ideas. The narrative pivots a little over three-fifths of the way through, at a point marked by a section break; what follows is much more original than the rolling sequence of people attempting to get and use the magical quill. Early on, the exposition presents the issue of “junkoff”—random mutations of weather and landscape caused by the irresponsible use of the new magic of aetheric manipulation—which holds the potential to be an unusual take on environmental degradation. Once Tanya finds herself in a position to do something about that problem, however, it more or less resolves itself; the answer seems to be that one merely needs to be organized and the issue can be sorted out quite easily, except for one pesky bit which turns out to be work of villains.

Villains who have, unfortunately, been more or less absent from the novel up until that point. Although their home, the criminal town of Bloodstone, is mentioned earlier in the tale, there is no real sense that this is where the narrative has been headed all along. In the final chapters, deeper layers of the setting start to reveal themselves—and they are fascinating! But a revelation that comes in the form of a letter 30 pages before the end of the book is simply too little, too late. If Kaplan had seeded more of that material from the start through folklore and traveler’s tales (which Tanya would very plausibly be familiar with), it could have been more integrated throughout, and it could have carried more impact at the end.

Ultimately, Wench is disappointing in part because of its promise. A tavern maid’s-eye view of epic fantasy is an appealing concept, but in the end, it feels like that eye is looking in too many directions at once.