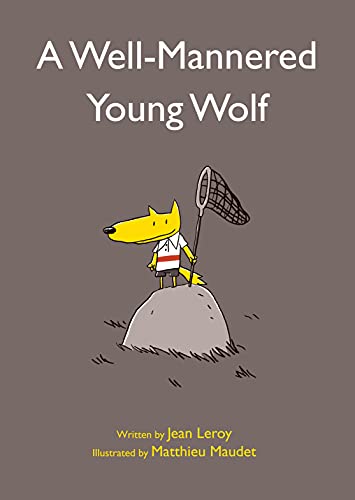 First, the tricky rabbit asks for his freedom, which he cannot have. Rabbit finally decides he wants to hear a story. Not having a story with him, and not being able to say no, the young wolf runs home for his favorite book. Rabbit, held captive by the young wolf’s net, assures the young hunter, “I won’t move a muscle, I promise!”

When the young wolf returns, the rabbit is gone—along with Wolf’s net.

Still hungry, the young wolf refuses to give up the hunt. Spying a chicken, Wolf takes aim and throws his book at the chicken. Wolf has trapped a meal once more. He asks Chicken for his last request. Just like Rabbit, Chicken asks for his freedom, but failing that, he wants to hear a song. Chicken promises, “I won’t move a feather, I swear!” Wolf races home for an instrument.

Upon his return, Chicken is gone—along with Wolf’s book.

Now Wolf is steaming mad, hungry, and tired. Spying his next meal, Wolf climbs a tree, jumps, and captures his third lunch. “What is your last wish before I eat you?” Wolf menacingly asks the little boy. The young boy asks for a drawing. “I won’t move a hair!” the boy says. Having no other choice and, realizing this prey did not ask for its freedom, Wolf runs home for drawing supplies.

When Wolf returns, the boy is sitting on rock, waiting.

Wolf is surprised, so he draws the boy a nice portrait. The boy asks if he can show his friends before Wolf eats him. Smiling at his picture, the boy shows Wolf to his hut. With his back to everyone, the little boy tacks his drawing to the wall. When he turns round, he is alone. The young wolf and the boy’s two friends are gone.

Can you guess who the young boy’s friends were? There are hints. Still, what the young wolf has decided to do no one knows for sure. Readers get the honor of deciding their fate. Does the young wolf honor his parents’ teachings and remain a well-mannered young wolf? Does he honor their last wish, or getting burned, forget it all together?

What are the other options? Could what the young wolf endured change his thinking? Parents, teachers, and counselors all have the opportunity to get a glimpse of the reader’s thinking, if they let him or her answer without input. Of course, once known, guidance may be given.

Kids will love A Well-Mannered Young Wolf simply for the story. Maudet’s comic-like illustrations will draw children into the story, and then the humor will keep them turning pages, even as they figure out what occurs next. With little to distract readers on the clean backgrounds, children will easily remain focused on the characters and their actions.

The young wolf displays his thinking and feelings with his facial expressions. Wolf gladly fetches a book to read Rabbit. Warily he finds an instrument to give Chicken a song. But the boy? The young wolf remains angry and wary until finally returning to see the boy waiting. His faith restored, the young wolf allows the boy to show his friends the art before becoming lunch. Yes, there are distrustful creatures and trusting ones. The author allows young readers to decide how to deal with each. Red clearly signals something important will soon occur; mainly it marks scenes where Wolf captures his prey.