A Well-Behaved Woman: A Novel of the Vanderbilts 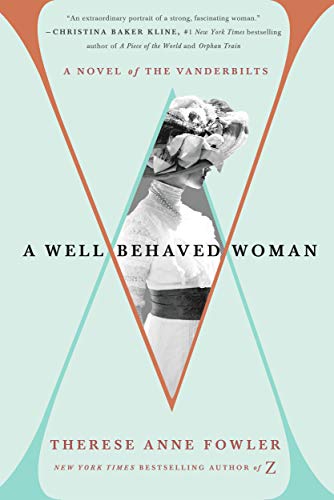 “A tale well-researched and honest, it returns to Alva Smith Vanderbilt that which many historians have taken away: her voice.”

Alva Smith comes from an old, established family and has lived a life of luxury. But with the Civil War and her father’s subsequent illness, unless something drastic happens genteel poverty awaits her. William K. Vanderbilt’s family has benefitted greatly from the same war that devastated Alva’s and, while the Vanderbilts have plenty of cash, they have no connections to the top tier of society that they crave.

With the aid of some clever machinations by Alva’s dearest friend, Consuelo, William K. Vanderbilt and Alva Smith make an advantageous match. It is one that brings her the financial stability of which she is in desperate need, and connects the Vanderbilt family to one of the older families of New York.

But the famed knickerbockers are not easily won over by what they consider to be the nouveau riche, and it is through Alva’s cunning that the Vanderbilts are finally received by society’s finest families, including the Astors.

In spite of Alva’s financial and social victories, there is something missing in her life. Her marriage is not a partnership of mind and heart, but rather a business proposition in which each partner fulfills their duty, not because of affection or love, but because of obligation and expectation.

In order to occupy her time, she sets out on a quest to continue to elevate the family’s social status. She convinces the current family patriarch, William Henry Vanderbilt, to improve Manhattan. She believes that architecture is a way to inspire respect and convinces Father Vanderbilt that, although the family has money enough, “The legacy will languish if none of you is willing to seize this opportunity.”

With Father Vanderbilt’s blessing, not to mention his financial assistance, Alva begins a lifelong love affair with architecture, beginning first with her own home. Before the Vanderbilts are through they will have changed the entire face and complexion of Manhattan.

While architecture, her children, and society occupy much of her time, they cannot fill the void that Alva feels due to her husband’s long absences and inattention. While telling herself she should be happy, she realizes, “a truth she could never say aloud: this ideal life was still deficient. She was not wholly content. Perhaps she should be, but contentment, she had learned, lay beyond money’s considerable reach.”

After almost 20 years of marriage, Alva decides that she has had enough. Against the advice of her lawyer, her acquaintance, and society’s expectations, she sues William K. Vanderbilt for divorce on the basis of his numerous infidelities. Ironically, in taking this stand, it is she that must weather society’s scorn.

While the divorce gives Alva back her independence and self-respect, she is aware that it will not solve all of her problems. With characteristic energy and tenacity, Alva Smith Vanderbilt perseveres and is able to marry her daughter to a duke, continue her elaborate building schemes, work to improve the lot of women on every rung of society, and even find love.

In A Well-Behaved Woman, author Therese Anne Fowler does not glorify Alva’s life. She paints her realistically, with her faults of selfishness and pride, and yet, it is impossible for Alva Vanderbilt to not win the begrudging admiration of the reader. Against the backdrop of the self-indulgent, self-important gilded age, Alva’s interest in politics and her fellow man is in stark contrast to the more shallow pursuits of her set.

Fowler convincingly portrays the limitations of women during this time and the cunning and manipulation they employ in order to survive. Alva Vanderbilt’s own self-worth led her to walk away from what appeared to be an idyllic existence. At a time when appearances were everything, she set out to forge her own path.

Therese Anne Fowler has done more than just simply recount the events of the life of Mrs. William K. Vanderbilt. By reflecting on what may have been Alva’s thoughts, motivations, and desires, she has portrayed more than a one-dimensional angel of the hearth. Rather, we are presented with a complex, flesh and blood woman. While Alva Smith Vanderbilt is generally considered in the context of her wealthy husband’s family, she had a life of her own that is worth exploring. A tale well-researched and honest, it returns to Alva Smith Vanderbilt that which many historians have taken away: her voice.