The weird sisters: a novel, in three volumes. Volume 3 of 3 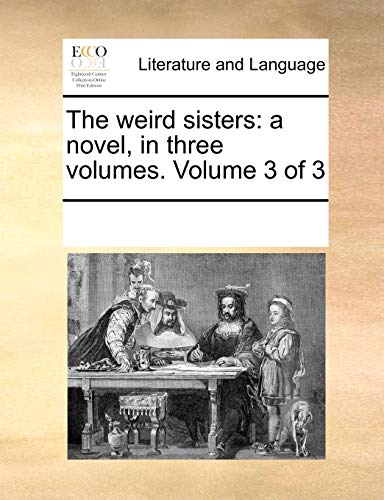 “See, we love each other. We just don’t happen to like each other very much.”

This is the story of three sisters, and of their retired Shakespeare-spouting professor father and a mother stricken with cancer. They are three very different sisters, which is what creates the tension in this family novel.

Firstly, there is Rose (Rosalind), the oldest and the smart one, born six years before the second child and twelve years before the youngest. She has found a perfect man to marry but with one small problem: He’s teaching at Oxford and wants to stay there, thank you very much.

Secondly, there’s Bean (Bianca), the glamorous middle daughter fired from her job in New York City due to a crazy little thing called embezzlement. She’s not quite perfect.

And, thirdly, there’s Cordy (Cordelia), the baby, the wild one pregnant with the baby of an unknown father. Cordy’s always been a wanderer. Is she finally ready to settle down?

It’s their mother’s cancer that brings them back together under the same roof in a small town in Ohio. There’s not much oxygen to spare. . . . You are likely thinking that this is going to be one very predictable read; if so, you would be wrong. This is a novel that surprises and delights. Author Eleanor Brown seems to tell the story flawlessly—I kept searching in vain for the seams in the tale. They’re there somewhere, but they seem to be woven with invisible thread.

Brown’s journalistic voice contains a beautiful tone—it is never too strong nor too weak. It simply feels like one is listening to someone accurately describing and detailing the events of three sisters’ lives. And there’s likely more than a trace of real life in this tale, as the author just happens to be the youngest of three sisters.

Anyone who loves literature and the greatest writer in the English language will treasure Brown’s highly educated and clever references to the writings of William Shakespeare. Each of the daughters is, of course, named after a character in one of the Bard’s plays, and their lives sometimes feel as if they’re but characters in a theaterpiece.

As the story unfolds, each of the daughters must deal with their mother’s mortality and with their own coming to grips with what it is they actually want out of life. In one sense, each of them must decide between an external version of success and an internal one.

Boomers and those of a younger generation will identify with the struggles of these late-maturing sisters: “When had our mother gotten so old? Was it just because she was sick? Or was this happening to us all without our noticing? . . . There was no use wondering about it—we were all getting old.”

“We were all failures,” thinks Bean at one point about herself and her siblings. But they all wind up successes in a story that is wrapped up so beautifully well. Contentment is the reward for the reading.