Weightless: Making Space for My Resilient Body and Soul 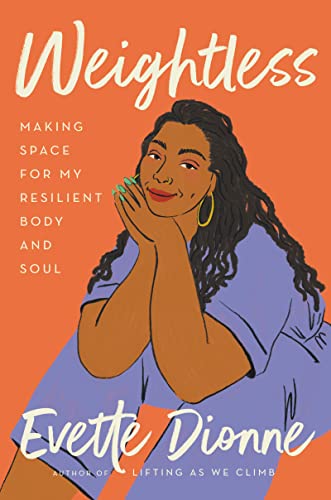 “Evette Dionne spares readers none of the agony she suffers being a large woman in a small-minded world . . .”

The world would be a better place if everyone read this book of essays, but many people will shy away because of its squeamish subject matter: What it’s like to be a fat person—a fat, Black woman, to be specific—in a deeply embedded culture of unbridled fat phobia, sexism, and racism. Journalist, editor, pop culture critic, and author Evette Dionne spares readers none of the agony she suffers being a large woman in a small-minded world, and her hope is that, after reading Weightless, you’ll join her in changing the conversation about fatness.

She wrote this book, part memoir and part self-love manifesto, “to shift how we individually and culturally understand the fat experience. Most important, it’s a book for fellow fat people who want, need and deserve new stories.” Her takeaway message is that “Fat people aren’t a problem that needs to be solved.” The problem, instead, is our culture’s insidious, blame-the-victim belief that we can hate fat people—and they can hate themselves—thin.

Dionne sites scientific studies concluding that weight bias—in our families, communities, culture, and especially in our health-care system—is a major contributor to emotional and physical problems for fat people. She proves her point about medical weight bias in a chaptered bolstered by statistics and stories of how doctors have mistreated and failed their fat patients.

Dionne has a righteous axe to grind. She was repeatedly misdiagnosed when she had heart failure and pulmonary hypertension and told that her symptoms were due to being fat, which left them untreated and almost killing her. This is a common problem for many higher weight people who too often suffer at the hands of health providers who either ignore their presenting problems or assume weight loss will cure them.

The author moves from essay to essay tearing down myths and giving us the facts. She explains how weight-loss diets fail 95% of dieters long-term, a fact that’s been known for more than three decades, and how body dysmorphia is an all-too-common consequence of our slimness obsession. She describes how these diets cause rebound eating and make us fatter, and how even well-meaning, much touted programs like Michelle Obama’s Let’s Move!, put an unwanted spotlight on higher weight children which wrongly focuses on what, not why, they eat, creating “another generation of children struggling with unhealthy relationships with their bodies.”

Chronicling her experiences dating while fat, Dionne shows what it’s like to quest for love in a large body. From one-night stands to being catfished on the internet to having boyfriends from skinny to fat, all she ever wanted was what we all want: to be loved and cherished in a normal, healthy relationship. Critiquing social media, films, and television, she criticizes their negative stereotyping of higher weight characters (with some exceptions) and how “women celebrities of all sizes are treated as objects rated on a fictional ‘fuckable or not’ scale.” Her assessment of bias in the fashion industry highlights how higher weight models suffer in numerous ways because of their size.

Dionne tackles race, including cultural stereotypes of Black women as hyper-sexual or nurturing Mammies and how institutions have profited by locking them into these roles. She gives a shout out to Queen Latifah and Lizzo for breaking the mold as Black higher weight celebrities, though she takes issue with superstars who use their fame to tout weight-loss products and approaches that don’t work and never will.

Beyond pointing the finger at institutions for proliferating fat phobia, she provides a raw account of how it has impacted her. The message she internalized from society was that “as fat women, we should cover our bodies lest we corrupt innocent people with our stretch marks and rolls.” Body shame caused her for years to have sex with the lights off because she didn’t want to be seen in her nakedness, although she enjoyed being a sexual person and, as a child, not wearing clothes. She shares exactly what it’s like being the only fat woman in the room and the overwhelming self-consciousness this made her feel.

Moving back forth between the up close and personal to the broader culture, she shares her and other fat women’s humiliating experiences flying in narrowed-for-profit airline seats, and a critique of ongoing, alarming public pronouncements linking obesity and dying from the Covid virus.

These hardships, Dionne explains, are born of our culture being taught that fat is bad and dangerous, and that fat people are defective and don’t care enough to effectively manage their bodies. We’re made to think that one size should fit all, genetics, trauma, poverty, food deserts, and racial and sexual discrimination be damned. She says that “fatness comes with a punitive burden” and is “treated like a crime.” Though not illegal, fat and weight talk have been so seamlessly absorbed into our values, policies, and conversations, that we don’t even realize it.

As poignant and painful as Weightless is to read, it is also oddly uplifting because of Dionne’s resilience, brutal self-examination, transparency, passion for a more diverse and just world, and because of her conviction that “it’s more feasible and healthy to change our fatphobic world than attempt to control fat people’s bodies.” This book is a call to action to make sure this happens.