The Weight of Being: How I Satisfied My Hunger for Happiness 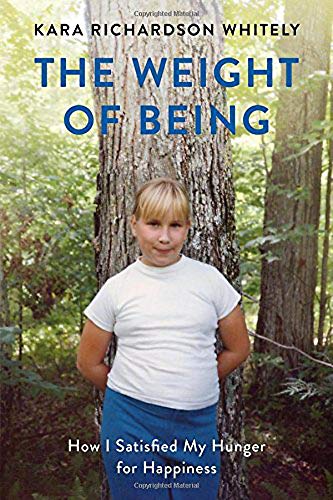 Kara Richardson Whitely’s double-entendre of a title, The Weight of Being, wonderfully captures her physical and emotional life as a person of higher weight. In spite of successfully having climbed Mt. Kilimanjaro at 300 pounds and survived a dysfunctional childhood that involved PTSD from sexual abuse, her father’s heartbreaking abandonment of the family, suffering as the targetof fat stigma, near disabling self-doubt, body hatred, depression, and low self-esteem—all of which she writes about in lively prose with touches of self-deprecating humor—the one thing that she’s unable to do is to have a consistently sane, sensible relationship with food. Having begun dieting in middle school, she knows how to starve herself and lose weight, but the pounds always pile back on.

The book describes the discomfort of moving around in a large body well enough to live a functional life, as well as the mental toll of striving to feel normal in a world that adores thinness and abhors fat. The author’s successes, setbacks, healing, emotional growth, and the sheer force of her determination to triumph over her eating problems should put to rest the outdated notion that binge-eating and emotional eating are due to indifference to one’s health, gluttony, ignorance, insufficient willpower, or lack of motivation.

Whitely’s plight is sadly common: the majority of people who diet and lose weight regain it—often along with extra pounds—due to complex metabolic processes. Moreover, as she learns along the way to health and happiness, her childhood of adverse experiences relieved by comfort eating sets her up for anxiety, depression, and a deficit of coping skills in adulthood. Add to that living in the most fat phobic, thin-obsessed society in the history of the world, and we can’t help but have compassion for the weight-loss deck being stacked firmly against her.

When the book begins, we enter Whitely’s world in which she’s doing her best to be a loving wife and devoted mother as her weight balloons up and up. She introduces us to her husband, Chris, who literally loves her through thick and thin(ner), and we get to know her children, Anna and Emily, and later, Elliot.

Parents who have a distorted relationship with food can identify with Whitely’s gnawing worry about teaching her children to eat healthfully, mindfully, and for nourishment, rather than devouring food or sneak-eating it as she does.

People of higher weight can relate to her struggles to exercise and feed herself well, while feeling shame, disappointment, and despair that she will never sustain a comfortable weight or stop yo-yoing up and down the scale. Those who love someone who struggles with food and weight can feel the pain that his or her loved one may not be able to express in words and which Whitely articulates so clearly.

Throughout the book, whether Whitely is planting a garden so that she and her family will have greater access to nutritious food, participating in a race to raise funds for UNICEF, laboring to climb Kilimanjaro for a second time, or going about the everyday business of being a wife, mother, and award-winning writer of books and articles, we want to cheer her on.

Because she so fully opens the door into the dark and painful parts of her life—miraculously without sounding like a victim—we feel compassion for her and root for her to reach her goals. These dark parts include her partial estrangement from her Vietnam veteran father, who had cheated on her mother before abandoning the family; sexual molestation by her brother’s friend when she was 12; being bullied as a teenager and beyond due to her weight—including being shot in her butt by local boys; regularly bingeing until her stomach hurt and she hated herself; and meeting her husband’s family for the first time terrified that they would reject her for her largeness.

One caveat about this memoir. Whitely’s decision to have gastric by-pass surgery stems from her belief that she would not resolve her lifetime of binge-eating Disorder (BED) without it. Once she signs up for surgery, she starts going to therapy to learn how to manage her appetite. It’s unfortunate that she failed to seek out a therapist trained to treat emotional and overeating before deciding on such risky surgery because this modality is a primary, essential treatment for BED. Had she sought it out earlier in her life, she might well not have needed the surgery. This gaping omission in her recovery is unfortunate for her and for readers who may, like Whitely, not be aware that psychotherapy by a clinician trained in eating disorders is the treatment of choice for eating or weight concerns.