A Week at the Shore: A Novel 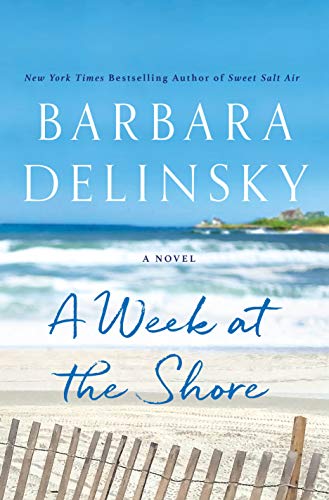 “the unique personalities of the complex characters along with a bit of mystery make this an involving read.”

Not all families are like those as seen on the old TV shows such as Ozzie & Harriet or The Brady Bunch. Dysfunction usually exists between the husband and wife, the parents and the children, or with the siblings. This is the case with the Aldiss family.

Sisters Margo, Mallory, and Anne got along relatively well as youngsters, but their relationships disintegrated 20 years prior when they were teenagers. Their dad took their mother's best friend and neighbor, Elizabeth McKay out on his boat, per her request, and returned home without her.

Tom Aldiss, patriarch and, a well-respected superior court judge in the small coastal town of Bay Bluff, Rhode Island, asserts he doesn't know what happened to her. The supposition is that she committed suicide, though several townsfolk believe Tom threw her overboard. Her body is never located, so there was no conclusive evidence, which adds to the mystery of this plot. The circumstances of this "accident,” ended Tom's marriage to Eleanor, and when Eleanor moves to Chicago, the girls are at a loss.

An irascible husband and father, he gets no warmth from his wife or children; nor does he offer much. Margo soon follows her mother, marries, and has two sons. Mallory, with the most contentious relationship with her father, relocates to New York City at age 19. She builds a life and later gives birth to Joy through IVF and works at a fulfilling career as a photographer. It is Anne who remains in the family home to care for her father when he is diagnosed with Alzheimer's. She owns and operates a favorite breakfast eatery known as Sunny Side Up and feels it is her duty to watch over their aging father.

Mallory's childhood best friend and a teen she once loved, Jack Sabathian, calls Mallory in New York to inform her Tom came to his door and threatened him with a gun. Knowing Tom is losing his senses, he also informs her the Aldiss home is falling into disrepair.

Jack is the son of Elizabeth, the neighbor who allegedly perished in the boating accident 20 years prior. Since then his relationship with Tom and Mallory has been contentious, leading to Mallory's departure, caught between the father she loved—though she never believed he loved her—and the boy she also cared for. After all this time, Jack still needs to get to the bottom of what happened to his mother. Now he is more than worried:

"'Well, hello, Mallory . . . here's the thing. You need to step up to the plate. If he's [Tom] talking about that night to me, he's probably talking about it in town. Bay Bluff may be only a tiny corner of Westerly, but the police love the coffee your sister serves in her shop. If he's babbling, they'll hear--and hey, I'm all for it. He killed my mother. I want it coming out. Don't you? 'Course not. So, here's a wake-up call,' the slightest pause before an accusatory, 'Mallory. Either you do something about him, or they will.'"

Mallory phones Anne with concern. Could her father be going around brandishing a gun? Does he even have a gun? This could prove disastrous considering his current condition; however, Anne refuses to believe Tom is ill, saying he's just getting forgetful, which is normal for his age.

Joy, listening in on the conversation, insists they go to Rhode Island, wanting nothing more than to be part of a family. But Mallory does not want to return to the place where she lived with such heartache. Persuasive 13-year-old Joy knows how to get what she wants, and they head east without notifying Anne. As they are arriving, Anne calls Mallory informing her Tom has had a fall and broken his wrist. Mallory states they'll be at the Urgent Care center soon for they're nearby.

Not expecting a warm welcome from her dad, Mallory is pleased when he takes a shine to Joy. Then upon encountering Jack, she doesn't know how to act. She looks at him, feeling that old spark, but is renewing a friendship with him unattainable?

Now, the sisters in their late 30s and early 40s are rejoined. Margo and her family arrive, and Joy is ecstatic to spend time with her cousins and aunts. She, too, quickly bonds with Jack and his lovable pit-bull, Guy.

As Jack still searches for answers about her mother, Mallory questions her childhood. She is fearful Tom may have killed Elizabeth, though knowing Jack won't give up his quest, she and her sisters need closure, too. Tensions escalate as the women acknowledge their worries and concerns regarding their parents and their history.

Relaxed and somewhat happy in her childhood home, Mallory is in a quandary. Can she put the past behind her? Things come to a head after an argument between the three as Mallory states:

"We aren't kids now, but there's something about family being reunited in the family home that unearths long-buried resentments.

"And then there's the issue of my guilt. Much of what Ann said to Margo applies to me. I haven't been back to help with Dad. I didn't help with Mom either. So here we are, my sisters and I, still worlds apart."

A Week at the Shore is a highly emotional novel of family dysfunction, hidden secrets, insecurities, and the desire to start fresh. The well-described and serene beach location and the unique personalities of the complex characters along with a bit of mystery make this an involving read.